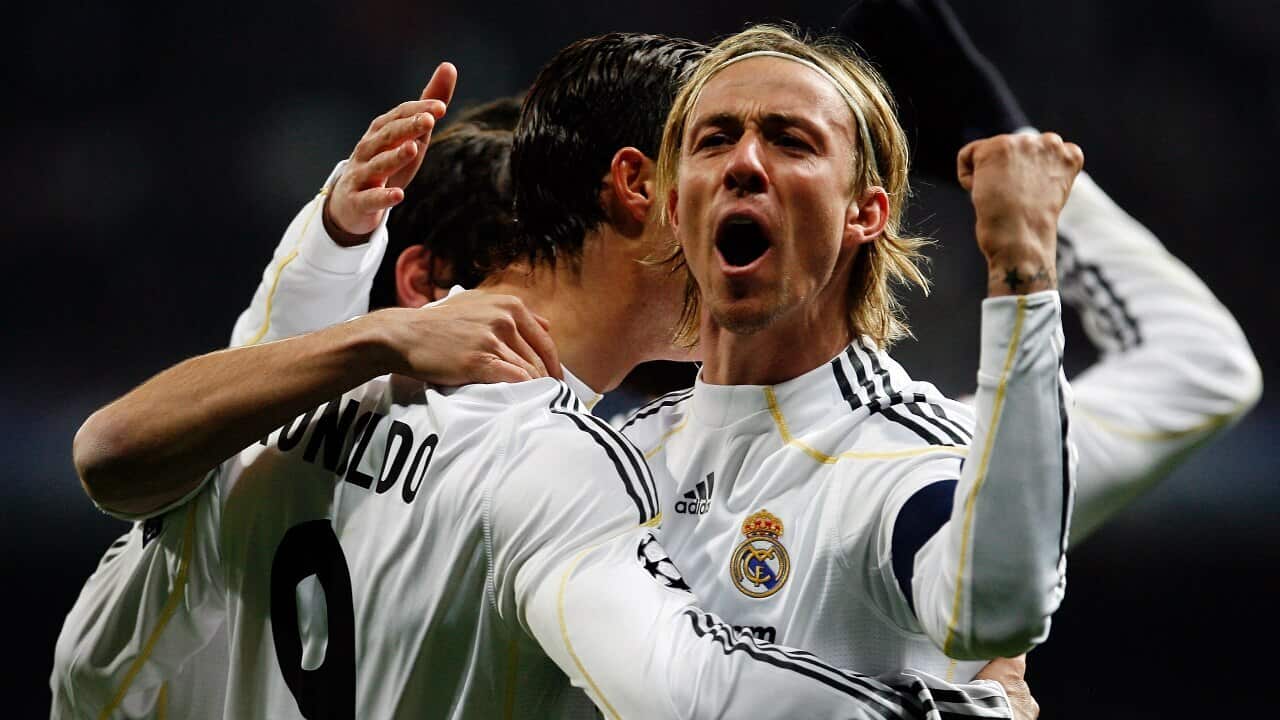 With the struggling A-League club inundated with over 50 CVs since Paul Okon’s resignation last week, owner Mike Charlesworth has been made aware that the former Galactico turned Las Blancos under-19s mentor is surprisingly amongst them.

Hailed by former Santiago Bernabeu teammate Figo as a potential Pep Guardiola in the making, the 41-year-old led his Madrid’s youth team to a domestic treble last season, as well as the last eight of this season’s UEFA Youth League.

And his knowledge of youth development may be of particular interest to the Mariners, who have traditionally been an incubator of future stars such as Mat Ryan, Tom Rogic and Trent Sainsbury.

Advertisement
A flamboyant playmaker during his 24-years ascending all the age levels at his boyhood club, Guti played alongside Ronaldo, Zidane, Roberto Carlos, Raul and David Beckham in his pomp.

He retired in 2011, after a final season at Besiktas, having accumulated 14 career trophies over 542 games for Madrid, including three UEFA Champions Leagues and five La Liga titles.

Those already in the mix for the role vacated by Okon include former Mariners John Hutchinson and Tony Vidmar and ex-Newcastle Jets coach Scott Miller.

But the availability of Guti, who has been part of Real’s youth set up since 2013, is a tantalising possibility.

Charlesworth, who is looking to make an appointment for next season, said: “There are an awful lot of candidates and there’s no hurry.

“We have time on our side and we’ll talk to a lot of people to find the one who is the best fit for us, whether it’s local or overseas.”

With FIFA to soon rule on Australia’s ongoing governance crisis and the prospect of a largely independently administered A-League a strong possibility, Charlesworth sees the club’s attractiveness growing expediently.

“I think if that comes to pass you’ll see more money flow to the clubs and we’ll all be able to broaden our horizons, including a higher calibre of coaches,” he added.

“There’s a list of criteria and one will be man management and communication skills, as well as building on the tradition of producing players who will one day go in to play in bigger competitions across the world.

“The interest we’re getting now might just be the tip of the iceberg.”

Okon’s departure, he said, was largely precipitated over dissatisfaction over a horror run of results.

But Charlesworth is also looking for something “more exciting in terms of style”.

“I don’t think we were playing a brand of football that excited people and you combine that with results, then what can you say?” he added.

“As far as a successor is concerned it’s really a blank canvas right now.

“We’re looking at anything and everything but I imagine we’ll end up with something very interesting.

“We want to be exciting but we also want to win games as well.

“We already have some of the best kids in the country and I see no reason why we shouldn’t be competitive.

“If these kids don’t step up then we’ll move on and find youngsters that do.

“I think we have to be smart and really shrewd going forward.

“We’ve made mistakes with visa players this year and we need to guard against that happening again.”

Charlesworth has shown in the past he isn’t afraid to up the ante, bringing in former Liverpool and Barcelona star Luis Garcia at the tail end of his career back in 2016.

Despite residual rumours of Celtic circling the Mariners with a view to a possible takeover, Charlesworth was adamant that no such interest exists.

“There’s never been any serious interest from anyone to buy us out, I can certainly confirm that,” he declared.

“I think that’s partly down to the operating model of the league. I think once we get to an independent structure it will attract a lot more interest and a lot more investment.

“It’s vital we get that independence, which would be great for all the clubs. Not just the Mariners.

“For me, selling is not a priority and not on the agenda right now but you never shut the door.”