Central Coast Mariners are considering asking FFA for permission for Usain Bolt to wear a shirt with the iconic number ‘9.58’ on the back, if he’s successful in winning an A-League contract. 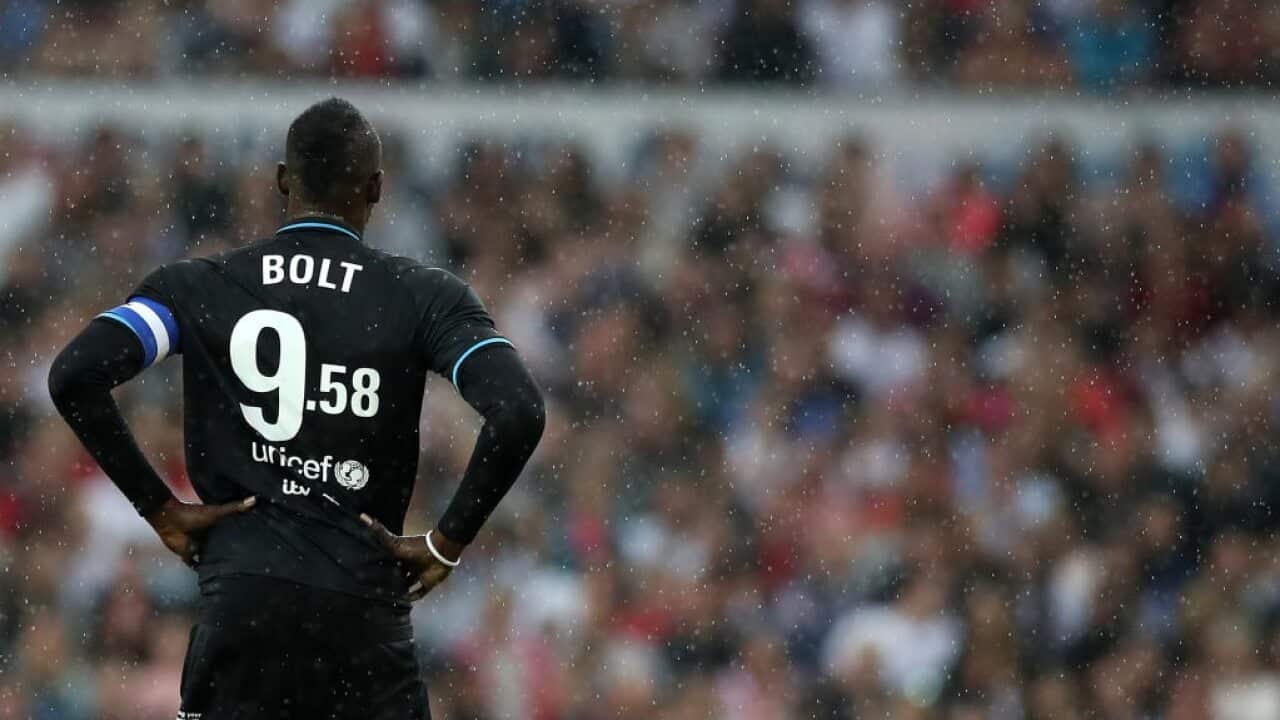 That’s the time it took the Jamaican sprint king to cover 100m in setting the world record back in 2009 at the World Championships in Berlin.

Whether it would be permissible or not under FFA rules - and the answer is likely not - it provides an indication at the level of confidence owner Mike Charlesworth has in the 31-year-old would-be footballer proving more than simply a publicity magnet during in six-week trial in Gosford.

However CEO Shaun Mielekamp put some perspective on the plan when he said: “We’re nowhere near that. I don’t think it would be approved but ’m not even in that position.

Advertisement
“We’ve got to make sure he gets here for the trial first. There is still a fair bit to do.

“Were hoping to complete the negotiation components within the next week and a bit and hope to have him here by August.”

Bolt wore the same number in a charity match for Unicef last month in London, where he skippered a Soccer Aid World XI, co-coached by Eric Cantona and Harry Redknapp, and featuring Robbie Williams, Kevin Pietersen and Yaya Toure.

Charlesworth believes that under Mike Phelan, the former Manchester United assistant coach who has taken over as Mariners sporting director, Bolt can make the quantum leaps which could earn him a deal.

Those sentiments are backed up by Mielekamp, who revealed that initial talks were held with Bolt and his management five months ago and the club had already closely studied scouting reports from Borussia Dortmund and Norway’s Stromsgodset - teams he has trialed and trained with in the recent past.

“From where they first got him to where they finished with him, he showed dramatic improvements,” Mielekamp said.

“So when we get him for six weeks we’re hoping to see a similar level of improvement under (coach) Mike Mulvey and Mike Phelan.

“Then a decision will be made whether he is up to standard.”

The approach for Bolt - which would need at least partial financial backing from FFA were it to progress to the contract stage - is already being ridiculed by football purists on social media.

Mielekamp admitted: “He has to be good enough otherwise it turns into a bit of a laughing stock.”

It’s understood that Sydney-based player agent Tony Rallis, the driving force behind the venture, offered Bolt to all the A-League clubs, with only the Mariners opting to take the plunge into the unknown.

“The most engaging part of this has been the determination of Usain himself,” added Mielekamp.
“He’s very passionate about it and he backs himself. His management group is very supportive of him and they are very confident that he will pass the trial.

“They’ve had a good look at the A-League and they really feel that it’s the right level for Usain. If it came to a contract we would need FFA support.

“But they are as intrigued as we are right now to see how things go with the trial.”

Answering those who have depicted Bolt’s latest escapade as the Big Top coming to town, Mielekamp said: “It’s not a circus if he comes and trials and fails because we’ll give him good feedback.

“For it to work he has to play and help us win games and score goals. It could turn into something exciting.

“It’s important for him and the club that it’s a perfect fit. If it’s not then that’s ok. Nobody is going to kill us for having a look at an opportunity.”

One UK-based agent, who has been following Bolt’s post-athletics life, took a more cynical view, saying: “It’s like Dwight Yorke without the football.”