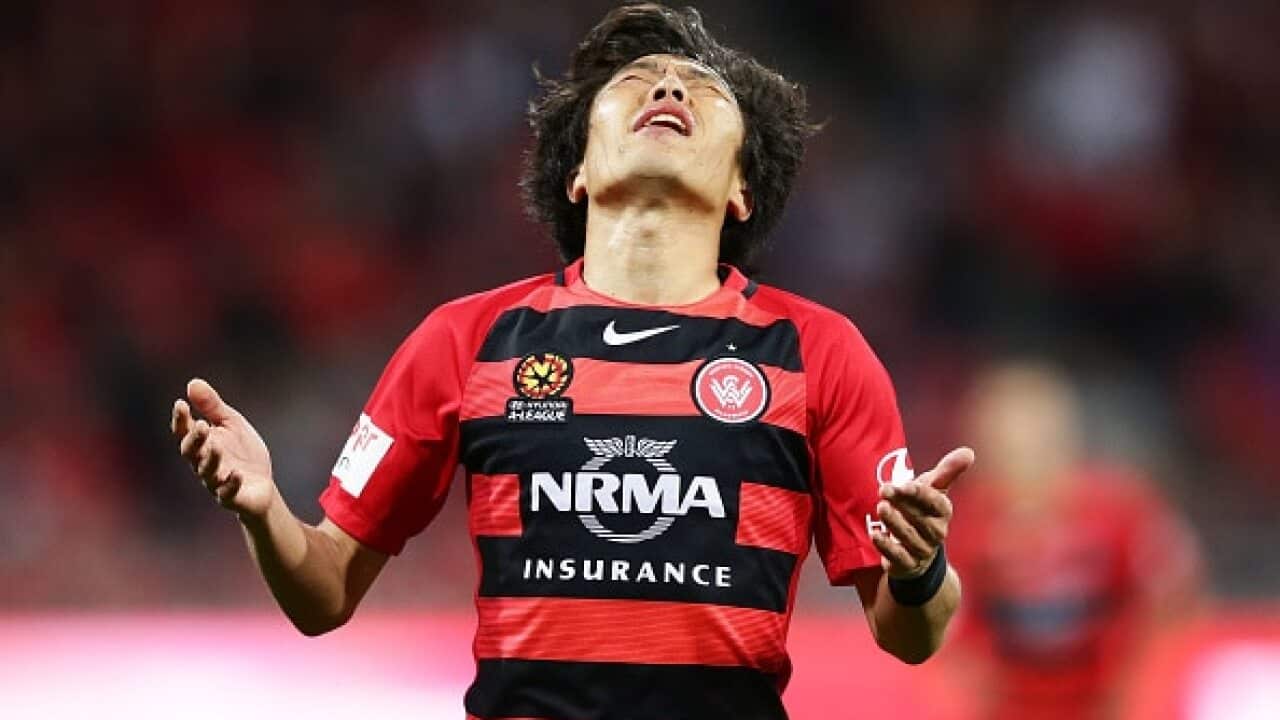 Jumpei Kusukami's performance was one of the highlights in a frustrating night for Western Sydney Wanderers. Source: Getty Images

First half goals from Spaniards Aritz Borda and Dimas Delgado put the Wanderers in total control against a Jets side that came into the match undefeated.

However in the 81st minute Redmayne ran out but failed to claim a cross that Jets defender Nigel Boogard - his second in as many matches - headed home.

Just seven minutes later Redmayne failed to keep out a long-distance free-kick from Andrew Hoole, despite getting both hands to the ball, meant the score finished 2-2.

Advertisement
Boogard's goal represented a milestone for Australian football - the 20,000th in Australian National League history across the A-League and National Soccer League.

While looking well beaten for much of the match, Newcastle had started brightly.

In the end it was a momentary lapse that gifted the Wanderers the opening goal.

New captain Dimas sent a deep corner into the box for fellow Spaniard Borda to meet with a glancing header over the line that could have been avoided had a player guarded the back post.

Then, in the shadow of halftime, Steve Lustica chipped a ball into the path of Ben Kantarovski, who committed an obvious handball in the area, making way for Dimas to step up to the spot and send Jets custodian Jack Duncan the wrong way.

From there the Wanderers were quick to pounce on turnovers and made it tough for the Novocastrians to pass out of their own half.

The Jets suddenly then rediscovered their impetus, Devante Clut unsuccessfully attempting to lob Redmayne and Nabbout firing wide from the edge of the box.

In a massive blow, Nabbout appeared to badly hurt himself in his effort and was promptly subbed off to join injured teammate Lachlan Jackson on the sidelines.

Man-of-the-match Jumpei became more and more difficult to contain, at one point roasting three defenders and forcing one of several fine saves from Duncan.

But no one expected such a late comeback, delivered under pressure by Boogaard and Hoole.

"I was disappointed with the start, and to concede just before halftime was tough to deal with," Jones said.

"But mentally we wanted to hang in there ... and we thought in the last 20-25 minutes we'd get something out of the game."

Tony Popovic felt the Wanderers should have finished the Jets off early in the second half.

"Then they started getting a lot more territory and put us under pressure," he said.

"You could sense that something was coming, but we certainly didn't play the last half hour like we did in the first 60 minutes."