Tim Cahill believes that his return to Australia with Melbourne City has reinvigorated his love of the game. 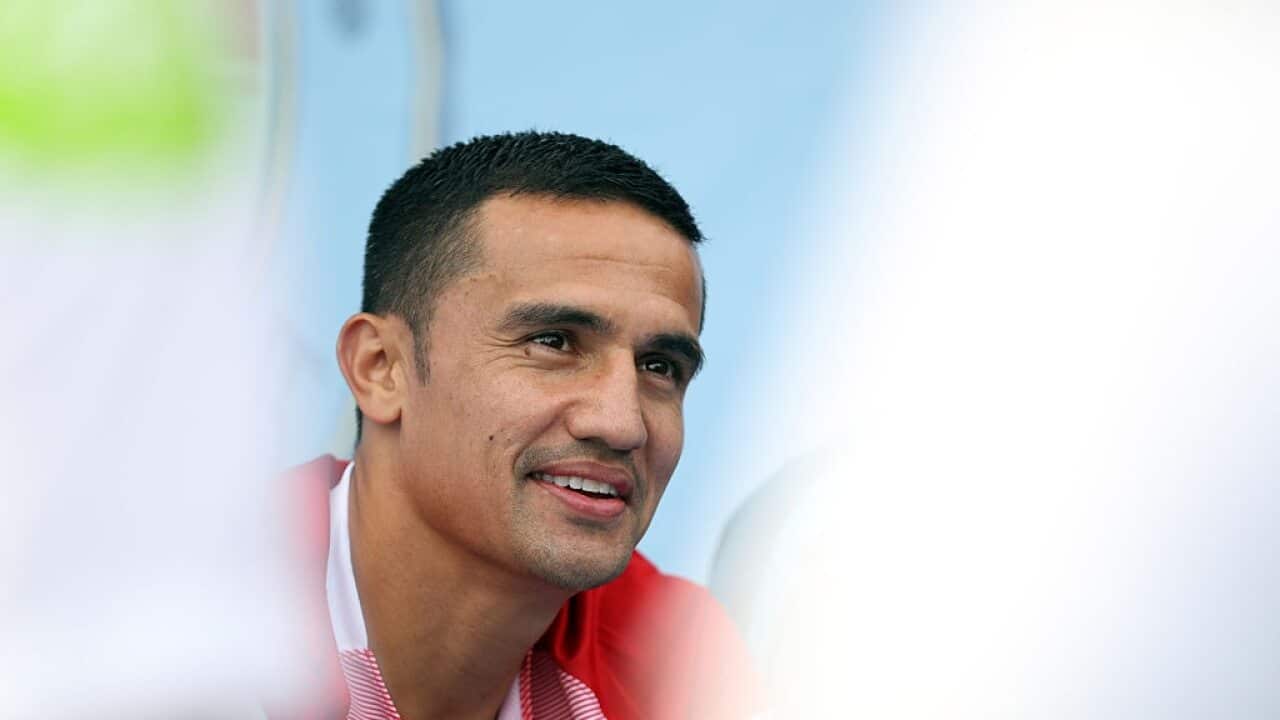 There couldn’t have been a more 'Melbourne way' for Tim Cahill to have arrived at the Melbourne City fans’ day on Saturday - on a tram.

But this wasn’t any old rattler. Decked out in club livery, Cahill stood on the steps of a specially-commissioned tram, wearing the club’s new away kit and posing arm-in-arm with his new strike partner, Uruguayan Bruno Fornaroli.

Hundreds turned up to welcome the champion forward, who took time to sign countless autographs and take an endless stream of selfies with star-struck supporters.

But the 36-year old lapped it up, saying he was rapt the public was so eager to welcome him to the A-League after two decades abroad.

“This is pretty special, interacting with the fans like this... It’s awesome and this is why you do it - if you can help kids be inspired by football, young boys and girls, we’re doing our job.” Cahill said.

“We’ve been speaking about how important it is for us to engage the fans, have these activations and many more throughout the year because on the park we’ve got to do the business, but, off the park, we’ve got to spend time with them.”

After making his first hitout for his new club in the 2-1 win over the Brisbane Strikers in the FFA Cup on Wednesday night, Cahill said he liked the idea of going all the way in Australian football’s newest major tournament.

“It was great. Not playing for six or seven weeks, it was a good chance to run out with the boys.” he said.

“We watched the video back and we can reflect on what we did on the pitch, but the objective was to win and make the last eight of a big competition. This is a massive club, we want to do big things for it. I’m just glad to contribute and be a part of it.”

Cahill said his adjustment period had been virtually seamless and he felt the group was ready to bind together and strive for their first championship.

“It’s been easy. I had to sing the other night but so did Neil Kilkenny and a few of the other lads - even the staff.” he said.

“I think this is all about the togetherness of what we’re trying to create. Most of the team signed for 2-3 years, so whether we like it or not, we’re stuck with each other. The basis of what we talk about is that we win together and lose together and we’re going to live and die by that. We’re really going to challenge each other."

Never far from Cahill’s mind are his international duties and on Sunday he will link up with the Socceroos for their opening final round World Cup qualifier against Iraq in Perth, all part of a gruelling travel schedule he's roughly half-way through.

“Getting off the plane from New York straight away, then going to Brisbane, then back, and then to Perth tomorrow, to the UAE and then to Townsville to meet the boys is pretty hectic." he said.

“But it’s been managed well.

"The professionalism of this club is exceptional and I’ve just been really happy with how everything has been done, from the commercial side to the football, to the training.”

Despite travel and his aging legs, Cahill says coming back to Australia has given him a new zest for the game.

“I feel rejuvenated. I’ve come back to Australia and while I know there’s going to be a lot of pressure, I think you have to test yourself and try your hardest to be a good example.” he said.

“The bigger picture is from the big bosses in Manchester and those involved in the club. They have a clear scope of what they want to do and I’m just happy they made me a part of it.”