Roglič peerless at Paris-Nice as he upsets the puncheurs

Primož Roglič (Jumbo-Visma) again proved why he's one of the best cyclists around, this time beating out Michael Matthews (Team BikeExchange) and Christophe Laporte (Cofidis) on their prefferred terrain, an uphill sprint, to win Stage 6 of Paris-Nice. 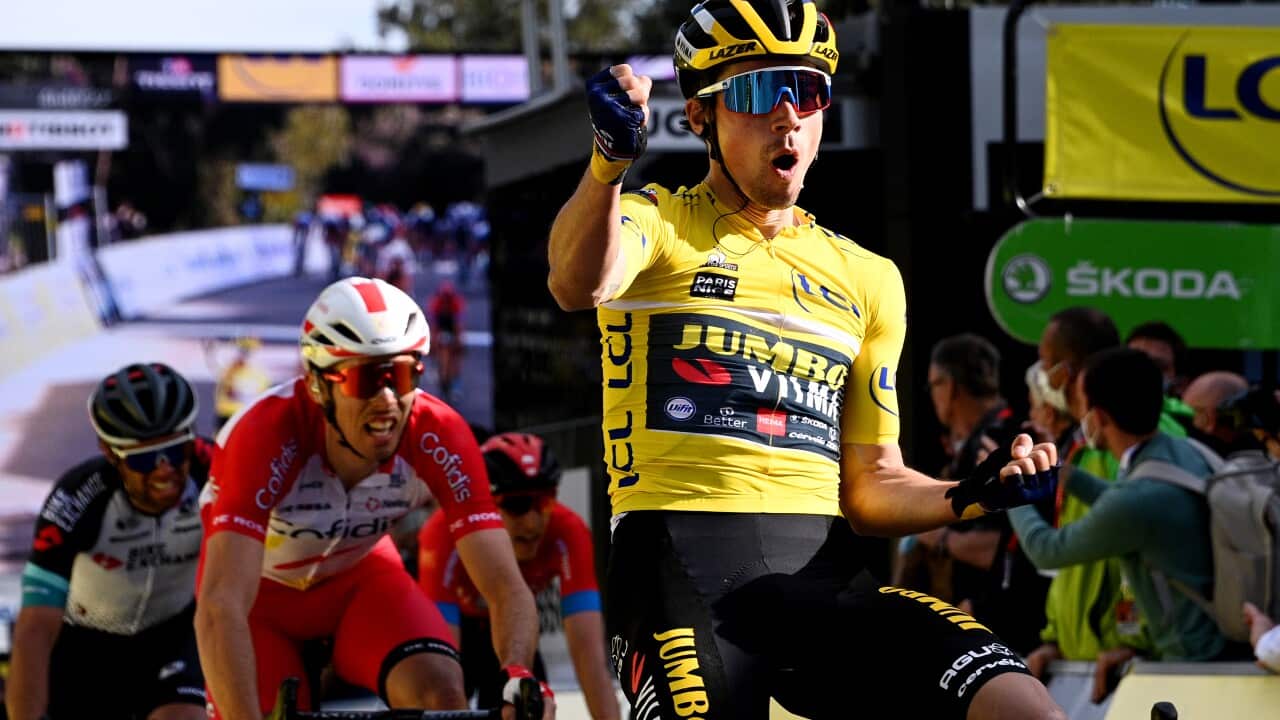 Primoz Roglic accelerates away to win the punchy finale of Stage 6 of Paris-Nice Source: Getty

With the catch of the break inevitable, it was clear that the race would come down to the final few kilometres of climbing on the five per cent gradients into Biot. With sprinters being jettisoned rapidly out the rear of the peloton, it was Roglič who brought to mind a similar surprise victory at the Vuelta a Espana in 2020 where he surprised the sprinters to do so again.

This time it was Laporte and Matthews who were left ruing what might have been as the Slovenian star rode away in a show of strength from the fast men.

“It’s just cool to win like this," said Roglič. "It’s something new again and I’m super, super happy to do it. It was just the whole day really hard, really from the beginning, and that’s why I thought at the end, ‘We’re all tired, so why not?’ It was beautiful that I could do it.”

Paris-Nice organisers made the announcement that Stage 7 has been shortened to 119km, though the summit finish at La Colmiane has been retained, while the final stage has been cut to 92.5km and will now feature an uphill finale at Levens.

“I have to deal with it, what they give us,” race-leader Roglič said of the changes. “I don’t really care about it. I just expect full gas racing because they are quite short both of them.”

The long haul from Brignoles looked like a day for the break but the uphill final few kilometres into the finish at Biot was a clear incentive for sprinting puncheurs like Michael Matthews. With the push and pull effect of those competing ambitions, the peloton was in no mood for a break to go easily on the opening flat portion of the stage, averaging almost 48km in the opening hour of racing.

Matteo Trentin (UAE Team Emirates) and Florian Senechal (Deceuninck-QuickStep) formed the only move to gain any early traction, but they never got more than 15 seconds or so and they soon drifted back to the main bunch.

The break of the day finally took shape over the first classified climb, the Côte des Tulières, where polka dot jersey Anthony Perez (Cofidis) made an attack in an attempt to secure himself mountains points. He was joined at the top by Elissonde, Julien El Fares (EF Education-Nippo), Alexey Lutsenko (Astana Premier Tech), Jonathan Hivert (B&B Hotels p/b KTM), and Victor Campenaerts (Qhubeka-Assos) and they would eventually build a maximum lead of 4 minutes over the peloton.

Third overall at the start of the stage, Brandon McNulty’s (UAE Team Emirates) race came to an untimely end with a crash at the base of the category 1 Côte de Cabris.

Perez and El Fares were dropped from the break on the climb towards the intermediate sprint at Cipières, while the speed in the bunch saw several fast men jettisoned out the back. The bulk of them made it back on, but it was an ominous sign ahead of the uphill finale.

Elissonde found himself alone at the front with 22km to go after dropping Campenaerts and Hivert on the climb towards the second sprint at Roquefort-les-Pins.

As the bunch closed to within touching distance of Elissonde with 13km to go, Jonas Rutsch (EF-Nippo) bridged across alone, the big German’s strength ensured that duo remained clear until the road began to rise once again towards the finish.

Sprinters began exploding as Senechal set a ferocious pace up the final climb, which in the end proved to be in aid to Roglič.

Guillaume Martin tried to pre-empt the sprint by accelerating from 400m to go, but Roglič took up the chase, extending his acceleration into a sprint that gapped Laporte and Matthews and left the Slovenian peerless at Paris-Nice.