Primož Roglič (Jumbo-Visma) put in one big attack on the final climb of Stage 4 of Paris-Nice and immediately established a gap that he would keep to the finish, winning atop the climb to Chiroubles. 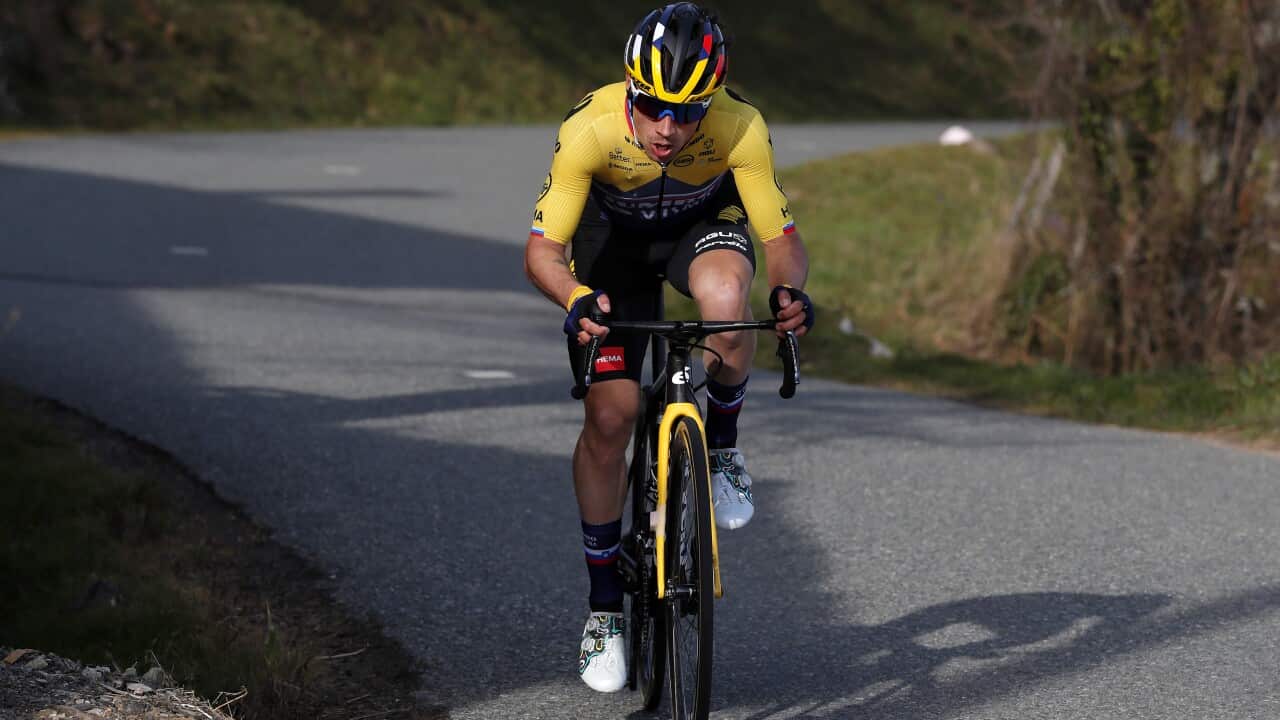 Primoz Roglic of Team Jumbo - Visma surges away to the win at Stage 4 of Paris-Nice. Source: Getty

Roglič patiently waited for the finale of the winding 4th stage of Paris-Nice in the vineyards of the Beaujolais to surge and win his first stage of the 'Race to the Sun' and take the yellow jersey away from Swiss rider Stefan Bissegger. The Jumbo-Visma team leader attacked in the grueling final climb to Chiroubles, to cross the line with a 12 seconds lead over what was left of the bunch, led by defending champion Maximilian Schachmann (BORA-Hansgrohe) and Guillaume Martin (Cofidis).

“I am very happy with the result”, Roglič said. “Yesterday we already showed that we are in good shape. The course suited me well today with all the short climbs. It was tough, but thanks to the team it worked out in the end.

"We controlled the race and at the end I still had enough energy in my legs to get away. It feels good that I’m now wearing yellow in Paris-Nice. The goal is to keep the lead until Nice. We’re not there yet, but the team is strong. I am looking forward to the next stages in which we want to maintain this flow.”

Advertisement
The 3,500 metres of elevation on the hilly route were too much for stage 3 winner Stefan Bissegger, with Giro winner Tao Geoghegan Hart (Ineos Grenadiers) also falling out of contention after a crash with David Gaudu on a descent.

The group of six extended their lead out to four minutes over the chasing peloton, the gap only coming down when a concerted pusruit began over the ascents of the difficult climbs of Mount Brouilly.

Bernard hit out alone from the break with 20 kilometres remaining, quickly forging a significant advantage on his erstwhile companions.

Back in the peloton on the descent from Mont Brouilly there was a moment of drama as Geoghegan Hart and Gaudu hit the deck. They both got going soon afterwards, but the Briton was later seen freewheeling along and examining his wrist as Gaudu mounted a chase back to the head of the race with Groupama-FDJ teammate Bruno Armirail.

Cavagna and Sánchez made it to within 15 seconds of Bernard as they started the final climb to Chiroubles, but disaster struck the Frenchman as Cavagna was clearly stuck in the wrong gear, later saying that he believed his battery had gone flat. With little that could be done immediately to correct the problem, he stood at the side of the road as the peloton passed him.

Sánchez caught Bernard with 5.5 kilometres to go, with the peloton breathing down their necks just 30 seconds further back with Jumbo-Visma, BikeExchange and UAE Team Emirates at the head of affairs. Pierre Latour (AG2R-Citroen) made a move at the four-kilometre mark, but the Frenchman was soon brought back – along with Bernard – by a strong surge from Michael Matthews (Team BikeExchange).
Latour attacked again to jump clear, inviting a response from Roglič, with Ion Izagirre (Premier Tech-Astana) trying to follow and Matthews jumping across in an unsuccessful attempt to grab points at the intermediate sprint three kilometres from the line.

Roglič caught and passed Sánchez, ekeing out 20 second lead by the final kilometre. With noted climbers like Alexander Vlasov (Premier Tech-Astana), Schachmann, Hamilton, Guillaume Martin (Cofidis) and Tiesj Benoot (Team DSM) in pursuit, the chasers did bring back the lead by a little in the closing kilometre, but the Slovenian star prevailed by 12 seconds at the finish.
SHARE
Watch the FIFA World Cup, Tour de France, Giro d’Italia, Vuelta a España, Dakar Rally, World Athletics / ISU Championships (and more) via SBS On Demand – your free live streaming and catch-up service.
Watch now