Roma net five despite Dzeko's miss of the decade contender

Exiled AS Roma captain Francesco Totti watched from the stands as the Giallorossi enjoyed an emphatic 5-0 Serie A victory over Palermo without him - which included a miss from Edin Dzeko that will long live in the memory. 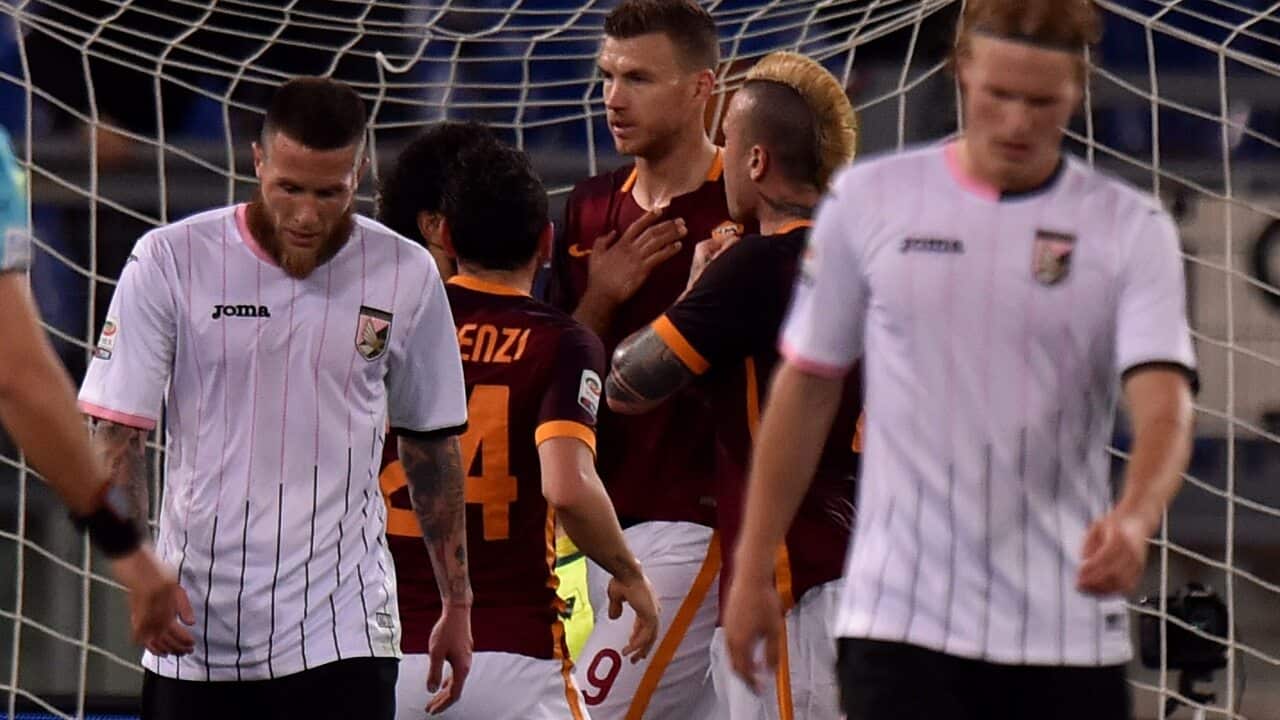 Totti, 39, has barely featured this season and the club captain found himself cut from the squad completely after publicly criticising coach Luciano Spalletti.

Advertisement
Totti attended the game despite having earlier been sent home from the squad's training base over comments he made regarding his future and relationship with Spalletti.

Totti, who has been at the club since joining the youth team in 1989, was cheered by the home fans as he took his seat in the stands to witness a resounding win over the relegation-threatened Sicilian side.

And Roma more than proved they can cope without their talisman. Dzeko atoned for a glaring first-half miss with a goal in each half, with Seydou Keita and Mohamed Salah - providing his own acrobatic brace - propelling the capital club towards a resounding 5-0 win and above Inter Milan into fourth place.

Dzeko had an easy chance to open the scoring in the 28th minute. However, to the horror of his team-mates, the Bosnia striker - standing four yards in front of an empty net - managed to side-foot Maicon's low cross past the near post.

The former Manchester City forward looked for the ground to swallow him up, but his embarrassment would not last long as he did notch up the opener two minutes later.

Miralem Pjanic's cross from deep should really have been cleared by Palermo's Aljaz Struna. Instead it reached Dzeko and he chested the ball down before slotting home.

Malian midfielder Keita doubled Roma's lead from an Alessandro Florenzi corner seven minutes after the break and Salah took that as his cue to begin dazzling the Stadio Olimpico crowd.

The Egyptian made it 3-0 when rifling Dzeko's assist across Fabrizio Alastra and, in the 62nd minute, scored his second from an improbable angle when the ball was about to go out of play at the byline.

Palermo were long since beaten when Dzeko headed home a fifth goal to lift Roma above Inter Milan and into fourth place.

Third-placed Fiorentina maintained their own pursuit of the title as a late flurry of goals downed 10-man Atalanta 3-2 in Bergamo.

Atalanta refused to roll over and halved the deficit through young defender Andrea Conti, who would later be dismissed in stoppage time.

Substitute Nikola Kalinic then grabbed what proved to be Fiorentina's winner and Mauricio Pinilla wrapped up the scoring with Atalanta's second at the death.

Sassuolo relaunched their bid for Europa League football by edging out Empoli, also by a 3-2 scoreline.

Domenico Berardi's first-half strike and a brace from Gregoire Defrel were enough to negate the effect of Piotr Zielinski's goal for Empoli and a late Massimo Maccarone penalty.

Both sides had a player sent off with Simone Missiroli walking for Sassuolo and Lorenzo Tonelli seeing red for Empoli before half-time.

Genoa pulled clear of the drop zone with an overdue 2-1 win over Udinese at the Marassi.

Ali Adnan opened the scoring for the Bianconeri but Genoa responded with an Alessio Cerci penalty and Diego Laxalt's goal.

Veteran striker Antonio Di Natale could have snatched a point for Udinese in stoppage time, but Mattia Perin saved his penalty.

Elsewhere, Maxi Lopez missed a late spot-kick for Torino as relegation-threatened Carpi ground out a goalless draw in Turin and there was a stalemate between Frosinone and Lazio at Stadio Matusa.