England's failure to learn from previous mistakes allowed Russia to net a stoppage-time goal to secure a 1-1 draw, with a lack of cutting edge preventing Roy Hodgson's side starting EURO 2016 with the win their exceptional play deserved. 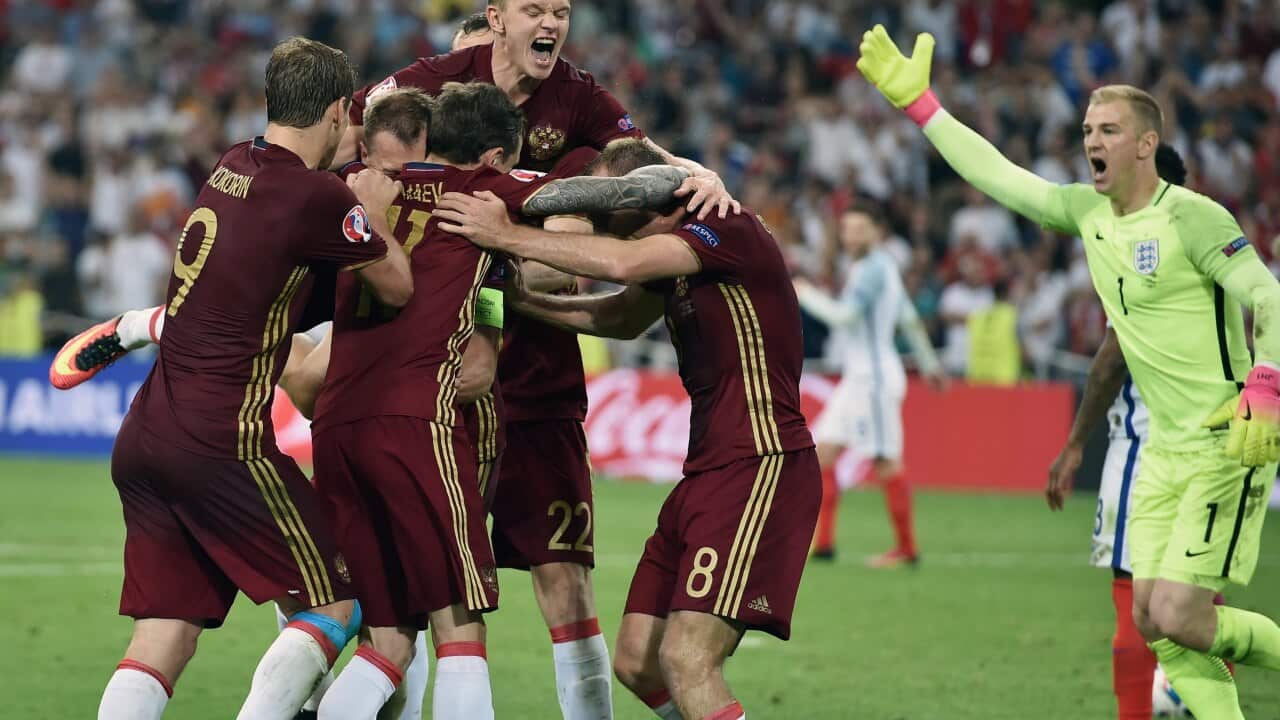 Sickening scenes marred the build-up to the Group B clash, with bottles, chairs and fists thrown during three days of trouble involving a mixture of English, Russian and French fans in Marseille.

There were more clashes at the end of the match at the Stade Velodrome, where a thumping Eric Dier free-kick cancelled out by Vasili Berezutsky as Russia secured a fortuitous draw.

At 25 years and 293 days, this was England's second-youngest line-up ever at a major finals and they showed no little exuberance, attacking from the outset.

Advertisement
The opening period brought nine shots but no goals, leading nervousness to grow as Leonid Slutsky's side grew into the encounter, with Joe Hart sparing Dier a second own goal in three matches.

Shortly after Wayne Rooney saw a strike brilliantly tipped onto the bar, the Tottenham Hotspur defensive midfielder fired home a fine free-kick - but England would pay for lacking the ruthlessness discussed in the build-up.

Berzutsky's header sent the Russian fans wild, although that excitement soon turned into more clashes that UEFA are likely to act on.

The atmosphere had been much more positive earlier, where England's start was as bold as their line-up suggested.

They were quickly trying to get behind Russian cumbersome backline and pressing hard, with Dele Alli hitting a snapshot wide from a third-minute Adam Lallana cutback.

Hodgson's side were completely dominant aside from Sergei Ignashevich's 17th-minute header, but the majority of action was at the other end as Rose collected an intelligent Raheem Sterling backheel and drove in a ball that almost found Alli from close range.

Lallana was the focal point of an exceptional team move that lead to the Three Lions' next chance, only for the 28-year-old to snatch at his shot after receiving Alli's cutback.

Kane was clearly offside when finally finding the net shortly after Igor Smolnikov thwarted Sterling, while Alli was just unable to get a telling touch after an exquisite Rooney pass split Russia's centre-backs.

England's talisman forced Akinfeev to punch after some wonderful footwork down the right by the inspired Tottenham midfielder, but that dominance did not see them into half-time with a deserved lead.

It led to some nervy moments when play resumed, with Aleksandr Kokorin's ball across goal forcing Smalling to intervene before Artem Dzyuba could threaten Joe Hart's goal.

Nobody was able to steer in Kane's powerful, low free-kick, then Rooney curled over from the edge of the box as England showed signs of life - but Russia were looking far more lively than they had.

There was a worrying moment when Oleg Shatov's corner found the head of the unsighted Dier, directing back towards his own goal and forcing Hart to prevent him scoring a second own goal in three matches.

Moments after Gary Cahill was booked for a foul on Dzyuba, the towering striker's presence proved problematic and allowed Fedor Smolov to sweep a curling right-footed strike just wide.

The shape that so impressed in the first half was getting looser as the match entered the final 20 minutes, but England nearly took the lead as Rooney hit a goalbound strike that Akinfeev did superbly to tip onto the crossbar, with Lallana hitting the post - unaware the offside flag had been raised.

Frustration quickly turned into joy thanks to a thunderous strike by Dier. Alli drew the foul out of Georgi Schennikov outside the box, with Tottenham team-mate powering the resulting free-kick across Akinfeev to send the raucous England fans wild.

Substitute Jack Wilshere brought replaced Rooney soon after and played a neat one-two with Kane before playing in Sterling to net again, although the offside flag had long been raised.

England's inability to eke out a second led to a stoppage-time suck punch as captain Berezutsky's header flew past Hart, although Denis Glushakov made sure at the back post.