Australia goalkeeper Mat Ryan kept a clean sheet as his Genk side defeated Romanian outfit FC Astra 1-0 to complete a 3-2 aggregate success to advance to the last 16 of the UEFA Europa League. 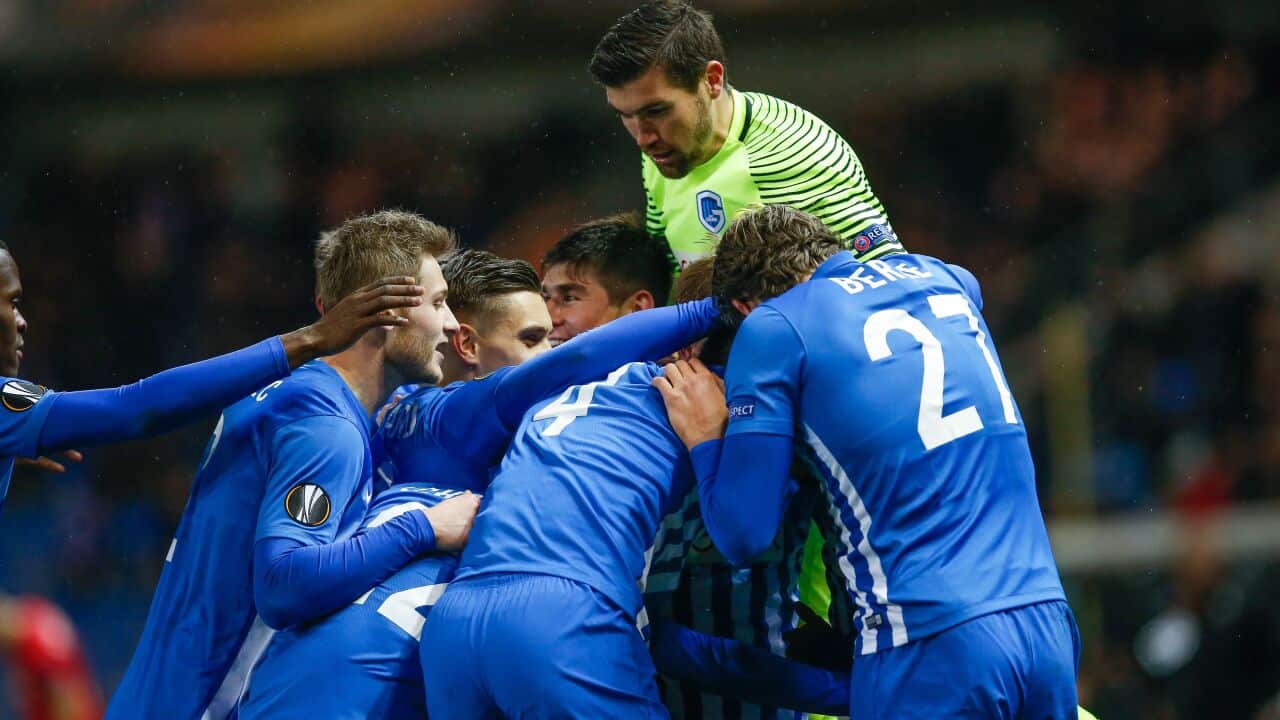 With the scores deadlocked at 2-2 after the first leg, Genk advanced thanks to captain Alejandro Pozuelo's 67th-minute free-kick in the second leg.

The win means Genk have a perfect home record in Europe this season - played seven, won seven - with Ryan and co finding out their opponents for the last 16 when the Europa League draw is made in Nyon on Friday evening AEDT.

Advertisement
There was plenty of action with the other matches offering no shortage of thrills in the race to reach Friday's draw for the next phase.

Pressure will be mounting on Fiorentina coach Paulo Sousa following their spectacular collapse at the hands of Borussia Monchengladbach.

The home side surrendered a 2-0 lead to lose 4-2 at the Artemio Franchi, allowing Gladbach to progress with a 4-3 aggregate triumph.

Nikola Kalinic curled in a fine opener before Borja Valero capitalised on Jannik Vestergaard's missed clearance to make it 2-0 on the night and 3-0 on aggregate with only 29 minutes played.

But Lars Stindl turned the tie on its head in the space of 12 minutes. The club captain converted a spot-kick shortly before the break, prodded the ball in from close range following a penalty-box scramble and fired in a fine finish - all before the clock reached the hour mark.

Gladbach suddenly had an away-goal lead and their stunning turnaround was made safe in the 60th minute, as Andreas Christensen headed in a fourth to send the visiting fans into utter delirium.

Mauricio Pochettino's Tottenham had been one of the favourites to win the tournament since their exit from the Champions League, despite their 1-0 first-leg defeat to Gent.

A turnaround at Wembley looked to be on the cards when Christian Eriksen levelled the tie after 10 minutes, but Spurs handed the initiative back to the Belgians before half-time.

Harry Kane headed into his own net to give Gent a valuable away goal, before Dele Alli was given a straight red card for a shocking tackle on Brecht Dejaegere.

Victor Wanyama gave Spurs hope with a blistering strike but Gent secured a 2-2 draw - and 3-2 aggregate win - thanks to Jeremy Perbet's 82nd-minute strike, which was, remarkably, their first and only shot on target.

Lyon laid down a marker for the rest of the tournament with a 7-1 second-leg thrashing of AZ, in which Nabil Fekir hit a hat-trick.

The 23-year-old's treble, along with goals from Maxwel Cornet, Sergi Darder, Mouctar Diakhaby and Houssem Aouar - his first for the club - capped a devastating display from Lyon that left AZ with nothing but a Levi Garcia consolation to celebrate.

Lyon's 11-2 aggregate victory is the second-biggest in the tournament's history, while it matches the record for goals in a single tie set when Porto - led by Radamel Falcao - defeated Spartak Moscow 10-3 across two legs in 2010-11.

Zenit were one of the bigger casualties of the round, with their 3-1 win over Anderlecht on Thursday not enough to prevent them losing on away goals following a 3-3 draw.

Athletic Bilbao were shocked by APOEL, losing 2-0 in the second leg and 4-3 overall, but Celta Vigo will represent LaLiga in Friday's draw after Iago Aspas' injury-time penalty and Cabral's extra-time header sealed a 2-1 aggregate win over Shakhtar Donetsk.

Elsewhere, Roma progressed despite a 1-0 loss to Villarreal, while Rostov, Besiktas, Ajax, Olympiacos, Copenhagen and Genk all advanced.