Australia defender Trent Sainsbury has called on the football community to adopt a 'no fear' approach as the Socceroos prepare for the final phase of qualifying for the 2018 FIFA World Cup. 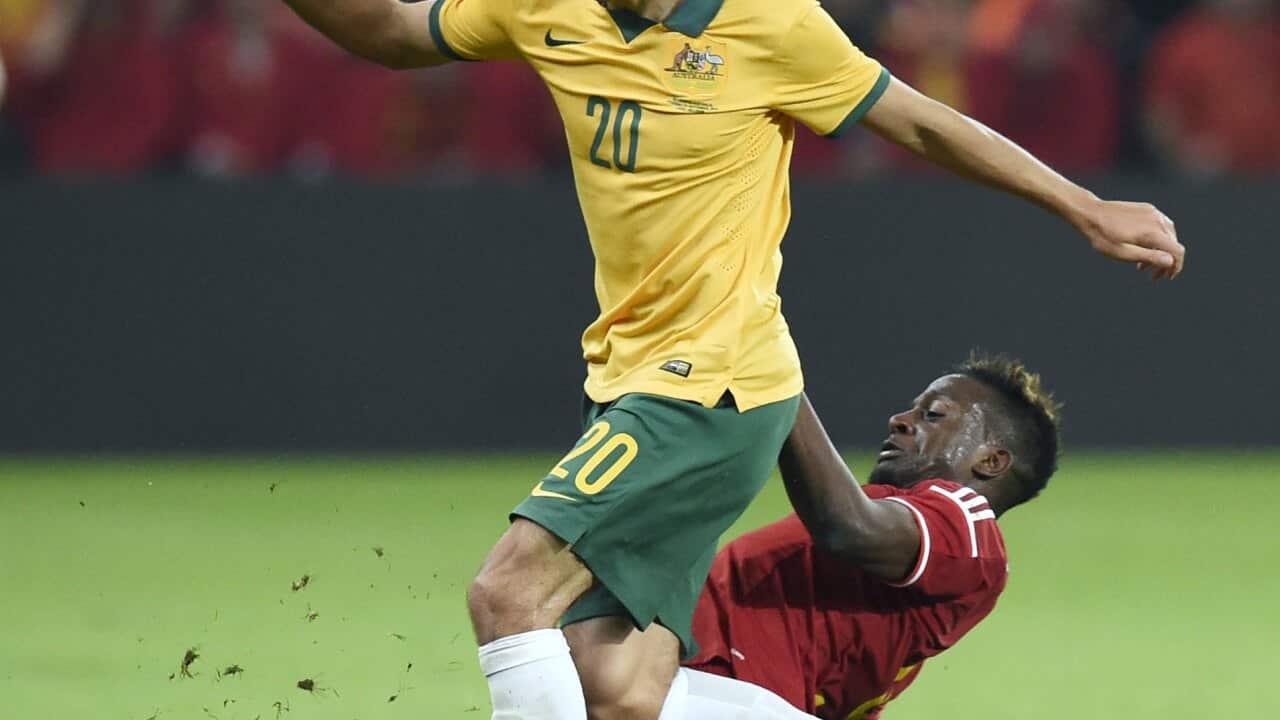 Sainsbury is expected to play a key role in the Socceroos' bid to beat Japan, Saudi Arabia, Iraq, Thailand and United Arab Emirates for a place in the finals in Russia.

Sainsbury has played only 16 times for Australia since making his debut in the international match against Belgium in September 2014 yet at 24 years of age he is now seen as one of the stars of the team.

Advertisement
"I see the final phase of qualifying as a big challenge," said Sainsbury from China, where he plays his club football for Jiangsu Suning.

"I would like us to send a statement that Australia are going to be a strong force whoever we play.

"I don't want to hide behind the underdog tag anymore. If we want to progress as a footballing nation we have to show this in the forthcoming qualifying games. It won't be easy but we all know it will be worth it."

These are indeed strong, fighting words from Sainsbury but the former Central Coast Mariners defender who helped Australia win the 2015 AFC Asian Cup means every one of them.

"I truly believe we should not fear any team. No matter who they are, who they have playing for them, who their coach is or what they've done in the past, " he said.

Sainsbury is expected to be picked for Australia's qualifier against the Iraqis in Perth on 1 September.

Perth-born Sainsbury missed the last match the Socceroos played in his home town last September due to injury and is obviously super keen not to miss out this time.

"Unfortunately I missed that game in Perth so fingers crossed I won't have any setbacks this time," he said.

"It may sound like a cliché but playing in front of family, friends and the doubters is what you dream of as a kid. Representing your country is always a big achievement but to do it in your home town adds that little bit extra"

Sainsbury is is no doubt that the Socceroos will be severely tested in the race for Russia.

"I think the media is focusing on this game versus Japan, which is the glamour tie," he said.

"However I know that the coaching staff will be focused on our first game against Iraq in Perth. And after that they will focus on our next game."

Sainsbury is in the first year of his three-year deal with Jiangsu, whom he joined in January from PEC Zwolle in the Netherlands.

Jiangsu are second in the Chinese Super League behind runaway leaders Guangzhou Evergrande but Sainsbury, who regards them as the benchmark of the league, is adamant his team are still on track to achieve their target of qualifying for the next AFC Champions League after crashing out at the group stage of this year's competition.

"It's been a difficult period for the team," he explained.

"Coach Dan Petrescu got the team off to a flyer in the first 10 games then he decided to part ways with the club and now we have former FC Seoul boss Choi Yong-soo who is trying to implement his own style on the team.

"Petrescu was very direct and didn't care if the ball ended up in row Z. His mantra was 'fight for the second ball off the striker and go from there'.

"The new coach has had very few actual tactical sessions because we have had many games in short succession.

"From what I've seen so far he likes a very spread-out team with the ball and he likes us to be extremely tight when without.

"I'm enjoying playing for him and he comes up with something new at every training session which keeps it interesting.

"It's an adjustment but we are all confident we can remain high on the ladder."

Jiangsu Suning's owners have made headlines in Europe in the last few weeks by acquiring a majority share in Serie A giants inter Milan.

So does this mean that through a quirk of fate Sainsbury could be auditioning for a contract in one of the top leagues of Europe?

"Everytime you play you're auditioning for someone so you never know what could happen," he said.

"A move to Inter would be a dream come true but at the moment I'm focused on Jiangsu Suning and the Socceroos."