When Trent Sainsbury made the shock move from PEC Zwolle in the Dutch Eredivise to Jiangsu Suning in the Chinese Super League it raised more than a few eyebrows back in Australia. 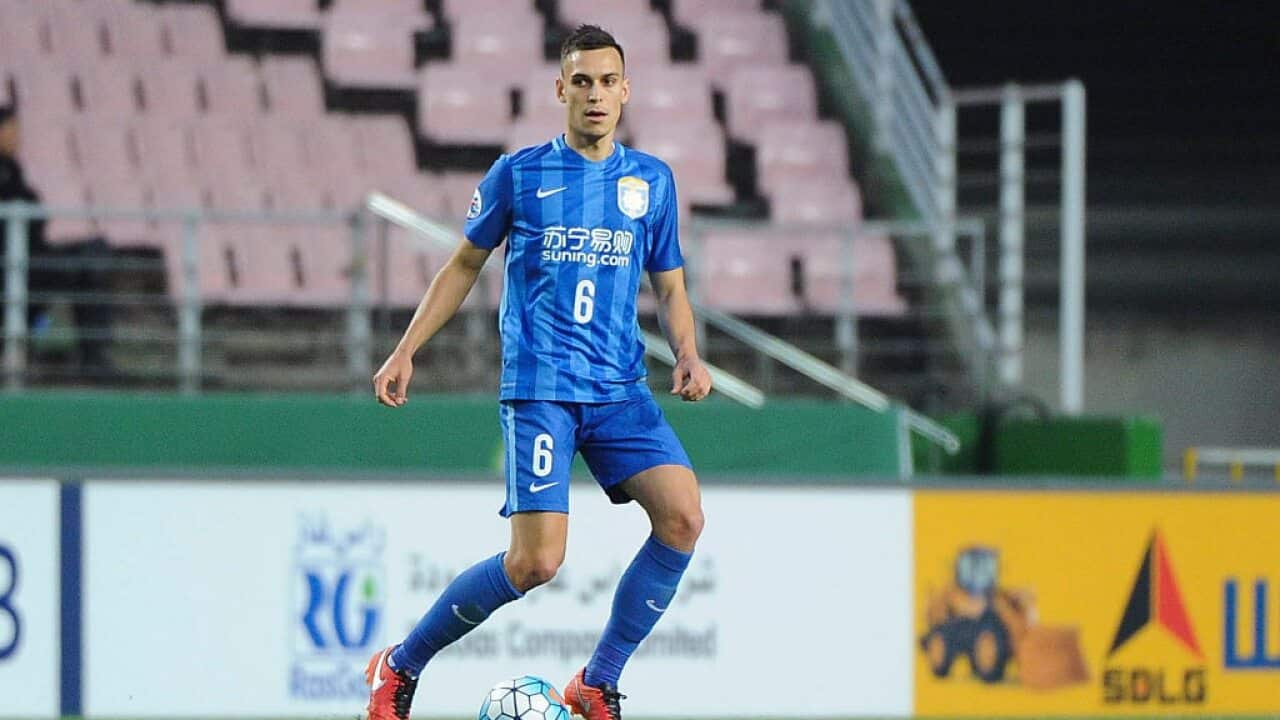 But after a season in the Middle Kingdom the 24-year-old defender insists he wouldn’t have had it any other way.

“There’s a lot of negativity that came with me moving to China from Holland," said Sainsbury, who is currently in camp with the Socceroos in Bangkok ahead of their crucial World Cup qualifier against Thailand on Tuesday.

"But at the same time I wouldn’t change it for the world, I’ve enjoyed it immensely and until this roller coaster ride is over I’m going to keep enjoying it.”

Advertisement
The former Central Coast star insists that playing in China against the likes of Jackson Martinez and Hulk, and alongside Alex Teixeira and Ramires at Jiangsu, has made him a better player.

“It’s been a good experience for me, a good eye-opener,” he said.

“It’s helped me progress as a leader on the pitch because that’s what they look for in a defensive foreigner, they want you to lead the team from the back.”

Sainsbury said his Socceroos team-mates had been asking him and the other China-based players in the squad questions about life in China .

“I think some of the boys are getting recognition and getting a few sniffs from China and they want to know what it's like over there, and we try to give them as much an honest truth as possible,” he said.

“They all want to know how it’s going because it’s quite taboo to some people to be in such a foreign, crazy land I guess.”

One player well versed in living in a foreign, crazy land is Michael Thwaite, who before making the move to China to play with his current club Liaoning Whowin had also experienced life in Romania and Poland when he was younger.

“I’ve lived five years in Europe where I played in Romania, Poland and Norway where you have those big cultural differences,” he said.

“So I kind of knew what that was about at a young age. I had that in mind because I guess it’s different, that experience of a different culture, a new language.”

Like Sainsbury, Thwaite couldn’t speak highly enough of his first season in China.

“It was unbelievable,” he said. “When I first went over I really just wanted to play half a season and maybe even score a goal, and I ended up playing 25 games and scoring three goals, so on the field it couldn’t have gone better."

Thwaite also explained that as one of the five foreign players in the squad there was extra pressure to perform, and credits fellow Australians James Troisi and Dario Vidosic for helping him get through the year, the first year he has spent away from his wife and two children.
“Being one of those five players in the team comes with a lot of pressure as well and if you’re not performing, they want to bring new players in,” the 33-year-old said.

“I was lucky enough to have both James and Dario. I’d say without them there I wouldn’t have got through the year that’s for sure, especially living away from family.

“They became my family and we can talk to each other about the problems, and the good times and bad times and share our experiences to get through that year.”

Both Sainsbury and Thwaite agreed that there was still improvement needed if the Chinese Super League is to close to gap on Europe’s top club competitions.

“I think intensity wise it’s not up to the standards of Europe,” Sainsbury admitted.

“Some of the football we play can be quite attractive at times, but then you come up against lesser teams that just park the bus for ninety minutes and it can be difficult to get the match intensity that I need to maintain international level.”

For Thwaite the improvement was needed off-field in the sports science area, which having completed a degree in sports science, is a particular passion for the former Melbourne Victory, Gold Coast United and Perth Glory star.

“Everything that we’ve got set up in Australia, that can be improved (in China),” he said.
READ MORE
There's no security in China, says smash hit Sainsbury
“It’s a passion of mine, they see you doing that and you teach them about nutrition and the things we get day-to-day in Australia, they probably haven’t done that before. They are getting there, it’s just going to take time.”

Sainsbury still has the Chinese FA Cup final against league champions Guangzhou Evergrande to look forward to at the end of the month, but said the season in China was a success for Jiangsu in their first season under Suning’s ownership.

“At the start of the season they outlined to us what the expectations were,” he explained.

“They said they’d like us to qualify for the Champions League and anything after that is a bonus.

The target next season, however, is clearly much higher and with Brazilian Jo already shipped off there is room for more big name signings in January.

“It was basically a complete overhaul of last season’s players (with) all new foreigners coming in,” he explained.

“So everyone will be better for the experience of it. We all expect it ourselves, not only the owners, but the players they expect themselves to go further and do better in terms of the ACL, the Cup and the league as well.”

While both players are contracted for next season, that can often mean little in the volatile Chinese Super League marketplace.

“I signed (for) two years, the only thing I’ve got weight up is the family situation,” Thwaite said.

“It was very tough on me initially, because that was one of the main reasons I didn’t choose to go to Asia earlier. It was the first time I’ve lived away from my children, which was very hard.”