Socceroos coach Bert van Marwijk may have provided the strongest hint yet of his World Cup intentions, if the composition of his team for the final pre-Russia hit-out against Hungary on Sunday (AEST) is anything to go by. 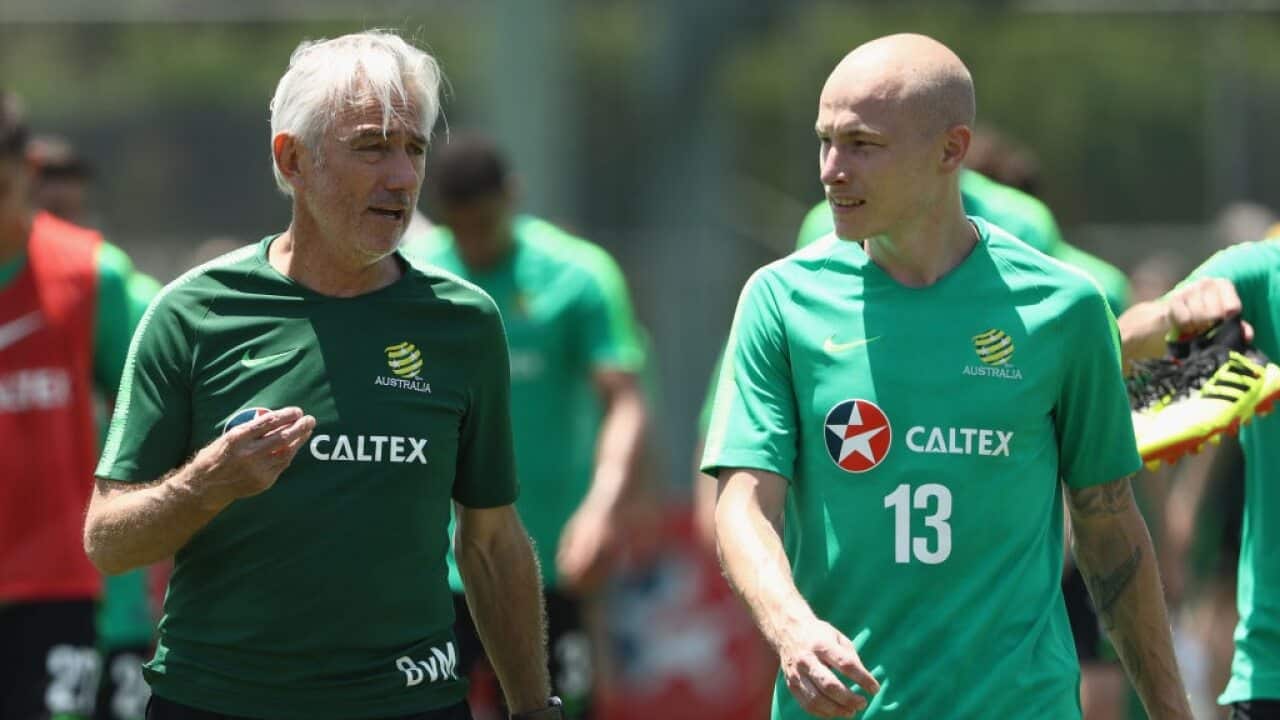 Indications are that the Dutchman will stay loyal to the starting XI which laid the foundations for last week’s 4-0 thumping of the Czech Republic, meaning skipper Mile Jedinak may have to be content with a place on the bench, awaiting his introduction after the break along with the likes of Jackson Irvine and Tomi Juric.

If that’s indeed the case then it will be a reward for a composed all-round team display in Vienna, and more importantly a possible sneak peek at the side which will be named against France in Kazan in Australia’s opening Group C match next Saturday.

Advertisement
Van Marwijk has insisted all along he has neither the time, nor the inclination, to embark on a series of experiments so close to the big kick-off at Russia 2018.

One experiment he has permitted himself though is transforming Andrew Nabbout - the rags to riches tale of the team - into his nominal number nine.

And after his superbly drilled maiden goal for his country against the Czechs, his pace and power looks likely to get the nod over fit-again Juric’s more statuesque presence up top.

Staying true to his word, it appears van Marwijk is now purely focused on building continuity and confidence before the team’s arrival in Kazan on Sunday.

He was impressed by his back four of Josh Risdon, Trent Sainsbury, Mark Milligan and Aziz Behich against the Czechs, with incumbent goalkeeper Mat Ryan also as secure as ever.

All five have been justifiably retained.

The influential Aaron Mooy, who dictated the pace and tempo against the Czechs will again partner the reliable Massimo Luongo in the midfield engine room, with Tom Rogic deployed once again in a more advanced position.

Rogic wasn’t at his most enterprising against the Czechs but van Marwijk will be looking for him to slip into a higher gear in Budapest.

The threats from out wide will again come from Mathew Leckie, whose two goals in Vienna underlined his importance to the team, and the often under-rated Robbie Kruse.

The rise of Nabbout has been the most remarkable aspect of van Marwijk’s tenure - which will be four games old tonight - with Juric’s inability to train for over a week in Turkey providing the coach the chance to test the winger in a central role.

And it seems that journey will continue tonight against a Hungary side, who while not at the World Cup, should provide stiffer opposition than the Czechs.