The countdown is well and truly on to the biggest single sporting event in the world - the 21st FIFA World Cup, which kicks off in 49 days on June 14. 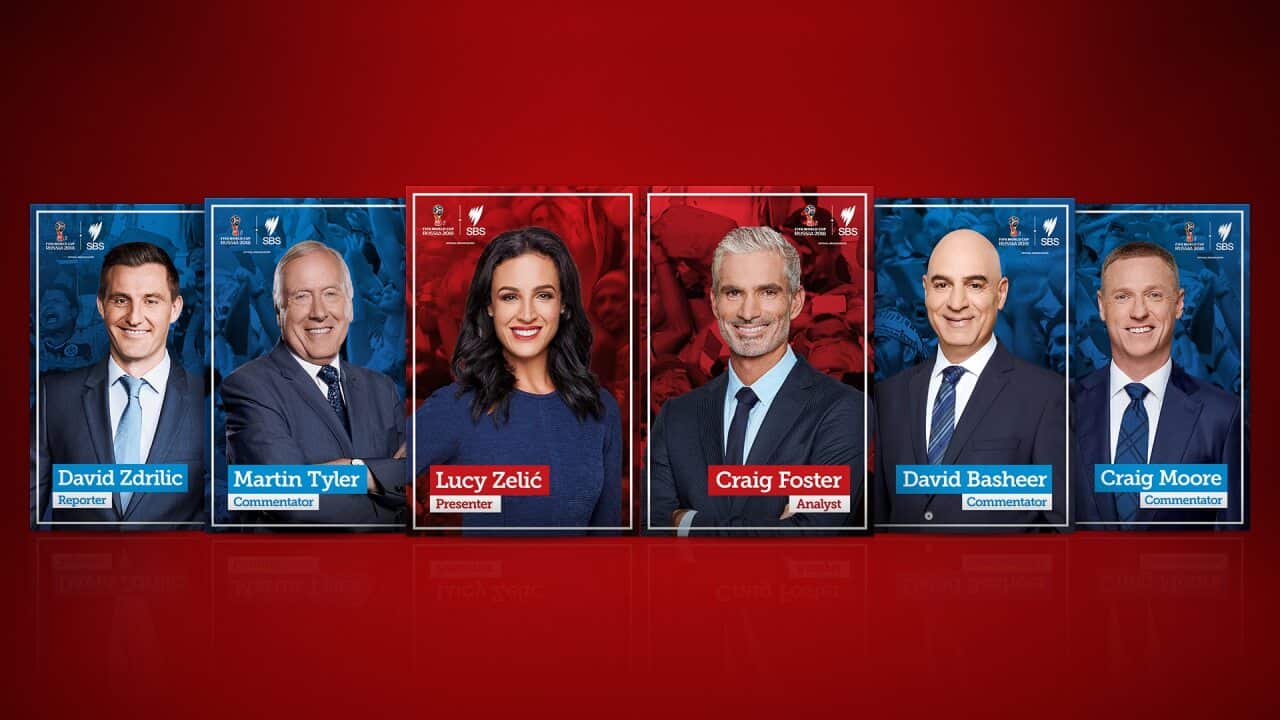 As football fans prepare to see superstars of the game Messi, Ronaldo, Neymar and Salah play for their countries - Argentina, Portugal, Brazil and Egypt respectively - SBS is also proud to reveal the spectacular creative campaign, 'We All Speak Football', alongside the expert broadcast team.

SBS's coverage of the tournament will feature in-depth analysis of every country by former Socceroos captain Foster, who will co-host the match of the day coverage alongside Zelic from the studio in Red Square, LIVE, FREE and in HD on SBS, the 2018 FIFA World Cup app and online via The World Game website.

Advertisement
The pair will also host a daily live highlights show that will cover all 64 games and feature special guests, hailing from all over the world, to share a range of perspectives on each day's events.

Pitch-side tournament coverage and the best access on the ground will come from David Zdrilic, returning to Australian television especially for this year's competition, and a number of SBS reporters will round out the roving reporting team in Russia.

SBS Director of Sport, Ken Shipp, said: "We're extremely proud of our football heritage at SBS and we are pleased to again be offering Australians the most experienced group of football broadcasting professionals presenting the comprehensive trusted analysis we are known for, live from Russia.

"It's SBS's first World Cup without our beloved Les Murray, a.k.a. Mr Football, and we're committed to doing Les and the broader football community who will miss him proud.

"The campaign, 'We All Speak Football', taps into the unifying nature of the sport that bonds the world's diverse communities, and the fact that the World Cup is the absolute representation of this spirit."

SBS will broadcast the match of the day - every day - LIVE, FREE and in HD, including all Socceroos matches, semi-finals and finals, totalling 25 matches across the month.

SBS's coverage will begin with a blockbuster weekend of television featuring the opening match, Russia v Saudi Arabia on June 14, and Australia taking on France at the family-friendly time of 8pm on Saturday 16 June AEST.

SBS Radio will bring Australians all 64 matches live from the World Cup in English and in the languages of the teams competing.

Audiences will experience the passion of commentary in their language for free via the 2018 FIFA World Cup app, SBS Radio app and nationwide on SBS 1, SBS 2, SBS 3, SBS Arabic24, on digital TV and online.

SBS is presenting the 2018 FIFA World Cup in partnership with Optus Sport. Visit
www.theworldgame.sbs.com.au
for further details on how to watch every match.