Primož Roglič (Jumbo-Visma) was the overwhelming favourite heading into the final stage of Paris-Nice but ended up sinking to 15th in the general classification after crashing twice on the shortened 92.7-kilometre stage from Le Plan-du-Var to Levens. Max Schachmann (BORA-hansgrohe) took over the lead thanks to his team's hard work on the front of the peloton. 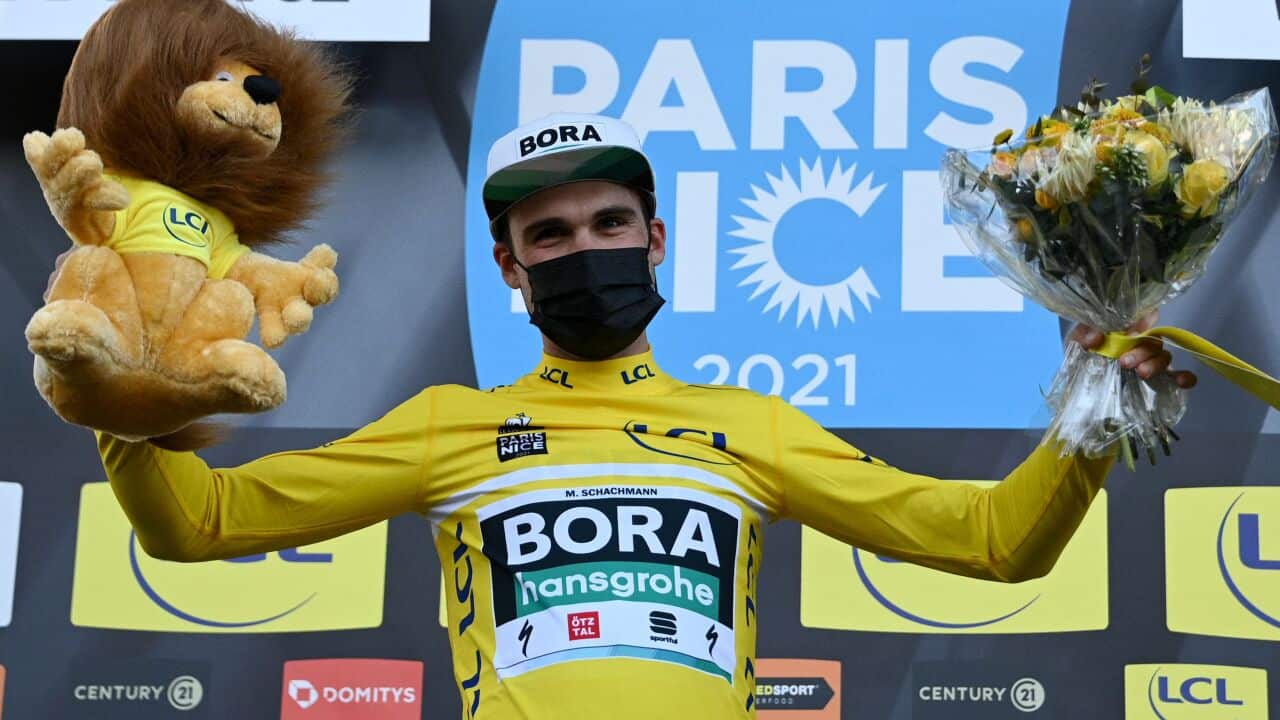 Roglič crashed early in the stage on the descent, falling hard on his left side and later revealing that he dislocated his shoulder with most of the race still left to run.

He returned to the peloton, but later when the pace was on, a crash on the same descent and a subsequent split in the peloton saw Roglič struggling to return as his teammates dropped off one by one as they sacrificed themselves to aid the Slovenian star's return to the main bunch. However, with a fast pace being set by Astana-Premier Tech and BORA-hansgrohe, Roglič was unable to get back on.

BORA-hansgrohe were trying to propel Maximilian Schachmann into the race lead, while Astana-Premier Tech were hoping to get two riders onto the final podium, with Aleksandr Vlasov and Ion Izagirre sitting third and fourth heading into the stage.

Roglič continued to battle all the way to the line, but he finished over three minutes behind stage-winner Magnus Cort Nielsen (EF Education-Nippo), slipping to 15th overall as Schachmann took on the race lead.

Roglič went to Schachmann after the finish to congratulate his rival on defending his 2020 Paris-Nice title, before speaking to journalists assembled at the finish.

"How to say it? It's not the stage we were hoping for," Roglič said. "I did some mistakes today. With the first one I dislocated the left shoulder and then one more time…" he trailed off when talking about the second crash.

"I just gave it all but unfortunately couldn't catch the first guys anymore. It's a little pity but we'll go on to the next [races]."

The two-time Vuelta a Espana winner explained what was going through his head as the race rode away from him.

"I was just thinking how to put everything out of your body," said Roglič. "That's the main thing. It's always a fight and I think if you can fight this fight inside yourself, you did what you could.

"I was really going over myself, and in the end, it was how it was, so there's not much to add. Of course, we are disappointed but like I said the world will not stop and we will go forward."

Schachmann was the main beneficiary from the frenetic racing, jumping from second to first overall to complete a title defence that few saw coming at the start of the stage. The German defended the team's actions in riding to drive the race away from Roglič, what some pundits saw as a breach of the unwritten rules in cycling around respecting a race leader who has had bad fortune during an event.

"The chaos actually started with me,' said Schachmann. "I punctured after seven kilometres and I thought almost it was already lost because no one waited. It was full gas and I had to come back. Thanks to my team, I made it back.

"Then suddenly Primož crashed in front of me. We all waited. The next time he crashed again but it was difficult, the race was on, there was a really strong break, and we had to go. We wanted to fight for the stage win."


Schachmann's reaction to Roglič's congratulation was apparently apologetic, at least on TV footage, raising his hand in a contrite gesture after receiving a congratulatory fist bump.

"It's mixed feelings but in the end I've won and it feels great to win the jersey again," said Schachmann. "It was the goal to defend it and suddenly I'm here, last day in the yellow jersey. It's a different scenario to last year, I don't know what to say."