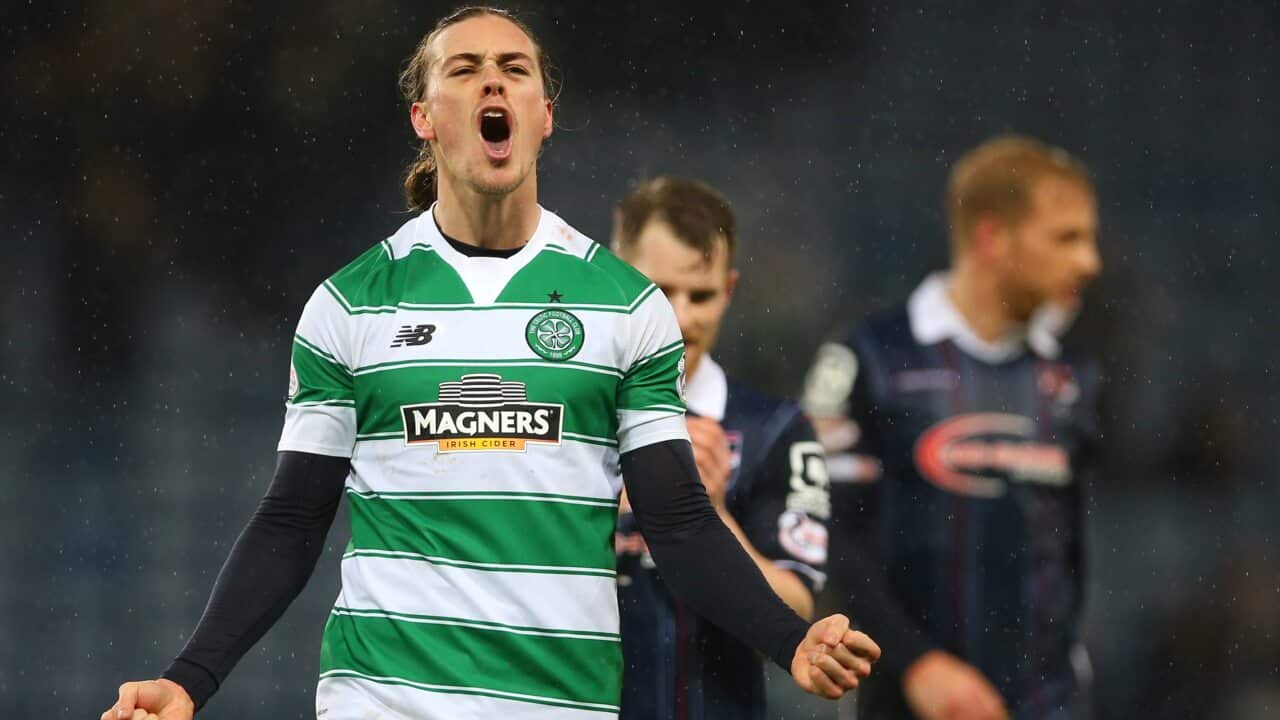 They are a tiny club with tall aspirations and Irvine signed for them last year after a successful loan spell.

Melbourne-raised Irvine, 22, didn't make a senior appearance in four years at Parkhead, but he’s making up for it at the club that lies fourth in the Scottish Premiership, is in the final of the League Cup and the last eight of the Scottish Cup.

Advertisement
Irvine, with 30 appearances in all competitions this season, has been front and centre of Ross County’s rise.

While Rogic, with 22 appearances for the table-topping Hoops, hoovers up the headlines, Irvine is the quiet achiever from the team from the remote Highlands.

“This time last year we were fighting for our lives at the bottom of the league, so to be fourth in the league, fighting for a European spot, in one cup final and alive in another cup competition is quite unbelievable," he said.

“We've worked unbelievably hard to get to this point, and every week we keep getting better. I'm not sure where we will finish but it’s been a huge turnaround.”

Irvine, with two Socceroos caps, has played a part in every game this season, while also juggling his international commitments with the the Olyroos.

And he was at his busy best in helping the Staggies shock Celtic 3-1 to reach the League Cup final two weeks back.

Rogic missed that match with an ankle injury, but Irvine has powered on since and must be in serious consideration for a call up for March's FIFA World Cup qualifiers against Tajikistan and Jordan in Adelaide and Sydney respectively.

“You can’t target your club career around the national team but it’s the reward you get when you have club success," he said.

“Hopefully, it’s getting to the point where you can say I am doing everything I can to be in with a chance of making the squad.

“There are so many good midfielders in the national team. Mile Jedinak is back in favour with Crystal Palace, Aaron Mooy is arguably the best player in the A-League and Tom (Rogic) is having a really good year.

“It’s a really strong part of the team and to get a call up will be really tough.

“But I am still only 22, and the fact I am saying that maybe I have done enough to earn spot is a reflection on how well things have been going with my club. There will be plenty of time in the future to establish myself in the national team.

“Hopefully this season is a kick-start for me. International football is a great platform, and when you are in good form, that’s when you want to be part of it.”

Irvine was predominantly a defensive midfielder in his time at Celtic, and even played as a centre-back on occasion, but he has flourished in a more advanced role at Ross County, picking up three goals so far this season.

He, like all Australians, is delighted to see Rogic thriving.

“Everybody has seen what he is capable of. When he first came to Celtic, there was never any doubting his ability," Irvine said.

"It was always his injury problems that held him back. Celtic fans, as I know, can be very fickle.

"Sometimes people who don’t live in Europe don’t quite grasp the size of that club.

“There’s a lot of pressure playing in a team where you are expected to win just about every game convincingly.

“When we beat them the other week to put them out of the cup their fans were calling for the manager's head because he now can't win the treble. That’s the way it is there and the expectations they have.

“Tom has really lived up to what is expected there - the fans love him and he has just gone on leaps and bounds. I couldn’t be happier for him after a tough couple of years with injuries.”

Irvine was last month denied permission to join the Olyroos' failed bid to qualify for the Rio Olympics.

He was disappointed not to have been allowed to travel to Doha, but sympathised with Ross County's position.

“The boys were devastated not to make it to Brazil. I wish I could have been there but I fully understand why they wouldn’t release me," he said.

“If I had been on the outer rim of the team, maybe they would have released me but since I have played so much they wanted me here, and respect that decision.

"I expressed to the club that I wanted to go. In a way it was compliment to me that they didn't release me and showed that I am integral part of the team."