Socceroos Greats - Where are they now: Terry Greedy

The World Game's monthly feature pays tribute to yesteryear's heroes who left their mark on football down under. Goalkeeper Terry Greedy shares the highs and lows of a club and country career that was nearly lost until the NSW Premier came to his rescue. 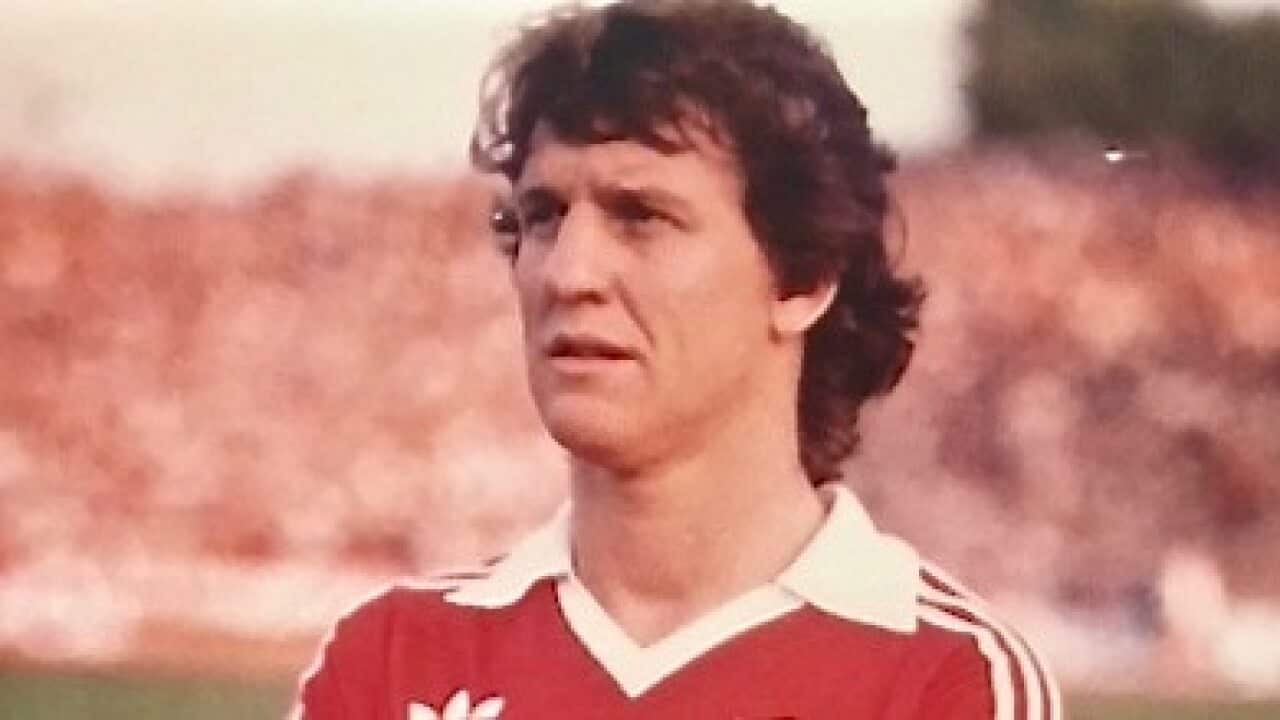 Goalkeeper Terry Greedy was named in the Socceroos Team of the Eighties Source: Supplied

Socceroos goalkeeper Terry Greedy revealed he owed his club and international career - that took him to within one match from the 1986 FIFA World Cup - to a chance conversation with NSW Premier Neville Wran in the early eighties.

Greedy is regarded as one of Australia’s best goalkeepers of his generation and he was named in the Socceroos Team of the Decade for the 1980s even though he served the national team for only 16 full internationals over three years.

He made his Socceroos debut against England in 1983 but Greedy's international career nearly ended soon after it started until Mr Wran came into the picture at a function in Sydney later that year.

"The problem was I was travelling from Ingleburn to school every day and after that I had training and at that time we had two young kids. It was difficult on family life and I was missing out on seeing them grow up," Greedy explained.

"I mentioned these difficulties to Mr Wran, who was a soccer tragic, at a civic reception in Sydney.

"Mr Wran said he wanted me to remain available for selection and I think he might have had a hand in helping me out.

"I was fortunate enough to get a transfer to Gymea North in the Sutherland shire in 1984 and when the St George club set me up in a house at Brighton-Le-Sands, everything became much easier for me. That was the reason I continued to play."

Greedy, who is now 62, was happy to talk about his short but eventful career.

"I've been retired for the last two, three years and before that I was a school principal at Woy Woy South. I live in Toowoon Bay on the Central Coast and at the moment I am desperately trying to get my golf handicap down."

How come you started your professional career so late at the age of 27?

"I actually went to teachers’ college up in Lismore and it wasn’t until I completed the course there in 1978 that I could come to Sydney for a soccer trial.

"I needed to get the course behind me so up to that point soccer was not an option for me. I then played State League for four years before I signed up with St George in the NSL."

Where did you learn your goalkeeping skills?

“I did not have any coaches until I came to Sydney. I had a couple of mates take shots at me for a couple of hours after school at an oval next door to where I lived in Lismore. That’s where I sort of developed my skills. I thought myself really."

How did you end up at St George in the NSL?

"I was fortunate to be playing for Melita Eagles in the State League and doing well. Our coach Atti Abonyi was a former St George player and knew their coach Frank Arok well. Abonyi brought me to Arok’s attention and he offered me a contract.

"I spent most of my first season on the bench but I got picked for the semi-final, which surprised me. But I was man of the match and got selected for the grand final against Sydney City. We won and I got the man of the match again. That set me up for a good second season in which we won the championship."

Arok was a huge influence on your career. Tell us a bit about him?

"Frank was an exceptional man. He had the ability to get inside a player’s head. His biggest strength was his man management. He was able to speak on an individual basis with his players and get the best out of them.

"I still remember the first Socceroos camp I went into. He told us that we were not the best players in Australia but together as a group we would complement each other and be a strong national team.”

You played for Australia in the qualifiers for the 1986 World Cup. What are your recollections?

"We won the Oceania section and then had to face Scotland in the final qualifier. They had some exceptional players like Kenny Dalglish, Graeme Souness and Gordon Strachan. I remember stepping onto Hampden Park in the first leg and it was two degrees. There were about 80,000 people and as soon as we walked on to the pitch they started singing 'sheep shagging bastards'. It was a quite daunting occasion.

"But we did well although we lost 2-0. It’s just a shame that we conceded the first goal from a free kick early in the second half that had a little story behind it. We talked about having a wall in such a way that the person on my side of the wall would step off when the kick was taken but in the heat of the moment, Joe Watson said he forgot all about it and I could not see the ball until it went past me and was nestling in the back of the net.

"We had a few scoring chances in the return in Melbourne but we could only draw 0-0. Their goalkeeper Jim Leighton was man of the match which gives you an indication of how the game went."

The Socceroos always knew they would have to beat a European team to get to Mexico. Were you guys genuinely confident?

"We were always confident of getting through the Oceania section even though Israel proved to be as hard to beat as ever. But when we found out that we would have to play Scotland it was mind-boggling to realise we were about to face the same stars we had watched so many times on television.

"Basically we had nothing to lose when we played the Scots who were red-hot favourites. And history will show that we acquitted ourselves rather well."

Who were your main rivals for the Socceroos jersey?

"I took over from Martyn Crook for a three-match series against England in 1983 but Jeff Olver, Tony Franken, Kim Wishart and Tony Pezzano were my main rivals. I was very fortunate to hold my spot with such excellent goalkeepers around."

Was there a match for club or country in which you felt at the top of your game, perhaps unbeatable?

"My first games for Australia were the ones against England, who had such stars as Peter Shilton and Trevor Francis playing for them. I ended up being named man of the series.

"I was offered a couple of trials by Bobby Robson (Ipswich Town) and his assistant Ron Greenwood (West Ham United) but I had a young family then and had just started teaching so I did not take up the option. In hindsight I now regret not giving it a go."

Was your selection in the team of the 1980s the highlight of your career?

"Yes. It was very nice to be seen as Australia’s top goalkeeper of the 1980s during which I faced some great players."

Which was your biggest disappointment?

"It came in the days leading up to the tie with Scotland in 1985. We were told we would receive no remuneration from our soccer federation because they said they had no money. At a players’ meeting we agreed we were entitled to a share of the television rights and other income from the two matches and we seriously considered not turning up for the two matches. But when it came to the crunch only four of us were serious about not playing.

"In the end I agreed to play against Scotland but I told them I would retire from international football after the play-off. Which I did as a matter of principle. The dispute cost me my Socceroos career."

What did you think of the Socceroos' win over Honduras?

"I enjoyed the game which was tense as expected. I thought the Aussies played extremely well in the first half, soaking up the pressure from Honduras. In the second half they took control with a more settled game, using the glut of possession more effectively.

"Aaron Mooy again was outstanding. I still think Tom Rogic needs to work better with those around him. Trent Sainsbury for me was the man of the match while Mile Jedinak was a tower of strength in the middle.

"We need to find a quality striker. It was a poor effort from Mat Ryan for the Hondurans' goal. He needs to dominate his area not only on the ground but also in the air to take pressure off the defence on set pieces. Too much of our play was focussed down the left side. I would have liked to see more from Mathew Leckie down the right but overall it was a good team performance.

Do you feel that goalkeepers nowadays are given more protection from referees?

"For sure. I still remember the first senior game I played. A cross came over and I was charged by two men and ended up in the net and I had to be helped out.

"That was my introduction to the State League and I always had that incident in mind whenever I came out for a high ball and I had to protect myself. In this day and age, if a keeper is touched referees award a free kick."

Who are the best players you played with and against?

"Fellow Socceroo Alan Davidson was without doubt the best player I played with. He was an exceptional fullback. Striker John Kosmina was another great player.

Finally, who are the players you admire most in Australia and abroad?

"Mooy is one of the most successful Australian players to come through. I saw him play as a 12-year-old and could see he had a big future. He is demonstrating it now for Huddersfield in the best league in the world.

"I am impressed with the goalkeeping skill of Peter Schmeichel’s son Kasper, but in terms of the highest quality I would have to say Lionel Messi, who must be at the top of everyone’s list."