Australia may have found an unlikely ally in the fight for a spot in the 2018 FIFA World Cup after star defender Trent Sainsbury was entrusted with an added responsibility at his new club in China. 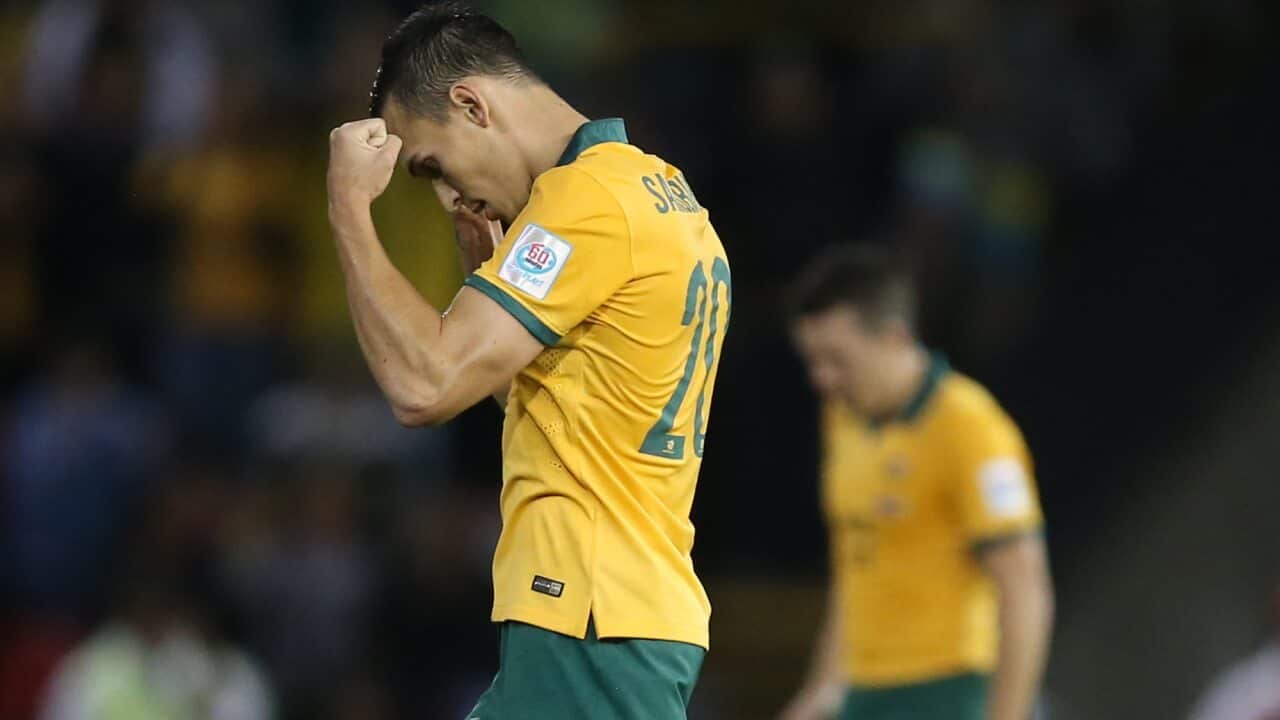 Could Trent Sainsbury be the next Socceroos captain? Source: Getty Images

Petrescu, who knows a good defender when he sees one, is a big fan of Sainsbury's qualities and he not only has rewarded the Socceroos stalwart with four starts in the club's four competitive matches so far this season but also made him the leader of the line.

Advertisement
While star Brazilian imports Alex Teixeira, Jo and Ramires are expected to run the show in an attacking sense, Petrescu wants Sainsbury to be the guiding light to his younger and less experienced defenders.

READ MORE
Sainsbury reveals why he left Europe for China

This will be music to Socceroos coach Ange Postecoglou, who would welcome another leader in the team with open arms especially when the national team negotiates the final phase of qualifying for the World Cup in Russia.

Who knows? We might be dealing with a future Socceroos captain here.

"I've had to be on my toes for 90 minutes and lead the defence in every game," Sainsbury said, as he prepared for the weekend league game against Yanbian.

"We have four Brazilians in charge of the attack and I'm the foreigner in charge of defence so it's all extra pressure on me.

"I've done more screaming in four games here than I did in two years in Holland.

"This should help my game, definitely. I'm at the heart of the defence and can see everything in front of me so my communication has to be on point.

"Players are counting on me to be their eyes in the back of their heads. That works for both club and country. I like the role of leadership on a pitch, it's something I have to work on.

"Having said that, from my short life experience I know that it's not what you preach that counts but what you produce.

"I'd like to think that my performances warrant a selection in the Socceroos team and I just hope that just because I've come to China I won't be overlooked."

Sainsbury has fitted in nicely at Jiangsu, who play in the city of Nanjing, and is finding out that going to China with an open mind is paying dividends.

"To be honest everyone said it was going to be a culture shock for me so before I'd even arrived I was already mentally prepared," he said.

"The country is decent. My partner and I have found some nice places to eat and figuring out all the little bits and bobs to buy to make life more comfortable and the advice I got from some Aussies I spoke to has made it easier."

Sainsbury is full of praise for the facilities at Jiangsu, which is hellbent on challenging Guangzhou Evergrande for the honours.

"The stadium is very new and modern and the training facilities are not bad either. We'e got fenced-in fields," he explained.

"The gym is of a good standard but for me the biggest thing is that they have a good medical staff. They have brought in experienced Croatian physio Zoran Rajcic.

"He's a very good physio who understands a player's body and the mentality of European players and what we have been used to in the past. Plus he puts strong pressure when doing massage work which i enjoy ... if it ain't hurting it ain't working.

"The people at the club helped with basically everything. I have not had to stress myself too much about organising anything which is always a plus."

Sainsbury is delighted to have played every minute of Jiangsu's matches this season: two AFC Champions League games that yielded a win and a draw, the one-off Chinese Super Cup that Jiangsu lost 2-0 to Guangzhou and the first Super League match of the season against Shandong Luneng that Jiangsu won 3-0.

"It was difficult in our first two games because we literally had the starting 11 together for only one session before our first ACL game in Vietnam," he said.

"Then we travelled to Chongqing for the Super Cup game but once we got back to Nanjing we finally started to click and get our structures sorted out.

"We play counter-attacking football and are hard to break down. Once we have the ball though we can control games because we have good footballers as well.

"Everything went to plan on opening day which was a delight for everyone," he said.

"Now we just need to keep building on this momentum."

Sainsbury is expected be be picked in Postecoglou's squad for the Word Cup qualifiers against Tajikistan in Adelaide on 24 March and Jordan in Sydney five days later.