This year marks 20 years since Australia last played in Tehran and the Socceroos' return to the Middle Eastern city has revived painful memories of the infamous 1998 World Cup qualifiers against Iran. 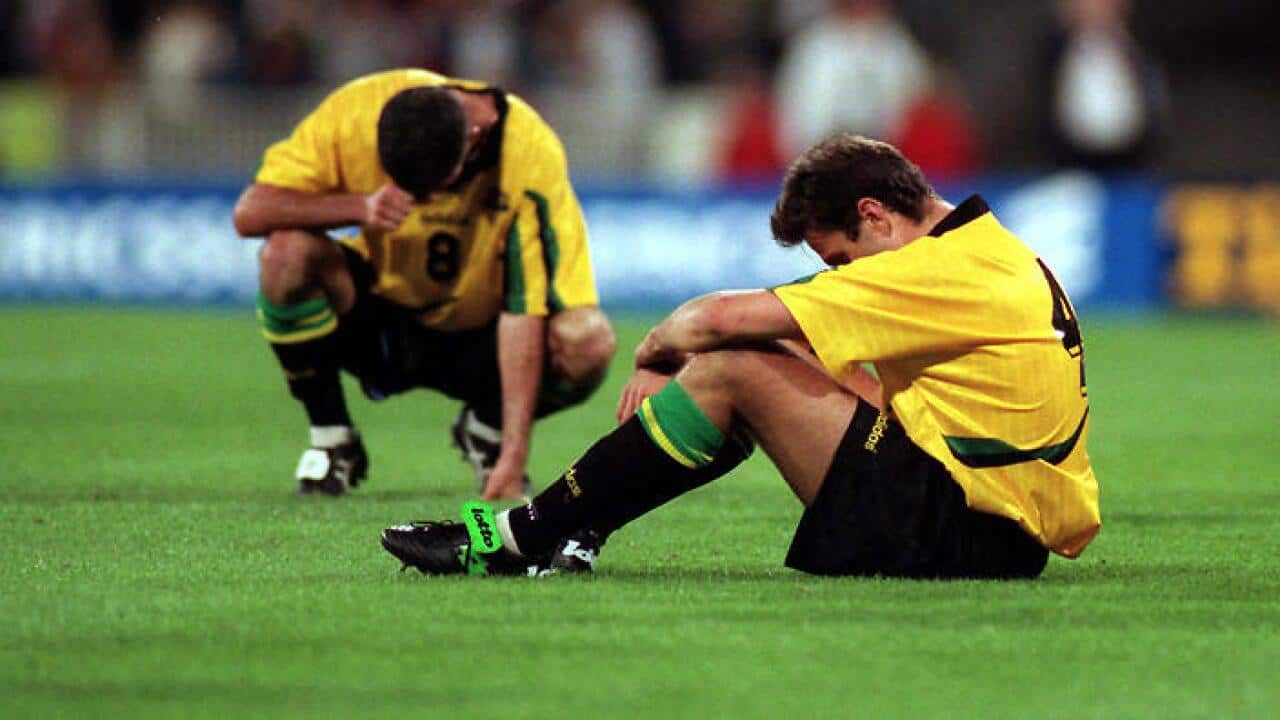 Twenty years ago Iran was all that stood between Australia clinching the final spot at the 98 World Cup and ending the Socceroos' 24-year drought on football's biggest stage.

With Terry Venables at the helm, a star-studded Australian side traveled to Iran with the hopes of a nation on their shoulders and returned buoyant before experiencing the most heartbreaking match in Australian football history.

The Socceroos are back in Tehran for the first time since then to face a different opponent in Iraq, and under different circumstances.

Advertisement
But for Alex Tobin, who wore the captain's armband in those fateful matches in 1997, and Mark Bosnich, who was in goals, it has brought all the painful memories flooding back.

Tobin led the side as they faced Iran over two legs, the first taking place in front of a mammoth crowd of 128,000 crammed into the Azadi Stadium, 18,000 more than the ground’s capacity.

“We went out for the pre-match to have a look at the pitch and plenty of us we’re saying ‘that’s why we play, for this moment’," Tobin recalled.

"It wasn’t a sort of daunting or scary crowd or anything like that. Obviously they were as passionate as anybody but really it was just a matter of professional players loving those occasions.”

Australia took the lead in the 19th minute after a 19-year old Harry Kewell beat the offside trap to score his first international goal and send the Azadi Stadium into silence.

“I think with the exception of two people who were Australian supporters, the entire 128,000 were generally Iranians, so there wasn’t much noise going on,” Tobin said.

But the Iranians struck back in the 39th minute, Khodadad Azizi lunging in at the near post to put the ball past Bosnich. At 1-1 the ground erupted.

“It was like a roar that you’d never heard in your life,” Bosnich recalls.

“It was obviously the biggest crowd I’d ever played in front of."

The score remained 1-1, with both teams having chances in the second half to win the game. Bosnich was called on several times to keep Iran at bay.

“The majority of the saves were the ones you’d expect a goalkeeper to save,” he says. “Probably in the end the draw was a fair result.”

Then it was on to Melbourne for the return leg and that fateful night at the MCG.

As every Australian football fan painfully knows, the Socceroos were cruising that evening on November 29 thanks to goals from Kewell and Aurelio Vidmar.

When Vidmar made it 2-0 in the 48th minute spectator Peter Hore ran onto the field and damaged the Iranian goal net, causing a long delay in play.

Iran took advantage to regain their composure with late goals from Karim Bagheri and then Azizi knocking the Socceroos out in the cruelest of fashions.

Debate has raged since that night 20 years ago about the cause of the collapse – the actions of Hore, the use of the offside trap or overlooking Milan Ivanovic for a starting spot.

According to Bosnich, the Socceroos simply “threw it away”.

“A lot of people argue that we created enough but we just weren’t good enough to take advantage of the chances that we created,” the 45-year old says.

“Two-nil, 20 minutes to go and to be fair to the Iranians, they were warriors. They refused to give in. Away from home many teams would have given up – they didn’t."

Bosnich describes it as "easily the biggest disappointment in my career".

But he believes the agony of that qualification campaign may have been necessary for the magical moment eight year later, when the Socceroos qualified for the 2006 World Cup with a penalty shootout victory in Sydney over Uruguay.

“It’s always special playing for your country, it was just a disappointment that we couldn’t produce for the Australian people," he said.

"I just felt sorry for the people because they had waited so long to be in the World Cup.

"Maybe that was the pain we had to go through, to make sure what happened in 2005 happened.”

But with every World Cup Australia qualify for and with the hope they will eventually become genuine contenders on the biggest stage of all, it is being slowly alleviated.

“Football can be a cruel game and that was the ultimate example of it,” the 51-year-old said.

“That one was the most crushing because of what it stood for. It was the most heartbreaking simply because how well we did play and how we dominated the game.

"For that to turn around how it did, it hurt even more. But that’s football, that’s why we love the game. There’s highs and lows.

“It’ll always hurt. I’ve never watched the game and I’m sure I never will. It hurts as much as it can.

"The highlight of any professional footballer is to play in the World Cup, to play for your national team and I’m no different. It hurts.

"The best medicine for something that’s not going to ever be completely cured is the Socceroos performing and making World Cups and performing better at World Cups.”

Remarkably, Australia and Iran have not met in a senior international fixture since those 1997 matches.

Much has changed since then, with the Socceroos back in the Middle Eastern nation as they bid to reach their fourth consecutive World Cup.

As they prepare to take on Iraq at Tehran's Shahid Dastgerdi Stadium on Thursday night, Australia sit third in their qualifying group behind Japan and leaders Saudi Arabia.

They then face the UAE in Sydney five days later, with three of their five remaining qualifiers to be played at home.

Tobin has been encouraged by the Socceroos’ development and rise since the 1997 disaster and feels this coming week will be defining for the national side.

"We’ve got a number of home games that we’d expect to win. It could be better, but we’re still in a very, very strong position," he said.

"Hopefully on Thursday the process will continue and they can get a good result there. Then there's the game in Sydney after that.