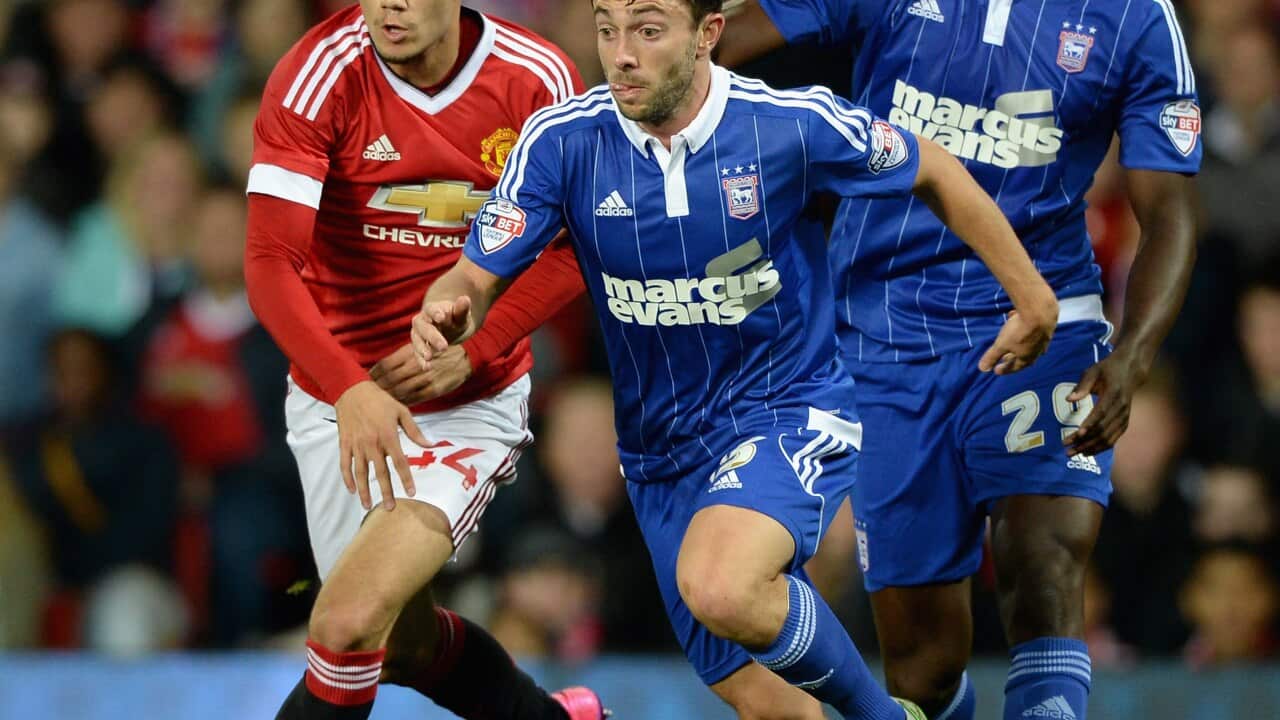 Tommy Oar was on the scoresheet for Ipswich Town. (Getty) Source: Getty Images

Conor Chaplin looked to have won it for the impressive visitors after giving Portsmouth a 2-1 lead with four minutes left.

Advertisement
But Ryan Fraser's deep free-kick missed everyone and ended up floating into the far corner to give Ipswich a draw, and a replay.

Town, under-par and second best for most of the match, actually took the lead in the 53rd minute through Socceroos attacker Oar, but could only keep it for little over 90 seconds after Kyle Bennett grabbed a well-executed equaliser.

Both by nature of Ipswich's late equaliser and their own dominant performance, Portsmouth will feel hard done by.

They started brightly, and they should have opened the scoring on 17 minutes.

Ben Davies' cut back was perfect for the unmarked Adam McGurk but his first-time shot went horribly over.

Gary Roberts then headed over after the visitors once again found space in the Ipswich penalty area before - shortly after the half-hour mark, and after an assured period of possession from Portsmouth, McNulty found space behind the home defence only for his low shot to be pushed away but Bartosz Bialkowski.

Portsmouth were dominating, both possession and chances, and the impressive Bennett brought a good save from Bialkowski with a low shot from the edge of the area.

It had been a poor first half for the Championship side but it all changed seven minutes after the restart.

His first-time shot was saved by the legs of Murphy but the ball fell to Oar who calmly netted the rebound despite the attentions of men on the line.

But within minutes, Pompey were deservedly level when Roberts and McNulty combined to tee up Bennett who calmly found the far corner.

Portsmouth almost took the lead after Bennett played in the onrushing McNulty but his low shot was well saved by Bialkowski at his near post before the same two players again went toe-to-toe, the Town keeper doing well to hold a powerful effort from the Portsmouth number 10.

After coming on just before the hour mark, Fraser began to make a difference and his shot was smartly turned around by Brian Murphy after a neat interchange with Pitman.

Just as Ipswich looked dangerous, they were hit by a sucker-punch when Chaplin worked himself a yard and brilliantly found the bottom corner with a low drive.

But within two minutes, the home side were level when Fraser's free-kick from out wide ended up in the far corner after Luke Chambers had challenged Murphy.