Barely five kilometres from the Fisht Stadium in Sochi lies the border with Abkhazia, a contested territory claimed by Georgia. Despite 25 years of de facto independence, Abkhazia’s football-obsessed people remain excluded from the outside world – and the FIFA World Cup. 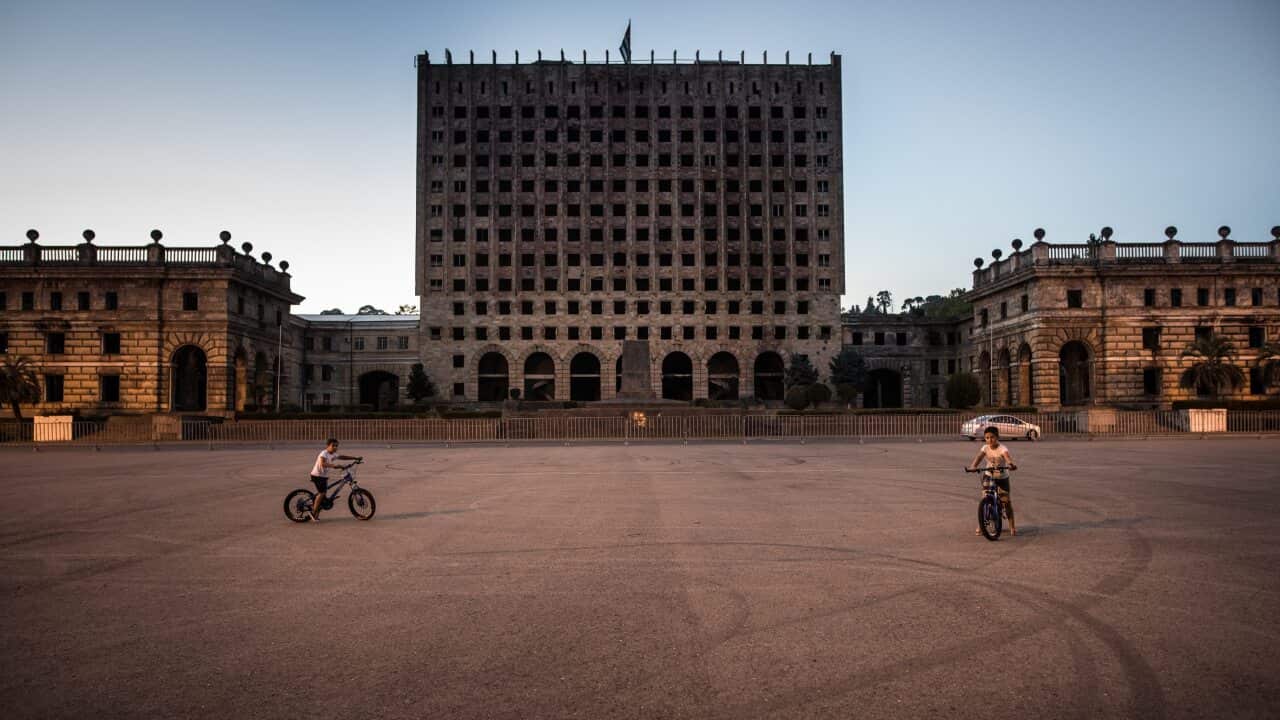 Dynamo Stadium in Sukhum/i, capital of Abkhazia, is no ordinary fan zone.

Despite being less than two hours from Sochi, which hosts the quarter-final between hosts Russia and Croatia on Sunday (4am AEST), Sukhum/i feels a world away from the glitz and glamour of the World Cup.

Abkhazia broke away from Georgia 25 years ago in a bloody secessionist conflict.

Advertisement
Although it gained de facto independence – Abkhazia has its own flag, government and number plates – it remains isolated from the international community.

The picturesque Black Sea territory was recognised as a state by Russia and several other nations a decade ago.

But this only hardened the resolve of Georgia and its allies, the European Union and United States, who maintain Abkhazia is part of Georgia.

At the locally-organised “fan zone”, a projector and a large screen on the pitch of Dynamo Stadium, such political concerns seem distant.

“I do not want to talk about politics, only sport,” says Astamur Adleyba, the owner and chairman of Dynamo Sukhum/i – who play at the stadium.

Adleyba’s club is a successor to one of the most successful clubs in Georgia’s top league during the Soviet era.

Adleyba, the former mayor of Sukhum/i, has poured his personal funds into the team as it looks to return to former glories.

But one avenue for that success – international football – is closed to him.

Abkhazia’s ambiguous political status means that its attempts to join FIFA and UEFA have been rebuffed, barring Dynamo from playing sanctioned matches against other clubs in the region.

“Why can’t our team play in international tournaments? How is the political situation our fault? We are asking simple questions and UEFA do not answer.”

This exclusion also keeps the Abkhazian national team out of FIFA-sanctioned international football.

“Football is very important to Abkhazians,” explains Nikita, a 17-year-old attacking midfielder for Dynamo, via a translator.

“It is very sad that Abkhazia is not part of the World Cup,” he complains.

Instead, Abkhazia has joined an organisation for football federations outside of FIFA, and even hosted a non-FIFA international tournament in 2016.

The home team won in front of a record crowd and that event is still fondly remembered in Sukhum/i; following Abkhazia’s win, President Raul Khajimba declared a public holiday over the stadium tannoy.

“It is not the best thing to make politics out of sports, but unfortunately that is something that takes place nowadays,” Khajimba tells The World Game in his stately office.

While Khajimba expresses hope that FIFA might change its mind, until then – he says – Abkhazia may have to keep hosting its own tournaments.

Despite its exclusion, Abkhazia is hoping to use the 2018 FIFA World Cup to improve its image among foreigners.

In collaboration with Russia, the Abkhazian Ministry of Foreign Affairs has established a visa-free regime that permits visitors with FAN IDs to cross the border.

“It is fantastic to see foreigners in our homeland,” says Daria, a local.

She has heard reports of visitors from Germany, Portugal, Argentina, Denmark, Sweden, the United Kingdom and the United States.

The World Game met four Peruvians at the border who had been sunning themselves on Abkhazian beaches following Peru’s victory over Australia.

“It felt like being at home,” says Ellie, who comes from a mountainous region of Peru. “It was very beautiful and calm.”

The region was a tourism hotspot during the Soviet era and remains a popular destination for Russians – over a million visit annually – but the conflict and subsequent isolation has meant that non-Russian visitors are now a rarity.

One reason for the lack of visitors is the travel advice of Western governments.

Australia’s Department of Foreign Affairs and Trade advises “against all travel here due to the very high risk.”

In sunny, seaside Sukhum/i, these risks are not immediately apparent.

Chirikba, who spent his time in office hopping around the world trying to convince countries to establish diplomatic relations with Abkhazia, is blunt about his broader ambitions.

“We would like to be recognised by the international community and become a member of the United Nations,” he declares.

But Chirikba, who is not a football fan, concedes that many fellow Abkhazians have another, equally-distant goal.

“It is the dream of our people to one day be able to play in the World Cup,” he says.