Rookie Australian goalkeeper Tom Glover believes his buoyant Tottenham Hotspur teammates have the “belief and ability” to march all the way to Premier League title glory this season. 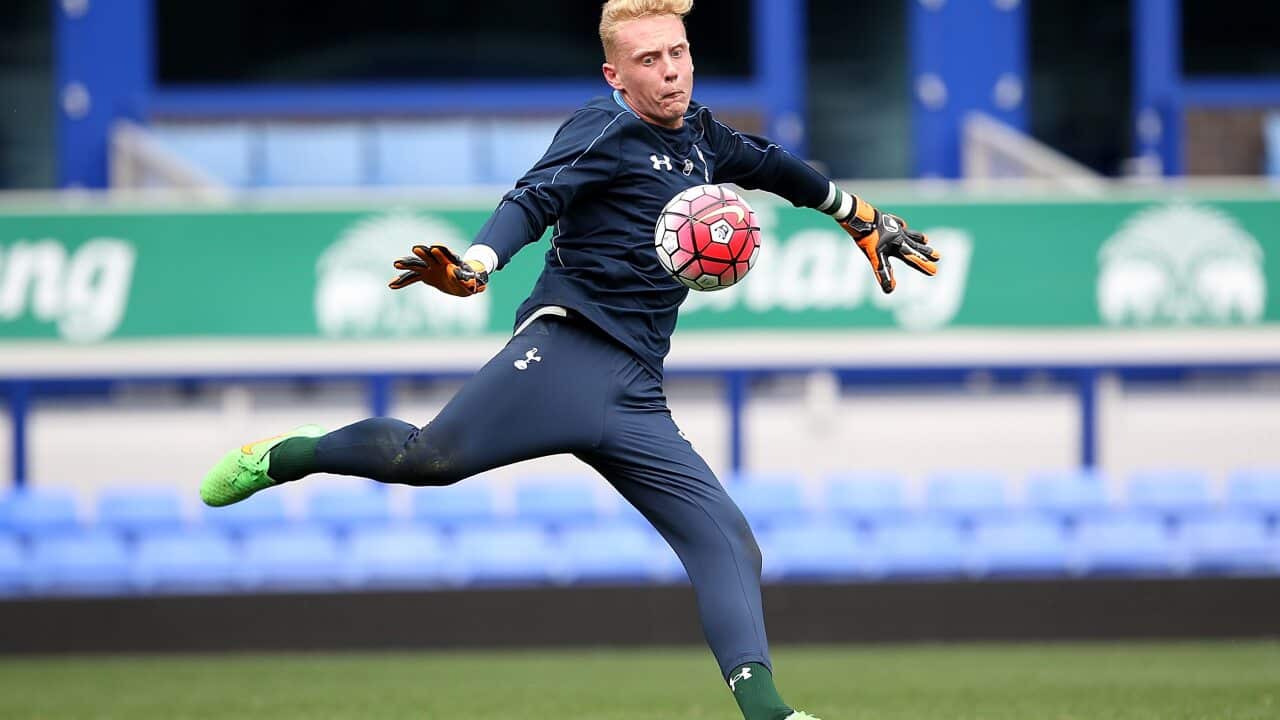 The Young Socceroos shot-stopper, 18, trains and travels with Spurs’ first team squad and is being groomed as a star of the future.
Advertisement
Glover said the club’s current batch of luminaries, led by the fearsome foursome of Harry Kane, Christian Eriksen, Eric Dier and Dele Alli, will not falter in the title run-in - they sit only two points behind leaders Leicester City with 12 matches to go.
“I don't see why we can’t go the whole way - we have the belief and the ability in the squad to do that,” Glover said.
“We are doing so well - we’re on a run and the coaching staff are excellent also. Mauricio Pochettino is unbelievable. We have such a young squad and for him to be getting so much out of them is incredible.
“There’s an aura in the dressing room which you can see, and also on the training ground - the team is taking that into matches at the moment.”
The UEFA Europa League and FA Cup are still on the Spurs agenda too, but Glover doesn't see them as being a hindrance, rather, they are a chance for further success.
“I don’t see that as bad thing because we have so much depth in the squad," he said.
“I think we can handle being in these competitions, and I don’t see any reason why can’t go for all three and hopefully be successful."
The kid from Sutherland in Sydney’s south, who has made 14 appearances for Spurs’ under-21s this season, has emerged as the club’s current third choice keeper behind captain Hugo Lloris and his Dutch deputy Michel Vorm.
Glover will travel with the first team to Italy for Friday’s (AEDT) UEFA Europa League round of 32 clash against Fiorentina and he credits working with Tottenham's two senior goalkeeper as key to his development.
Glover said Tottenham's goalkeeping coach Toni Jimenez is also key to his rapid rise.
“I am training with two of the top keepers in the world (Lloris and Vorm) and for me the best keeper’s coach in the world,” he said.
“He’s sees the game different to anybody, which I find amazing. We take things from games into training during the week.”

“I am doing well and I am improving all the time. When I’m not playing I keep a close eye on Lloris and Vorm - I try and sponge all I can from them really.
“Even on games days. I am not just there to do the warm ups; I look at what they do, how they act, what they eat. It’s all about trying to make myself a better keeper.
“It’s also amazing training with so many great players. They are also good people and they have been supporting me and advising me along the way.
“A the start of the season I had goals to get games with the under-21s (as well as the under-18s) and to now be training with the first team is a huge step up.
“To be honest, I have surprised myself little bit.”
Glover, who signed a contract extension until 2018 two months ago, is in his third season at White Hart Lane and while he doubts whether this will be a breakthrough season as far as first team appearances are concerned, he knows the experience he is gleaning will be invaluable.
There is also the post-season trip to Melbourne for the International Champions Cup in July to look forward Melbourne in July, which Spurs will head-line with Italian giants Juventus.
“I have only recently turned 18 and this is my first season with the top squad and I have to take it step by step, be realistic and concentrate on developing myself as a player and as a person,” he said.
“I expect to see this season out with the Under-21s and who knows what will happen next year?"
Follow @lewieatlarge