Super-sub Santa takes one for the team at the Wanderers

Brendon Santalab, the star of the late, late show for Western Sydney Wanderers, is not agitating to start more games as a result of his prolific goalscoring form of late. 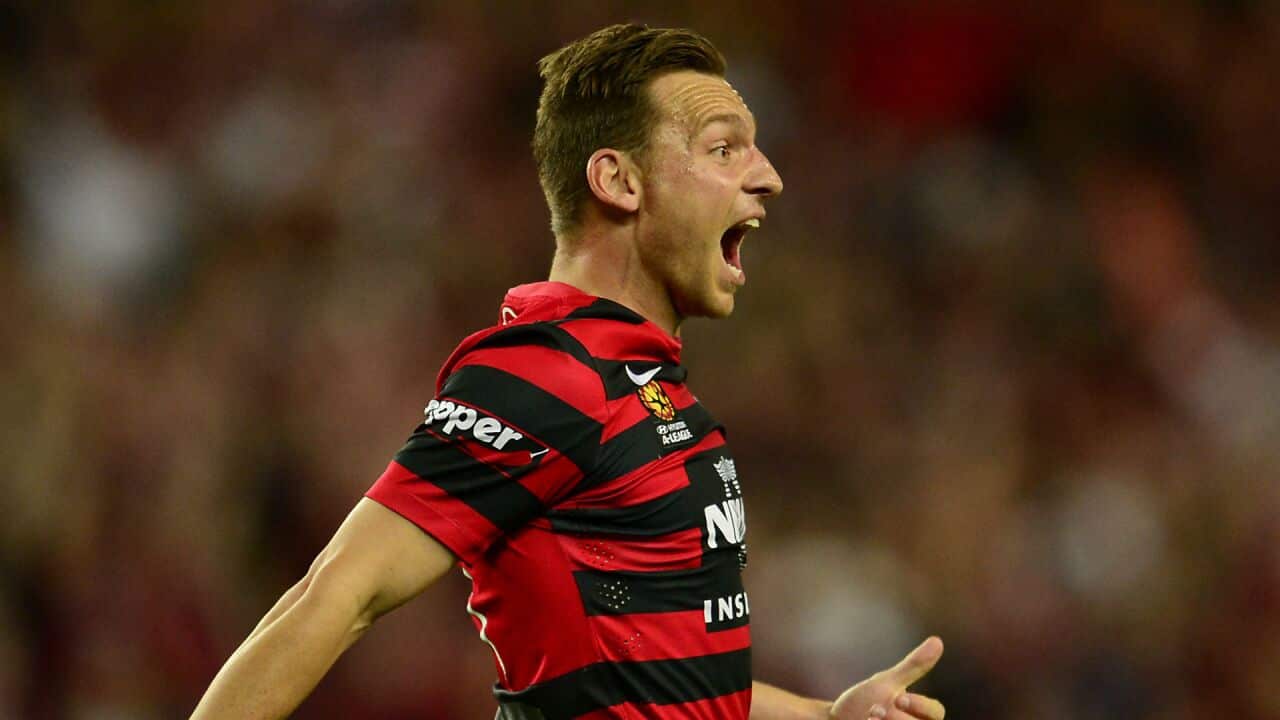 READ MORE
Santalab insists 'Ninja' goal was above board

Advertisement
Santalab has taken the "if it ain't broke, don't fix it" approach to his situation and said that if Wanderers coach Tony Popovic thought it was best to hold him back for a late flurry he was fine with that.

The 33-year-old striker has played 15 games this season and come off the bench in 14 of those. He has adjusted sensationally to the role of 'super-sub' scoring a series of crucial goals in big matches.

He also scored a critical goal in the 89th minute of the round-17 game against Melbourne City. That effort game Wanderers breathing space again, with a 4-2 lead, after they had led 3-0 and City had fought back. City scored an even later goal to make the final score 4-3 to Wanderers.

All up, "Santa" has scored six goals this season. The other two came in the 66th minute of a 2-0 win over Central Coast in round eight and the 20th minute of a 2-2 draw with Perth in round 11. That game against Glory was the only one Santalab has started in this season.

Italian marquee striker Federico Piovaccari can't get a game for Wanderers after Popovic discarded him for his lack of goals, but rather than put Santalab up front at the start of games he has used the normally wide-left player Mark Bridge at the top of the attack.

Bridge has answered the call, coming up with nine goals to be the team's equal-leading scorer this season with attacking midfielder Mitch Nichols.  Popovic is hardly likely to stop using a formula while it is working and Santalab understands and accepts that.

Asked if he would rather be starting, Santalab said: "Yeah, of course, but we have a team that is playing well at the moment, we're top of the league, so why change something that's not broken?

"'Popa' trusts me, he believes in me, he's handed me a new two-year contract and I trust my coach through and through with whatever he decides to do with me.

It was still 0-0 when Santalab went to the sideline to wait to come on just after the 60-minute mark of the game against Glory. But before he actually got on the field, Wanderers had scored, and then before he had been on for one minute Perth were awarded a penalty from which they scored.

So the scenario had rapidly changed back to what it was when he first lined up to come on. But, whatever the circumstances, Santalab never seems fazed.

"It was a good test of character for us when we conceded straight away after scoring our goal and we had to come back from that," he said. "I thought when we scored for 2-1 we pressed them really hard for a good five-minute period after that and closed the game out quite well."

The 33 year-old said that when he comes on he tries to take advantage of his own freshness by running the opposition central defenders around.

"The good thing for me is that when I go on they're a little bit fatigued," he said. "Perth had two big central defenders in (Shane) Lowry and (Alex) Grant on the field and going on with 30 minutes to go was probably the perfect solution.

"Watching from the sideline, I felt as though they were getting a bit tired I think Popa may have seen that as well.

"I tried to shift them out of their natural positions and then wait for the moment and I got a fantastic ball from 'Bridgey' and managed to score. What a season he's having - he's been outstanding for us.

"Bridgey is so classy in those situations, so composed. I think he's really shining this season. He's fitter than ever and he's a huge asset to our team and our club."