A-League punters were left in no doubt about Sydney FC's potential for more silverware this season after a gruelling week which underlined the extraordinary athletic capacity of the reigning champions. 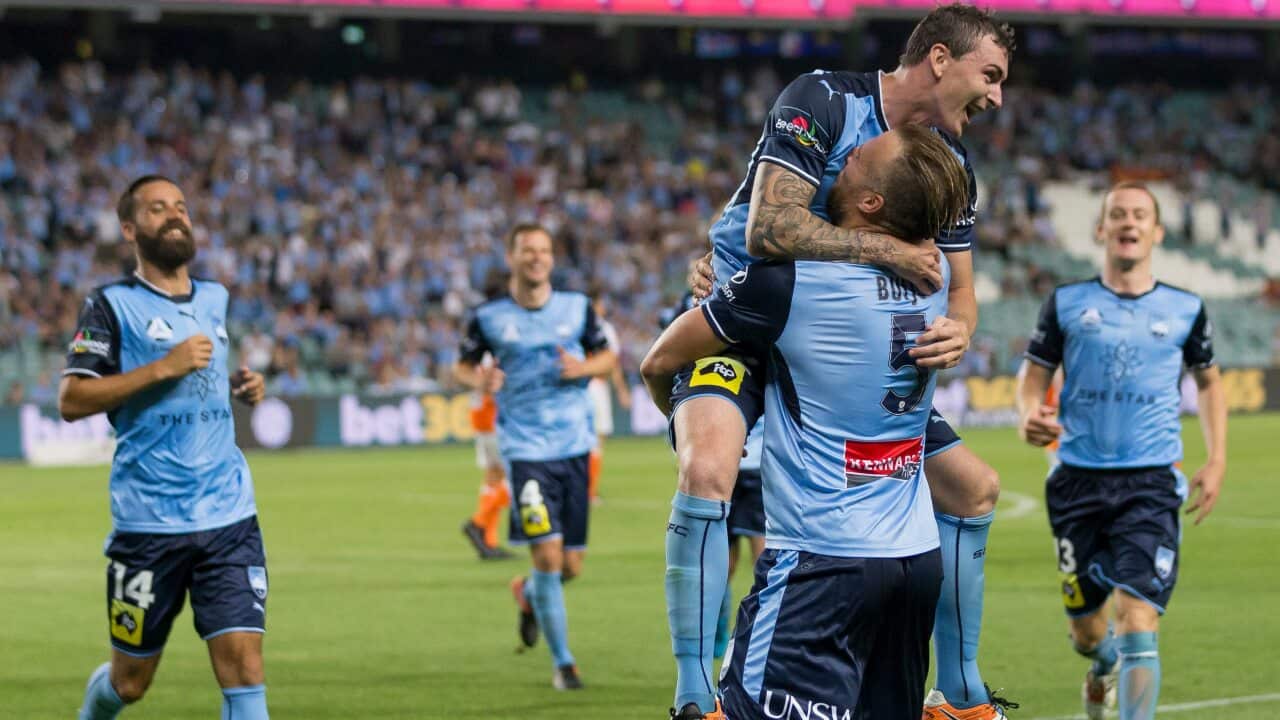 The Sky Blues overcame Brisbane Roar 3-1 to maintain their lead of the competition and finish a big week that spoke volumes of their skill, temperament and staying power.

They completed the trifecta without injured players Michael Zullo and playmaker Milos Ninkovic while striker Bobo was given a rest and made only a cameo appearance in the last few minutes.

It was an impressive all-round performance that was simply too much for an enterprising Brisbane side that produced some promising moves but their attacks nearly always came to nought due to a poor final ball.

Sydney's 'week' started with a 2-1 win over previously undefeated Newcastle Jets that was followed by another 2-1 victory over Adelaide United in the FFA Cup final.

The three tough matches in the space of eight days showed very clearly that Sydney are beginning to get into their stride after a slowish start to the season.

It is now abundantly clear that it would take a hell of a team to stop them from winning the fourth championship in the club's history.

Certainly a first treble in the A-League is on the cards.

Graham Arnold, who is being touted as one of the main contenders for the vacant Socceroos job provided his club let him go, has engineered a complete transformation at Moore Park since he joined the club in May 2014.

Sydney, remember, were barely watchable in the years preceding Arnold's arrival, even allowing for the star presence of Italian marquee Alessandro Del Piero.

The Sky Blues rarely set any houses on fire, particularly in the second of the Italian's two seasons among us.

What a difference three years makes!

The Sky Blues, who won the double last season, are still strong in every department, particularly in their midfield comprising Ninkovic, Adrian Mierzejewski, Brandon O'Neill and Josh Brillante.

The latter has become such an important cog in Sydney's well-oiled machine that describing him as a defensive midfielder would appear to be a touch 'demeaning' because he is much more than that.

His athletic qualities are second to none but he can also play and find the net if given time and space to unload with his potent right foot.

He is the complete midfielder and he will let no coach or team down.

Arnold was magnanimous in his appraisal of his trusted lieutenant after the match.

"Joshy was frightening. He's got so much energy. He ran 17km on Tuesday night and he backed up today after 120 minutes in the final," Arnold said.

"There are not many players in the A-League that do what he does. He tracks, he presses, he's very good on the ball and he sees a pass. He and O'Neill got through a mountain of work tonight."

Brillante's consistent performances for Sydney could give him an opportunity to make a late run for selection in the Socceroos squad for the 2018 FIFA World Cup should the incoming coach stick with two holding midfielders.

Brillante played five times for the Socceroos, mostly in friendly matches in 2014.

When asked if Brillante should be a contender for a Socceroos spot, Arnold chuckled: "They don't have a coach at the moment and I don't know who selects the team."

Brillante had a frustrating time in Italy but Arnold revived his club career by signing him at the start of last season.

Who knows, Arnold might also be in the right place at the right time to provide Brillante with a more meaningful international career.