In the lead up to Australia's do-or-die FIFA World Cup qualifier with Thailand, Ange Postecoglou's system and choice of players have been heavily criticised. We take an in-depth look at how Australia has conceded goals in the last 10 months and what patterns have emerged. 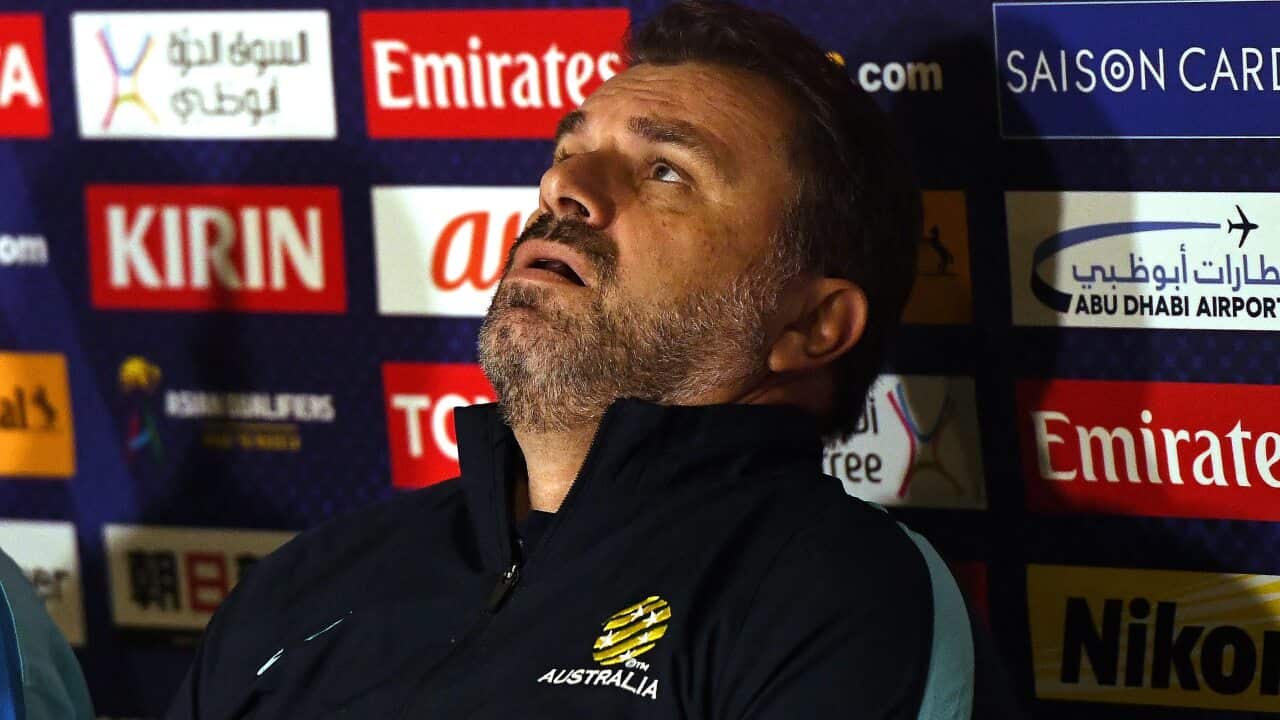 After playing a 4-1-2-3 against Thailand in Novemeber, that resulted in a disappointing 2-2 draw, Postecoglou decided to change his formation to a 3-2-4-1 for the match against Iraq in March, and has more or less played that formation since.

Advertisement
When well executed the 3-2-4-1 allows players to receive the ball and face forward in between the opposition's lines of defence. As explained in this video of the Socceroos' match against the UAE by analyst Tim Palmer:

However one of the key weaknesses that can be exposed is the space in behind the wing-backs who push very high up, which can see the back three stretched, creating gaps in the middle of defence.

Wing-backs getting caught high up the pitch

Degenek has to come quite high and wide to make this aerial challenge because Leckie (pictured just above the Australian flag in this image), the wing-back, is pushing up much higher.

In a traditional back four it would be the responsibility of the right full-back to cover this aerial duel and there would be three players (two centre-backs and a left-back) as cover in behind.

As the Iraqi player receives the flick-on, Milligan (who is playing at the centre of the back three) must close him down, now Jedinak must cover the space vacated by Milligan.

Yasin's goal here shows the weakness of the system and why individual blame should be avoided. Who would you blame here? Leckie for being too high? He was presumably told to be in that position by Postecoglou. Degenek had to cover that space, Milligan had to cover Degenek, Jedinak had to cover Milligan and Iraq exploited the space vacated by each player.

It's a wonderful pass by Saudi midfielder Yehya Al Shehri and a well worked goal, but again there are multiple reasons this goal is allowed to happen.

The high wing-backs, the lack of pressure on Al Shehri's pass, McGowan and Sainsbury losing their men after being forced to turn.

Notice also that Jedinak had to cover Smith who had pushed up high. Had Jedinak been in his more natural central defensive midfield role, could he have blocked Al Shehri's pass? Most likely.

Postecoglou has rotated a number of times at left wing-back with Alex Gersbach, Brad Smith and Aziz Behich all playing there.

Against a very impressive, albeit second string, Germany, Behich was given the nod but had similar issues that Smith has had.

Germany are one of the best teams in the world at exposing opposition systemic weaknesses. Again individual blame should be avoided because there are multiple issues here.

Rogic doesn't quite shut down Kimmich, Luongo doesn't get close enough to Goretzka - potentially because he is attempting to protect the space - Behich gets beaten for pace by Brandt and Wright is caught between covering for Behich, stepping up to Goretzka and doing his primary job as a centre-back.

It's not only wing-backs getting caught high, it's clear that Smith, Leckie, Behich do not play in these positions regularly for their club. In the case of Smith, he doesn't play regularly at all.

According to the highly respected transfermarkt.com -
Leckie has never played as a right-wing back for any club, while he has played on the left wing on 99 occasions
.

This means that they are prone to make positional errors, especially given they have very little time in camp with Postecoglou to learn exactly what is required at all times.

Again it is wrong to solely blame Leckie for this goal as he is covering a dangerous threat in Vidal that possibly should have been picked up Luongo instead. But Leckie did need to cover.

Luongo had stepped across to cover the danger presented by Martin Rodriguez's run and pass. Again are these individual errors or just natural weaknesses of a system?

Both wing-backs had trouble against Japan.

On their first goal, Leckie tracks the run but can do little when Nagatomo cuts inside and crosses. The question of the system comes up again. Could a more natural right-back have shut this cross down.

Then, Brad Smith, who has struggled for regular football, shows his rustiness and fails to track his man.

The position of the wing-backs is one weakness that opposition sides have exposed and scored goals via. The other is tracking by defensive/holding midfielders.

Mooy is undoubtedly one of Australia's best players when the team is in possession - however defensively there have been issues.

Mooy had a similar problem against Germany.

Again this is not Mooy's fault exclusively - just examples of how he can be exposed defensively in this system.

Again this is not Mooy's fault only, nor is it only Leckie's fault who gives away the penalty. And you are of course going to start Mooy and Leckie because of what they give you going forward. But weaknesses exist.

Mooy's not alone in this. Milligan failed to shut down Stindl against Germany for their second goal, which resulted in a Luongo giving a penalty away in similar circumstances to Leckie against Thailand.

Again, there are multiple problems here created by Germany's smart movement. Milligan, Sainsbury and Luongo all get pulled into positions they don't want to be in allowing space to open up in other areas.

There are clearly systemic issues defensively with Australia, which is why the Socceroos have only kept one clean sheet in nine matches across the past 10 months.