Team BikeExchange's Bates expelled from Giro after crashing into Serry

Pieter Serry (Deceuninck-QuickStep) was being dropped from the group of favourites when he was hit from behind by the Team BikeExchange team car, crashing hard to the ground. 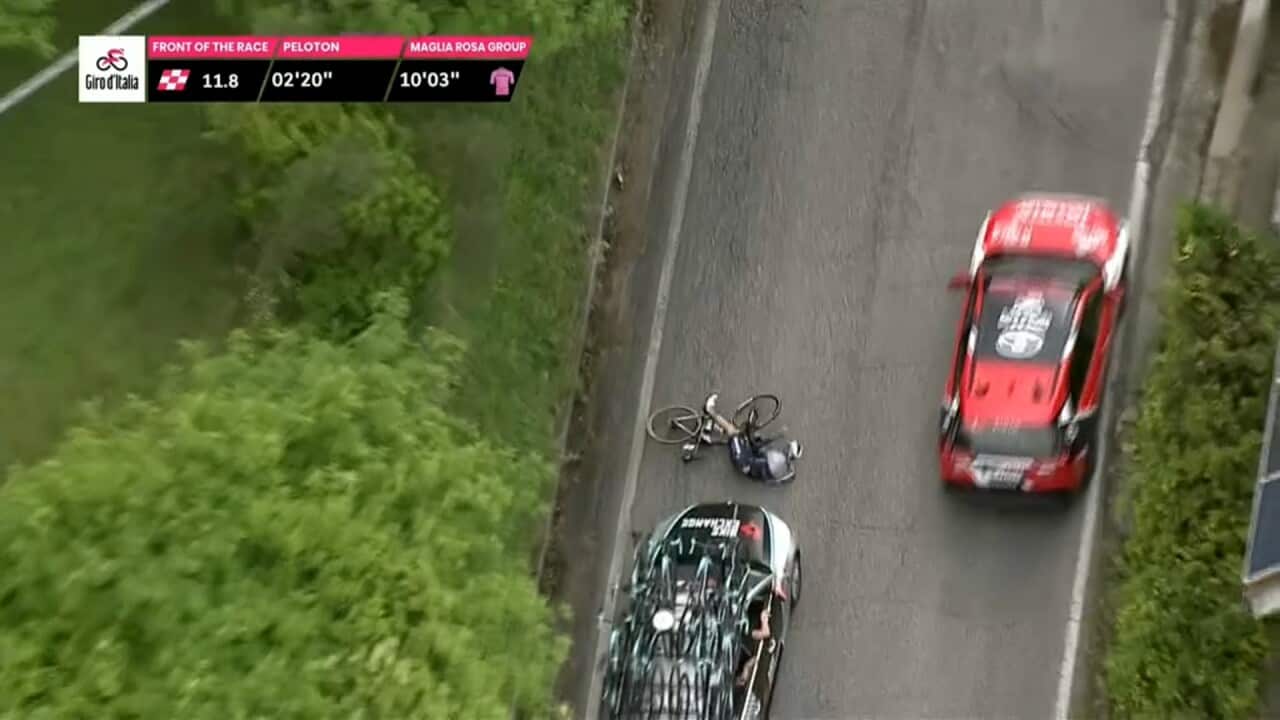 Pieter Serry of Deceuninck-QuickStep was hit from behind by the Team BikeExchange car at the Giro d'Italia. Source: SBS

The incident occurred with 12 kilometres to go in Stage 6 of the Giro d'Italia as the pace ramped up within the peloton. Serry drifted back from the group, and the Team BikeExchange team car ran into the rear wheel of Serry, causing the Belgian rider to crash hard, the bumper of the car hitting him in the back on the way down.

The Australian WorldTour team's car was being driven by experienced sports director Gene Bates and it appeared that something was being exchanged with an official's car from the passenger side of the vehicle at the time of the crash.

Bates was expelled from the race after the stage as a result and passenger Matt White, head sports director for Team BikeExchange, was fined 2000 CHF by race officials. The Australian team later tweeted out that Bates had personally apologised to Serry for the incident, with the rider confirming that later in his own Tweet.

Advertisement
A battered Serry launched an understandable spray of invective towards the car as he recovered to remount his bike. He made it to the finish and spoke briefly to reporters at the finish, highlighting a bad run of luck in recent times as he had been involved with a motorbike collision at the Volta a Catalunya.

“I crashed. The car went into the back of me,” said Serry. “It’s a really sad feeling because one month ago in Catalunya I had the same with a motorbike. My back really hurts and I was a bit emotional.”

Outside of social media communication, there has yet to be any official communication from Team BikeExchange about how the regrettable incident occurred.