The World Game looks back on ten moments which shocked the football world. 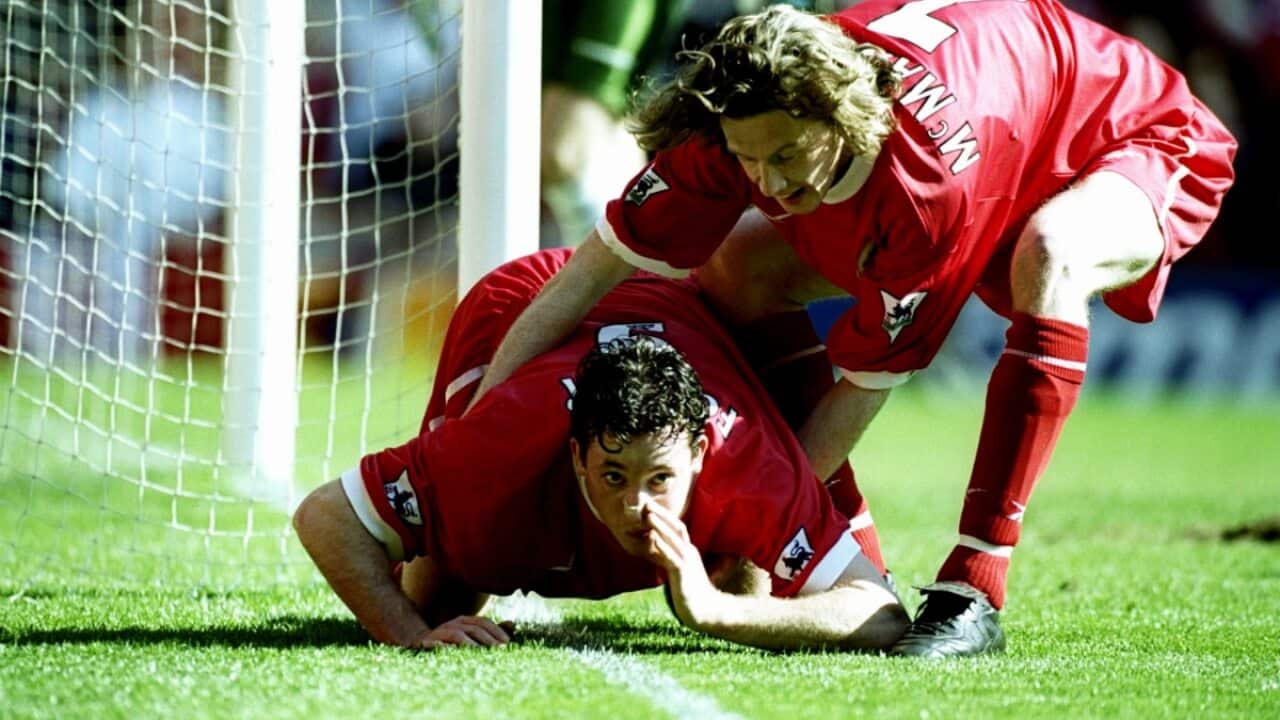 Advertisement
Cantona may have been known as a volatile, as well as brilliant player, but what occurred at Selhurst Park 21 years ago was still extraordinary. The Frenchman was sent off after reacting to a shirt-pull by Crytal Palace's Richard Shaw by kicking out, but the red mist really descended as he walked back to the tunnel. Cantona launched himself into the crowd to kick Palace fan Matthew Simmons, who was shouting abuse at him. He was found guilty of assault and initially sentenced to two weeks in prison, a punishment later changed to community service on appeal. The Football Association banned him for eight months.

Luis Suarez sent shockwaves through football when he bit an opponent for the third time in his career during the 2014 World Cup. The Uruguay striker had already been banned for sinking his teeth into rivals during while representing Ajax and Liverpool when he remarkably did it again on the game's biggest stage. Italy defender Giorgio Chiellini was the victim. Suarez initially tried to claim he was the man wronged - a version of events most of Uruguay seemed to concur with - but FIFA saw it differently and banned him for four months.

Few fouls have earned the notoriety of that by West Germany goalkeeper Harald Schumacher on France's Patrice Battison in the World Cup semi-final in 1982. Battison was clean through as he raced on to a fine ball from Michel Platini but Schumacher charged out of his area and flattened the Frenchman. He suffered cracked ribs, lost two teeth and required oxygen on the pitch. Remarkably he did not even get a free-kick.

Another unsavoury World Cup incident occurred in 2006 when the great Zinedine Zidane, in his last game, lost the plot in spectacular fashion as France were ground down by Italy in the final in Berlin. The score was locked at 1-1 with 10 minutes of extra time remaining when Zidane reacted to the verbal provocation of Marco Materazzi by headbutting the Italian defender in the chest. The incident was unseen at the time by the referee but he was informed of it by the fourth official via headset, and Zidane was dismissed.

Spitting is one of the game's great taboos, something that was never more obvious than after the outrage sparked by Holland's Frank Rijkaard at the 1990 World Cup. In a bad-tempered clash with West Germany, Rijkaard was booked for scything down Rudi Voller. Voller complained he was spat at in the aftermath and was booked for his protestations. The battle between the pair continued and less than a minute later both were sent off. Then, in full view of the cameras, Rijkaard clearly did spit at Voller.

DYER AND BOWYER COME TO BLOWS

Fights occasionally break out on the field but what was remarkable about that involving Kieron Dyer and Lee Bowyer in 2005 was that both were playing for the same team, Newcastle. On what was a dismal day for the Magpies as they were beaten 3-0 by Aston Villa at St James' Park, Dyer and Bowyer came to blows as a row over who was or was not passing to who spectacularly exploded. Both were sent off.

Sheffield Wednesday's temperamental Italian Paolo di Canio lost his cool in dramatic fashion in a game against Arsenal in 1998 when he reacted to being sent off by pushing over referee Paul Alcock. Di Canio was not initially involved as tempers flared following a clash in midfield but he got caught up in trouble as a brawl developed. He did not take kindly to the red card that followed after the situation was calmed and he shoved Alcock in the chest, comically sending him backpedalling and eventually to the ground. Di Canio was banned for 11 matches and fined £10,000.

Alan Pardew has been involved in a few unsavoury moments during his managerial career but the worst, a headbutt on a Hull City player, was the most bizarre. Pardew's Newcastle were winning 3-1 at the KC Stadium in 2014 when he inexplicably got involved in a touchline altercation with Hull's David Meyler. Meyler pushed Pardew as he attempted to retrieve the ball to take a throw-in and was headbutted in response. Pardew was handed a three-game stadium ban and banned from the touchline for a further four games.

Aston Villa's Australian goalkeeper Mark Bosnich was taunted by Tottenham fans on a visit to White Hart Lane in 1996, with the reason for their anger dating back two years to an incident involving Spurs' German striker Jurgen Klinsmann. Bosnich reacted by making a Nazi salute. Given Spurs' strong Jewish connections, it caused outrage. Bosnich pleaded ignorance, insisting he was merely joking and mimicing a scene from Fawlty Towers. He quickly apologised for any offence once the seriousness of his actions became clear.

The latter end of the 1998-99 season was not a period to remember in the largely brilliant Liverpool career of Robbie Fowler. Already under fire after making homophobic gestures towards Chelsea's Graeme Le Saux, Fowler responded to the baiting of Everton fans over unfounded allegations of drug-taking with an ill-advised goal celebration. After scoring a penalty in front of the Everton fans, Fowler ran towards them and then bent down to pretend to snort the byline. He was later banned for six matches, four of which related to the snorting incident.