Thailand game unlike any other I’ve ever played: Cahill

Socceroos striker Tim Cahill admitted it was a surreal feeling to see Australia take a 2-1 victory against Thailand in their final World Cup qualifier – yet not seal direct qualification to Russia 2018. 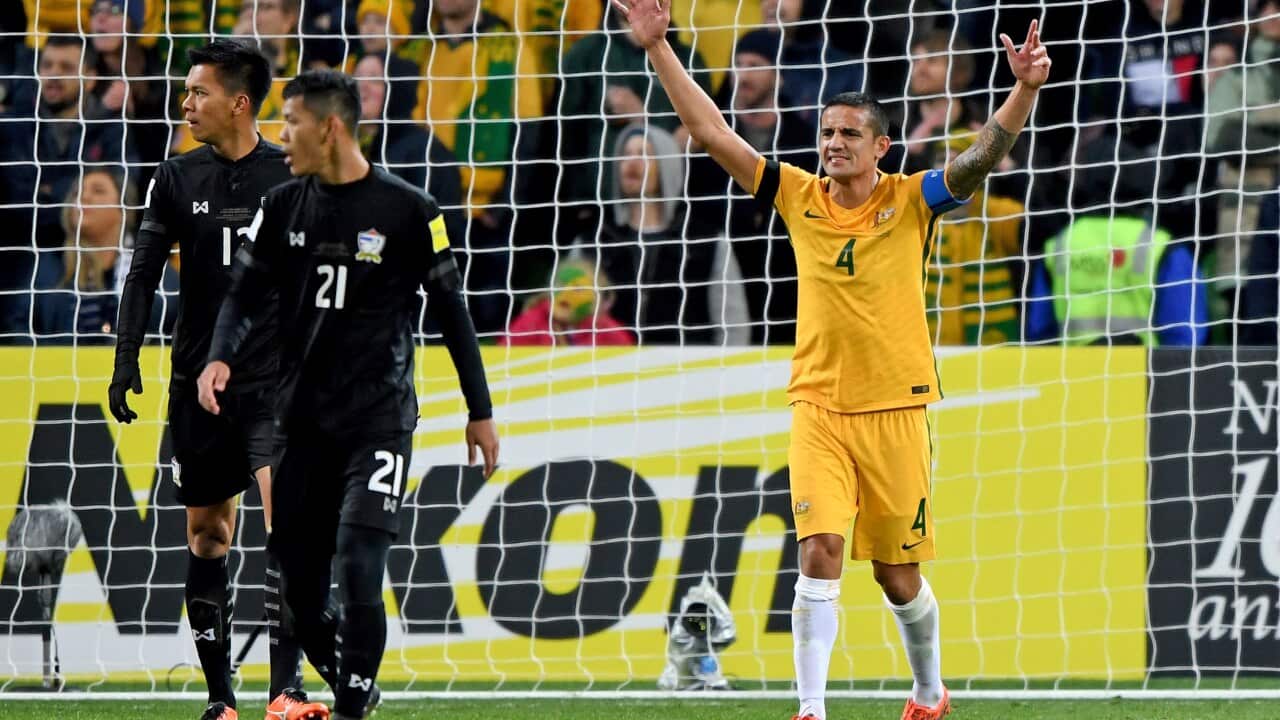 Australia’s fate was decided when Saudi Arabia defeated Japan 1-0 at home, a result that wasn’t complete until eight hours later, leaving the Socceroos in limbo at the final whistle of their own game.

That meant AAMI Park was filled with a unusual mix of relief – given that the Socceroos scraped home for a win – and nervous energy from not knowing the ultimate qualification outcome.

The results meant Australia finished third in their group and will have to qualify via the play-off route, starting with a home-and-away leg against Syria in early October.

Advertisement
The winner of that contest will advance to the inter-confederation play-offs in November, where the fourth-best North American team awaits. USA, Panama and Honduras are all potential candidates.

Cahill said Australia’s match was highly unusual in the way the Socceroos both pushed to score as many goals as possible whilst desperately protecting three points, which they very nearly gave up when Thailand bagged a late equaliser, only for Mathew Leckie to seal the win.

“I don't think I've ever played a game like that in my whole career. It's a weird feeling. I'm a little subdued,” he said.

“When you look at the game, we dominated – totally dominated. We tried so hard to score and I've never seen players throw their bodies at the ball like that.

“The woodwork came into play so much. It's just a weird night. You could put it down to bad luck but the main thing is that we won and it meant that Saudi Arabia had to win.”

The Melbourne City marquee said he stayed up to watch the match between Saudi Arabia and Japan, which was ultimately decided by a solitary goal to Fahad Al-Mulwallad in the 63rd minute.

“I was sitting up late watching the game because football is something that has been a big part of my life and there was no chance I'd miss out on the result,” he said.

“It could have been another monumental moment for Australia to get to a fourth consecutive World Cup.”

While the 2-1 victory over Thailand wasn’t enough to book Australia’s place at the global showpiece, the match saw Australia launch an incredible 45 shots and hold 76 per cent of possession.

But what proved so costly was their failure to capitalise on their advantage, especially in the first half.

“We just said at half time that we just had to keep doing the same things – moving the ball, rotating it, getting it wide, getting into good positions,” he said.

“Aaron Mooy played a beautiful ball, a cultured cross into Tommy [Juric] and in the end [after Thailand's goal] we scored again, which is exactly what we needed.

“We needed a reaction to win and that's the positive thing. We took the three points and now, hopefully, we will move on to bigger things.”

Australia’s first leg against Syria will take place October 5 with the return leg on October 10.