The controversial 'Anthony Caceres rule' that allowed the player to make his way from Central Coast Mariners to Melbourne City via the latter's parent club, Manchester City, will be reviewed at the end of the season. 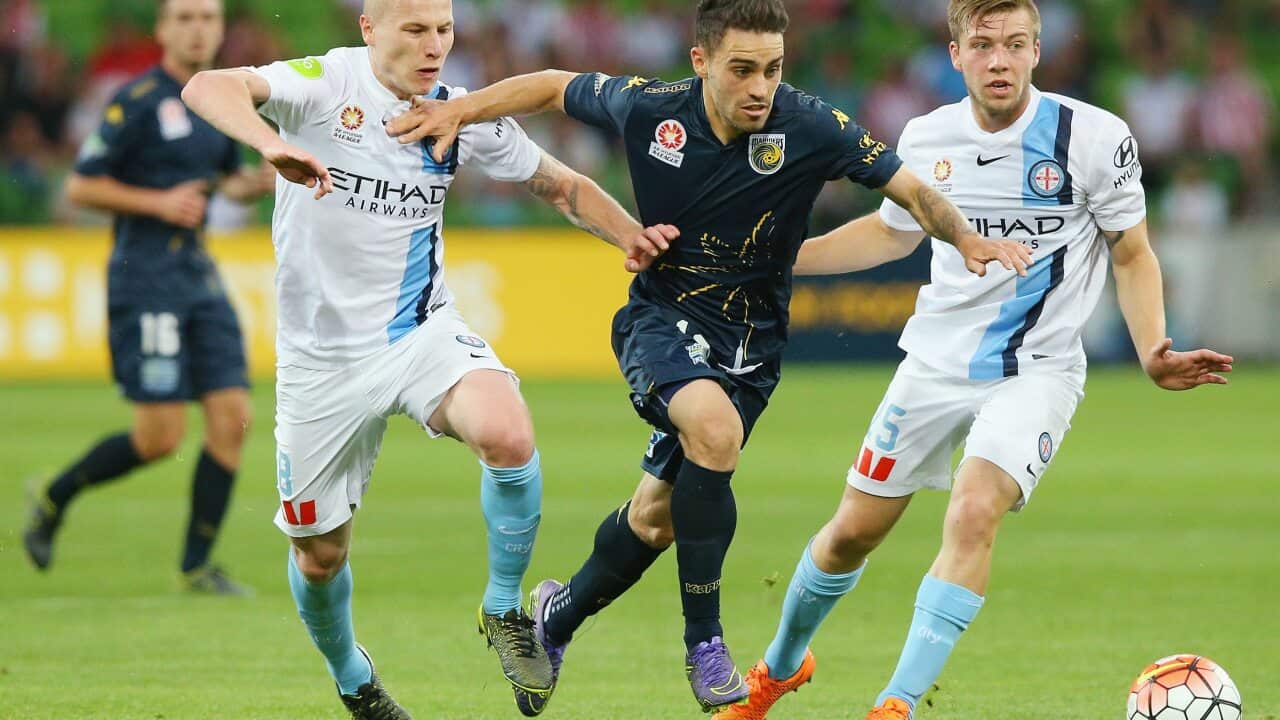 Football Federation Australia (FFA) told The World Game that while the process by which Caceres ended up at Melbourne City was legitimate under the rules, such regulations were reviewed annually. Sydney FC CEO Tony Pignata has robustly led calls for a review.

Advertisement
The statement released by FFA read: "The transfer of Anthony Caceres from the Central Coast Mariners to Manchester City and the subsequent loan from Manchester City to Melbourne City has been completed in line with the current FFA regulatory framework,” said Head of the A-League, Damien de Bohun.

"Those regulations are reviewed in the normal course of business after every season."

There would have understandably been no anticipation of a body such as the City Football Group, owners of English Premier League giant Manchester City, purchasing an A-League club when the rules were first put in place.

On Twitter on Tuesday, Pignata was highly critical of the rule that allowed the move.

Elaborating in a conversation with False 9, Pignata described it as a loophole that needed to be closed to be fair to the other nine A-League clubs, which don't have big-spending parent clubs.

"What Melbourne City have done is legit, you know, they've loaned a player through Man City and the transfer window's open and I'm sure that what's required to go into the salary cap has been approved by the FFA," Pignata said.

"But what I'm saying is the current laws are wrong and that they need to be reviewed at the end of the season because there's a loophole and it's not a level playing field for all the other clubs.

"Your parent club buys the player and then, because there's no transfers between A-League clubs, effectively Caceres has gone from Central Coast to Melbourne City via Man City.

"If they say that we're allowed to do loans or transfers between A-League clubs, then so be it, but at the moment we're not allowed to do it. The only way you can get another player is if his contract is terminated and another club can pick him up."

After posting an initial tweet about the Caceres move, Pignata later posted another tweet, which he told False 9 he did to clarify his position on the matter.

"I just wanted people to be sure that I'm not saying there's anything sinister behind what Melbourne City have done," Pignata said.

"What they've done is totally legit under the current laws, but if everyone just sits on their hands nothing gets done (in response).

"I believe in building this league up and making sure this whole game grows, and I'm sure if you asked the FFA they would acknowledge that it is something they need to look at.

"You can't change the rules mid-season, but at the end of the season let's look at this rule and see what can be done to make it fair and equitable across the league."

Meanwhile, football fans have swamped Caceres with congratulations for the wonderful career he had at Manchester City in the five minutes between him leaving Central Coast Mariners and joining Melbourne City.

Caceres made such an impact that Manchester City manager Manuel Pellegrini told him: "I don't believe that anybody feels the way I do about you now."

OK, there was no such conversation and, yes, False 9 is taking the you-know-what. In all honesty, good luck to Caceres, he is just trying to further his career.

And if you recognise those words attributed to Pellegrini but which he never said, you won't be surprised to learn they represent the cue for one of the most annoying Mancunians ever to see the light of day, Liam Gallagher, and the rest of Oasis to take to the stage.

The Perth Glory coach shared these comments after his team twice came back from a goal down to draw 2-2 with Melbourne City on Saturday night.

Maybe Luis Garcia can bring another veteran ex-Liverpool star in Ray Clemence with him to Central Coast Mariners. After all, he's only 67!

It was vintage Kosta Barbarouses for Melbourne Victory in their 4-0 win over Brisbane Roar. His game consisted of two goals and much tormenting of the opposition defence, and when he is in that sort of form he is one of the best players to watch in the A-League.

Barbarouses said Victory had been determined to pick up where they left off the previous week, when they came back from 3-0 down at half-time against the Mariners to force a 3-3 draw.

"I think we took a lot out of that second-half and we were anxious to get out there again," he said.

"We've been waiting to put in a full 90-minute performance the whole season and I think we can really say we did that in this game.

"If we can build on this and find some consistency we'll be alright."

Wellington Phoenix coach Ernie Merrick, after his team had lost 3-1 to a Newcastle Jets side that had not scored a goal in six straight games before that.

"Newcastle did well and deserved to win, especially after going down to 10 men after 60 minutes, and it just shows you it doesn't matter how much possession you have or how many shots you have at goal, we had 548 passes, a record, we had 20 shots at goal, twice as many (as Newcastle), and yet the only person who could score for our team was a 19 year-old substitute wing-back and that sort of sums up our last half-a-dozen games."

What better way to finish off Australia Day than to ease back into the lounge and absorb the clash between Melbourne Victory and Sydney FC?

A morning visit to the beach, an afternoon BBQ with friends, a few cleansing ales and finally a feast of football featuring one of the A-League's biggest rivalries.

That's what False 9 is planning, anyway, and to get us in the mood for our national day of celebration here is one of the more unusual renditions of Advance Australia Fair you're likely to see.