How would you rate the A-League teams based on the best form they have shown this season? False 9 believes the Melbourne teams take the top two spots and that there is no room for Sydney FC in the top five. 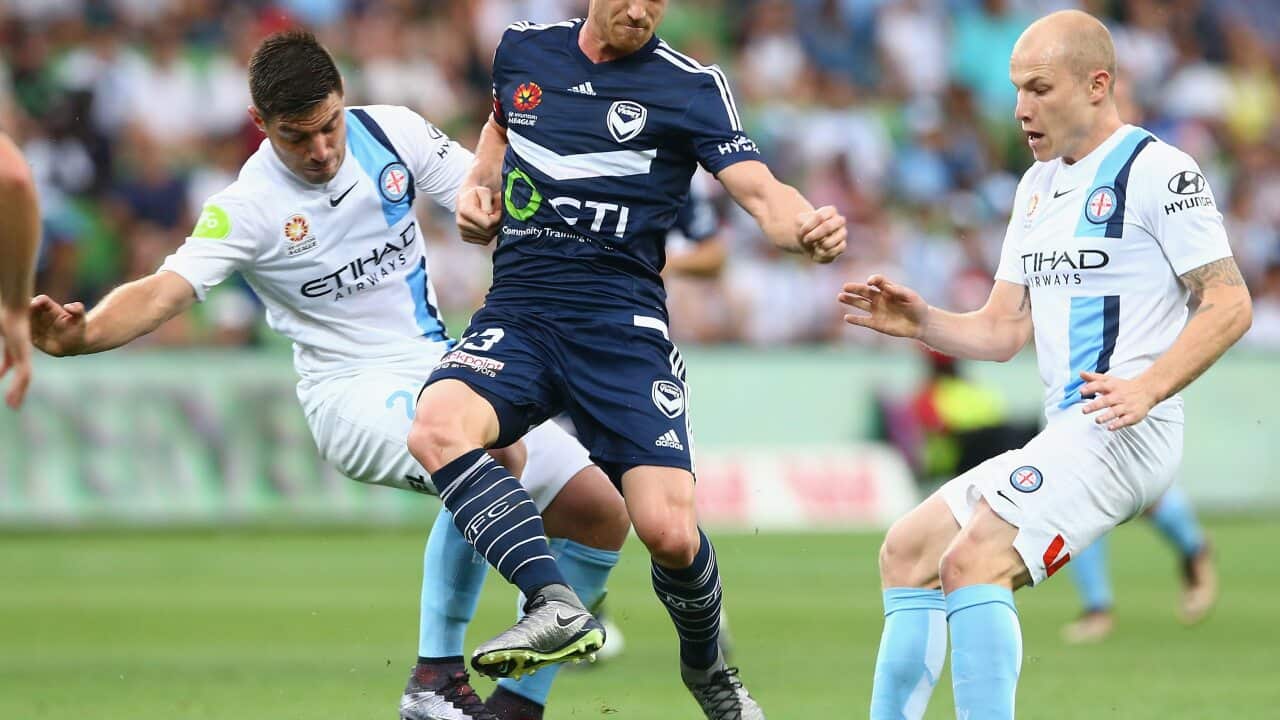 Victory are still the competition's benchmark. When they have been right on their game, such as during the second-half of their 3-3 draw with Central Coast Mariners and the 4-0 win over Brisbane Roar, their form has been better than anything produced by any other team.

It is the perfect time for a debate like this, with rival coaches Kevin Muscat and Graham Arnold having such vastly different takes on what happened in Victory's 1-0 win in the "Big Blue" on Tuesday night, and fans and media getting caught up in the debate as well.

City obviously still need to improve their defence if they want to go all the way, but they are a dynamic attacking team that have been able to rise high on the table despite those lapses at the back. Imagine if they manage to become nearly as frugal as the best defensive teams.

Roar have suffered from being without their front-line spearheads, Jamie Maclaren and Brandon Borrello, for several rounds. It will be interesting to see if they bounce back to their best once those two return.

The Wanderers are a tactically strong team and are right on the hammer of City on best form displayed.

Adelaide have improved dramatically since their disappointing start to the season and may actually turn out better under Guillermo Amor as coach than they were under Josep Gombau.

Sydney have the best defensive record in the competition, but they have needed it because they are well short of being its most dynamic team in attack. The way several other teams perform in attack, a strong defence as their clear focal point won't be enough for Sydney to win the title.

Perth Glory, currently seventh on the table, are the best of the rest on exposed form. They walloped Newcastle Jets 6-1 on Sunday, but the Jets were awful. We need to see Perth register more wins against quality opposition.

Sometimes you've got to take the hardest line

Melbourne Victory coach Kevin Muscat became just the latest public figure to borrow one of history's all-time greatest quotes when, after the win over Sydney FC, he emphasised his desire for his team to attack by saying he would rather they died on their feet than lived on their knees.

This one's for you, Kev.

No-one was asking Newcastle Jets coach Scott Miller to burn Nigel Boogaard at the stake, but he could have been more fair dinkum when asked at the post-match media conference about his captain's offence that resulted in a second yellow card and send-off against Perth Glory.

Instead, Miller replied: "Ah, let’s not even touch on that. What a skipper he is, what a leader he is. It’s an attribute of a central defender who's committed to the club's future and there'll be no blame at his feet whatsoever."

Please. Boogaard is the all-time leader for red cards in the A-League. Newcastle lost 6-1. If that was how Miller treated the matter with Boogaard behind closed doors, then there would be no hope for the Jets.

Surely it was addressed differently in private to how Miller addressed it to the media.

Another Jets player, Jason Hoffman, said in a story in the Newcastle Herald that Boogaard had apologised to the team for his actions. "He felt that he let us down," Hoffman said.

Men of the hour (and a half)

False 9 has gone for the two-for-one offer and doubled up with Chris Harold and Diego Castro, who each got terrific doubles for Glory in their 6-1 rout of the Jets. Perth coach Kenny Lowe waxed lyrical about their contributions.

"Chris Harold has been fantastic," Lowe said. "You know, getting into great positions, creating opportunities for himself, getting on the end of opportunities created by others, and he just hasn't quite finished. Well, today he did all that again and he finished.

"And Castro - the same, fantastic, you know. I'm pleased for these guys, they got their just rewards."

"They say the circle turns around. There'll be better days and I don't mind waiting."

Actually it wasn't "Arnie", but rather the great Richard Clapton in his classic song The Best Years of Our Lives, from the 1982 album The Great Escape. But, who knows? The Sydney FC coach could well be thinking the same thing after his team's third straight loss to Melbourne Victory.

It felt pretty damn good to Bruce Djite to score not just one, but two goals in Adelaide United's 4-1 win over Brisbane Roar and end an 11-month drought for the striker.

The first one came from a penalty and Djite took the shot after regular penalty-taker Marcelo Carrusca deferred after a miss from the spot against Central Coast Mariners in the previous round.

"Last week at recovery I was speaking with 'Chelo' (Carrusca) and he told me ‘I was thinking of giving you the penalty against the Mariners’, after he missed it," Djite said.

"'Yeah, man’ I said and I didn’t feel nervous at all. It’s funny how one kick can do so much, it comes down to that moment.”

Djite's second goal was a great finish after a Brisbane defensive error.

"The funny thing is, it went through his (goalkeeper Michael Theo’s) legs," Djite said. "Before that for the past nine months, I’d take a shot and it would hit someone’s big toe and go out for a corner. It's so funny how the game works like that."

Well, he can laugh now, anyway!

Three weeks after the controversial clash in which Western Sydney Wanderers were crying foul over a disallowed goal from a free-kick that would have given them a 3-2 lead over Melbourne City, in a game they went on to lose by the same score, the two teams do battle again.

Only this time the venue is Pirtek Stadium rather than AAMI Park and the competition lead is up for grabs. First-placed Western Sydney lead second-placed City by two points.

Their last clash was a cracker and with the clear desire of both teams to be proactive it is bound to be well worth watching again. If it keeps going this way they're going to have to find a nickname for Wanderers-City matches.