The False 9: Round 18 - Wanderers must convince FFA they did all they could do

If Western Sydney Wanderers are to avoid a major penalty, such as the immediate loss of competition points, they must convince Football Federation Australia that they have done all they possibly can to prevent situations like the one at Etihad Stadium last Saturday, and that they can't be held solely responsible for what happened. 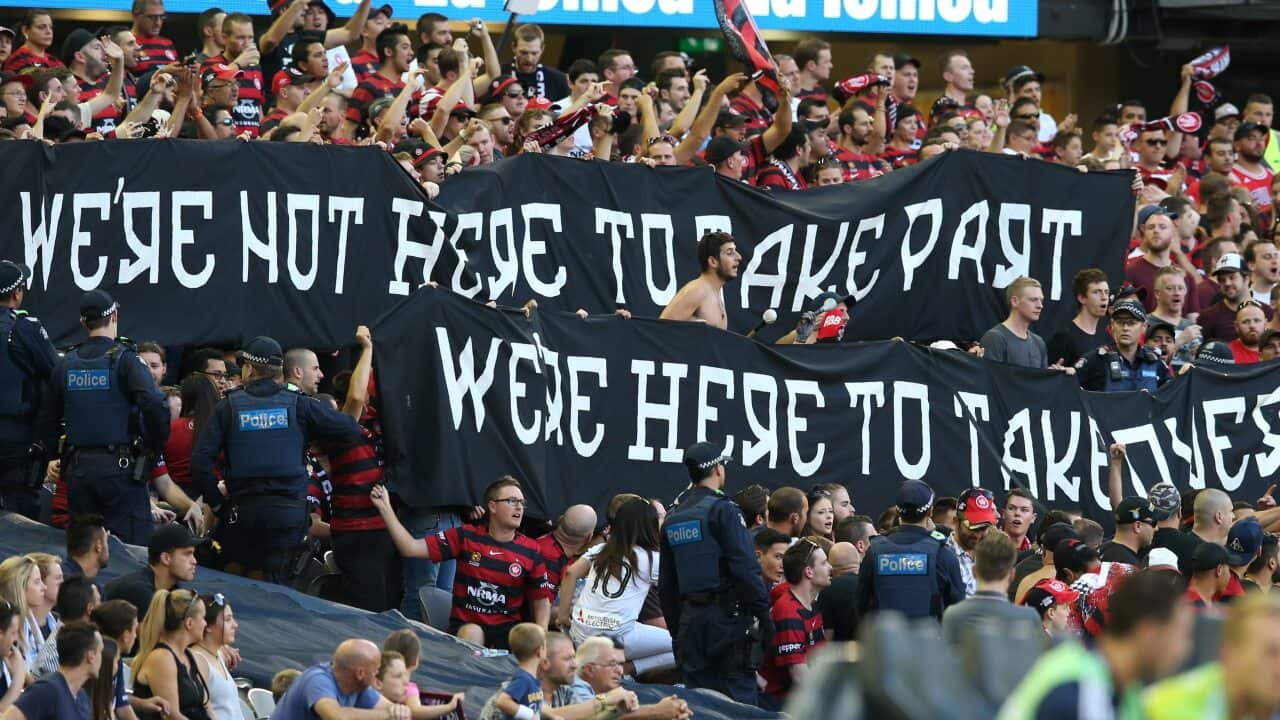 It was clear from the terse wording of the media release issued by the FFA on Monday, in which it gave the Wanderers until 5pm on Wednesday to show cause why they should not face sanctions over supporter use of flares and railway detonators, that their chief executive David Gallop is on the warpath.

Meanwhile, Western Sydney chief executive John Tsatsimas was out in the media on Tuesday stating his club's case. He obviously knows the club faces a battle to placate FFA.

Tsatsimas made it abundantly clear the club has no room for what he described as "this rogue element", and said: "We don't shy away from combating this problem and we have every commitment and resolve that we will combat this head-on."

But the problem for the Wanderers is that this isn't the first such incident involving the club's fans.

Tsatsimas has argued the club has largely eliminated such problems from their home games, where only members can enter the Red and Black Bloc supporter section, but away games present a different problem because anyone can buy tickets for designated supporter areas.

But a high-profile Saturday night game between Western Sydney and Melbourne Victory had to be halted while smoke from flares cleared and detonators were set off. It was extremely embarrassing for the game.

So can the Wanderers convince the FFA that they couldn't have done more to stop that happening?

The screamer that Western Sydney super-sub Brendon Santalab slammed past Victory goalkeeper Danny Vukovic, from outside the penalty box, to force a late draw is one he'll be able to tell his grandkids about one day.

As long as he doesn't go on and on about it! That's the warning from another man with the initials BS who also knows how to thrill the crowds.

If you want to finish the season as the A-League's leading goal-scorer it helps if you are your team's preferred penalty-taker, but Melbourne City's Bruno Fornaroli is defying the odds at this stage.

Fornaroli doesn't take the penalties for City, with Aaron Mooy scoring the only goal from the spot for them this season.

But Fornaroli is still at the top of the competition's goal-scoring list with 15, one ahead of Victory's Besart Berisha.

Berisha has the advantage of being Victory's first-choice penalty-taker and he has three goals from the spot among his 14 overall this season.

Flashback to a beardless and mop-haired Sydney FC defender Rhyan Grant. False 9's guess is he was in a boy band at the time.

Daniel McBreen asked the question, so False 9 gives the answer. The "holder", as he is known in the NFL, is usually the team's regular punter doubling up.

Travis Dodd is not taking any crap from anybody!

On the comeback trail

The most beautiful thing about the beautiful game, at least to "mature-age" players like False 9, is that you can play forever as long as you can stand up.

Someone invented the over 35s, then the over 45s. Hell, who's to say the over 55s won't be next? As long as registrations are cheaper for pensioners! But I digress.

The former Adelaide United and Perth Glory star isn't looking to try to parlay it into something beyond that, he just wants to go out on his own terms after a serious knee injury prematurely ended his A-League career almost three years ago.

"I'd like to finish by my own choice, so I've signed with MetroStars for this season and I'll reassess the situation after that.

"I've only been training with the team for a couple of weeks and the comp starts at the end of the month, so I'm getting stuck into it. I played 35 minutes in a trial on the weekend and that went OK. I thought I might pull up a broken man, but it was actually not too bad.

"I'm quietly confident I'll be able to go around and have a kick and do my bit for the team."

Victory goalkeeper Danny Vukovic was the difference between his team picking up a point, as they did in a 1-1 draw, or losing against the Wanderers.

Western Sydney constantly got themselves into shooting positions during the second-half and were on target with enough of them to win, but Vukovic made several brilliant saves both up high and down low, that proved crucial.

But he had little chance to save Santalab's fabulous equaliser.

Vukovic has had his ups and downs in his first season with Victory and been the first to call himself out on social media when he thinks he hasn't played up to scratch, but coach Kevin Muscat said the goalkeeper was under pressure to consistently reach a high standard.

"OK, last week we conceded three goals, the two games before that we kept two clean sheets, so I think the expectation he is under, 'Vuka', as a very, very good 'keeper is very, very high and he has got to reach those standards week in, week out," Muscat said.

"And we all saw tonight what he's capable of."

Did someone say the Melbourne derby? There are several other appealing fixtures coming up this weekend, but False 9 would be silly if he tried to justify rating any of them above Saturday night's clash between Melbourne City and Melbourne Victory at AAMI Park.

The pressure is on for several reasons starting with the fact neither team has won in the last two rounds (third-placed City loss-loss, fourth-placed Victory loss-draw), leaving each of them six points behind joint competition-leaders, Western Sydney and Brisbane Roar

The loser, if there is one, could drop to sixth depending on other results, with both City and Victory only ahead of fifth-placed Sydney FC on goal difference, and just one point ahead of sixth-placed Adelaide United.

And it's a win apiece so far between the two teams this season, meaning bragging rights from the three-game  series are up for grabs.

So there is a little bit to play for.