The False 9: Round 2 - Bulut will fire, declares Wanderers hero Santalab

Here's the weekly wrap of all things weird and wonderful in the A-League, featuring penalty misses, early-season stars and the ups and downs of the ex-Socceroos who are coaching half the teams in the competition. 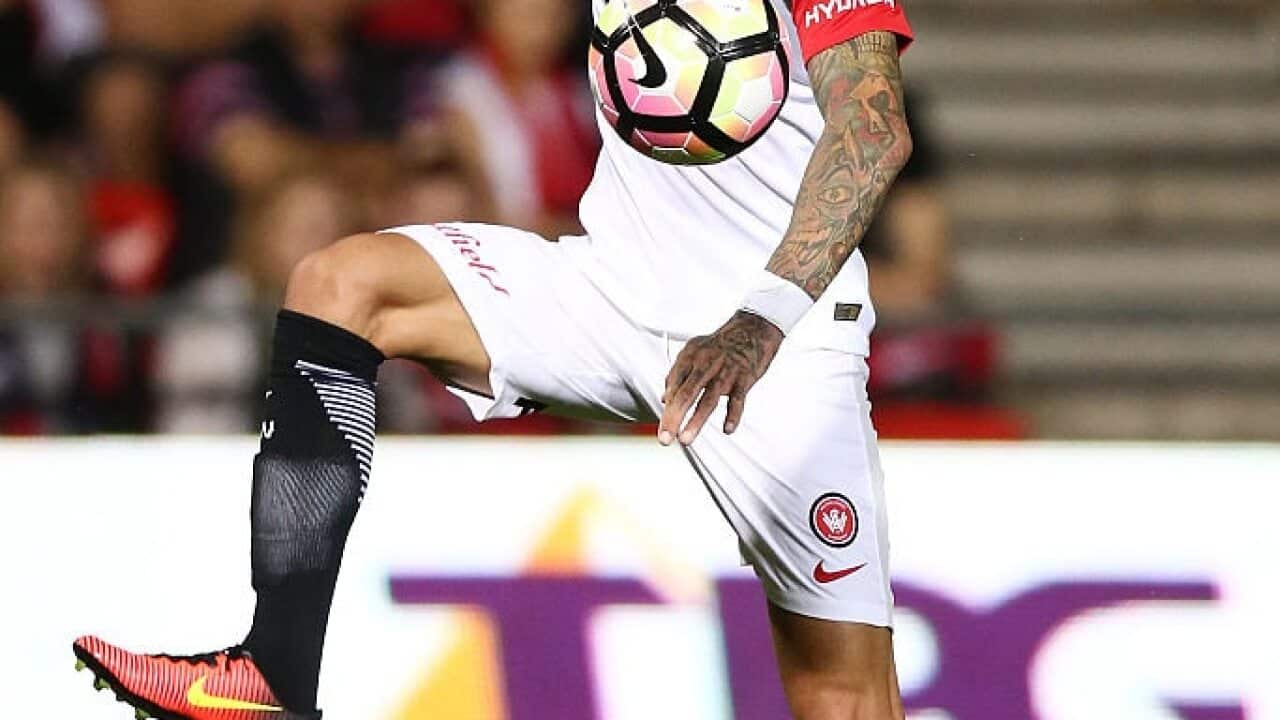 Brendon Santalab may have scored the two goals that got Western Sydney Wanderers the 2-1 win over Adelaide United, but he was more interested in talking up the effort of fellow striker Kerem Bulut.

Bulut, who scored five goals in nine games in his first Wanderers stint in 2015, hasn't scored in the first two rounds this season, but Santalab is convinced the goals will come.

Advertisement
"He's working hard and as a striker sometimes you might not be scoring, but as long as your work-rate is helping the team the rewards will come.

"I told him it's all about persistence and not to give up... It's great to have him back at the club and I'm sure he'll start hitting the back of the net sooner rather than later."

Wanderers, coming off a 4-0 loss to Sydney FC, were one-nil down on the road against Adelaide, but showed the character and determination for which the club has become known to get out of it with a win.

In the words of another whose initials are also BS, it was a case of no retreat, baby, no surrender.

Bulut is actually in pretty good company when it comes to strikers who are yet to get off the mark this season.

Last year's second and third-highest goal-scorers, Jamie Maclaren (18 for Brisbane Roar) and Besart Berisha (17 for Melbourne Victory) are each still on zero as well.

Watch this, Andy, and you'll feel (a little) better

There are no two ways about it, Andy Keogh's penalty attempt for Perth Glory against Wellington Phoenix was a shocker, but in the history of football there have still been many, many worse. False 9 presents just some of the evidence.

His old teammates at Melbourne Victory may not have started the season too well, but Andrew Nabbout is flying.

His man-of-the-match performance in Newcastle's 4-0 flogging of Brisbane Roar was further confirmation of the fact that while he could never force a regular spot in Victory's star-studded side, he had definite potential.

Now we're seeing it come to the surface with a Jets side where he'll get all the game-time in the world.

"Last year we didn't score many goals, this year 4-0. We couldn't ask for much more," Nabbout said.

"The camaraderie here is unbelievable. I'm just so happy for the boys and the coaching staff, but more importantly the fans that come out and support us week in, week out. It's great to repay that faith."

It's a cruel, cruel world

When it comes to declaring your team's dominance on the pitch it can be understandable if you lose 1-0, maybe even 2-0. But after losing 4-0, you've gone too far.

Central Coast coach Paul Okon was adamant his Mariners were the better side in their 4-0 loss to Sydney FC.

"We were the better side and I challenge anyone to disagree with me," he said. "I don't think the style of football cost us four goals tonight. We should have scored a couple of goals.

"It's the way I want to play, to come here and dominate Sydney and play the way we want to. I'm happy with the team.

The Mariners did play well, generally, but if the aim is to stop goals at one end and score them at the other, then how can you be the better team if you lose 4-0?

Okon is one of five former Socceroos coaching in the A-League and it was a wild weekend for the majority of them.

Graham Arnold made it back-to-back wins with Sydney FC and Tony Popovic got the Wanderers to bounce back with a win after their first-round derby loss to Arnold's team.

Muscat's Melbourne Victory lost 4-1 to Melbourne City on Saturday and Aloisi's Brisbane Roar were insipid in a 4-0 defeat at the hands of Newcastle Jets on Sunday.

Muscat, in the search for something to grab hold of going forward, suggested Victory had contributed heavily to their defeat by being well down on their own form, as opposed to performing at or near their best and being outplayed.

“I’m not going to sit here and name individuals. If anything I’ll take responsibility [for the loss],” Muscat said. “If you want to go down the road of naming an individual, that’s not what I do. I think it’d be pretty harsh and unfair.

“It was so far from what our normal standard is, there’s no reason to panic. I certainly won’t. The players will be down on themselves and they'll have tomorrow to digest that. We’ll get back into work on Monday.”