There is only thing we can predict for sure about a "Big Blue" between Melbourne Victory and Sydney FC - sparks are bound to fly. As we gear up for another heated clash on Australia Day, The World Game looks back at five of the best battles in this great A-League rivalry. 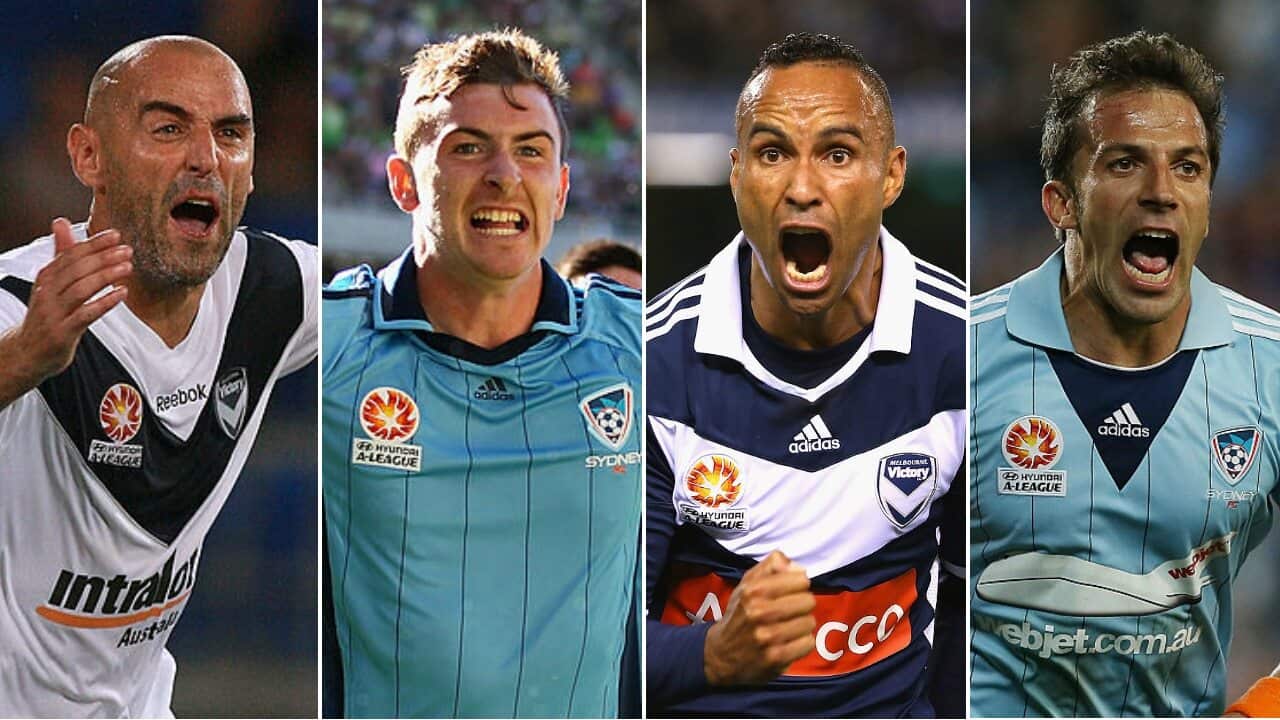 It would be timely to remember this one purely because of the impact Andrew Nabbout is having with Newcastle Jets now, but on its own it stands as a magnificent contest between two great rivals.

Sydney led 2-0 at home through a 14th-minute goal from Yairo Yau and another from Pascal Bosschaart early in the second half.

Advertisement
Sky Blues fans were probably thinking their team was headed for a win as time wore on, but then Nabbout - who had only made his A-League debut a month earlier and was just 19 - came on as a Victory substitute midway through the second half and struck.

Nabbout pulled a goal goal back in the 78th minute and Archie Thompson equalised in the 86th, before the late, late show began.

In the first minute of added time, Nabbout headed home for what proved to be the winner. What a glorious night for Victory.

A stunning first 45 minutes full of action and drama followed by a courageous second half from a 10-man team that refused to give up the lead.

Sydney led 2-0 after just 15 minutes, through goals from Richard Garcia and Seb Ryall, but before the half-hour Victory had equalised, with Archie Thompson and James Troisi the scorers.

But the one-man disadvantage didn't stop Sydney from regaining the lead before halftime, through an Alessandro Del Piero penalty, and in the second half they fought like men inspired to hold Victory out and win, 3-2.

These games are never over. Two-goal leads are no guarantee of anything.

It was the showcase game of the first round of the season and Sydney appeared to be in the box seat with a 2-0 lead from goals by Alex Brosque, in the 36th minute, and Terry McFlynn, in the 53rd.

But then came a stunning turnaround, with a frenzy of scoring from Victory. Three goals in seven minutes, from Leigh Broxham, Mate Dugandzic and Billy Celeski, and the lead had changed hands.

It still wasn't over though, and in the 86th minute the Sky Blues ensured the points would be shared when Shannon Cole scored a with a free kick.

The reputation of the Big Blue for producing stunning contests was continuing to grow.

The first grand final meeting between these two teams was a cracker that went all the way to being decided on penalties.

There was a crushing blow to Victory early in the game, when Archie Thompson was taken off with a torn anterior cruciate ligament in his knee.

In the 63rd minute, Rodrigo Vargas thought he had scored for Victory only for the offside flag to go up, and straight away Sydney counter-attacked and scored through Mark Bridge.

Adrian Leijer equalised for Victory in the 81st minute and after it was 1-1 at fulltime the game went another tension-packed 30 minutes of extra-time without addition to the scores.

Then came the penalty shootout, and the Sky Blues proved the coolest under pressure, winning it 4-2 to take the title. The shootout included a rare miss by master penalty taker and now Victory coach, Kevin Muscat.

It wasn't the first time there had been a 5-0 flogging in a Big Blue, but it was the first time one of the two teams had done it on the opposition's turf.

Sydney went to Melbourne and dominated at Etihad Stadium on Australia Day, with marquee man Alessandro Del Piero performing a star role with a goal in each half.

It was 3-0 by halftime, including a Del Piero penalty, and nothing changed after the break as the Sky Blues added two more.

Leading into the next time the two teams met, Victory coach Kevin Muscat recalled: "The one thing I can remember from the whole night was leaving the stadium and feeling how badly we'd let the fans down."

The heavy defeat must have sparked a reaction from the Victory players, because from there they went on a nine-game unbeaten run in Big Blues (four wins, five draws) before losing in the first clash of this season.