The celebrations may still be continuing in Iran after their national team became just the third team behind host nation Russia and Brazil to qualify for the 2018 FIFA World Cup, but the celebratory mood isn’t one shared by the entire country. 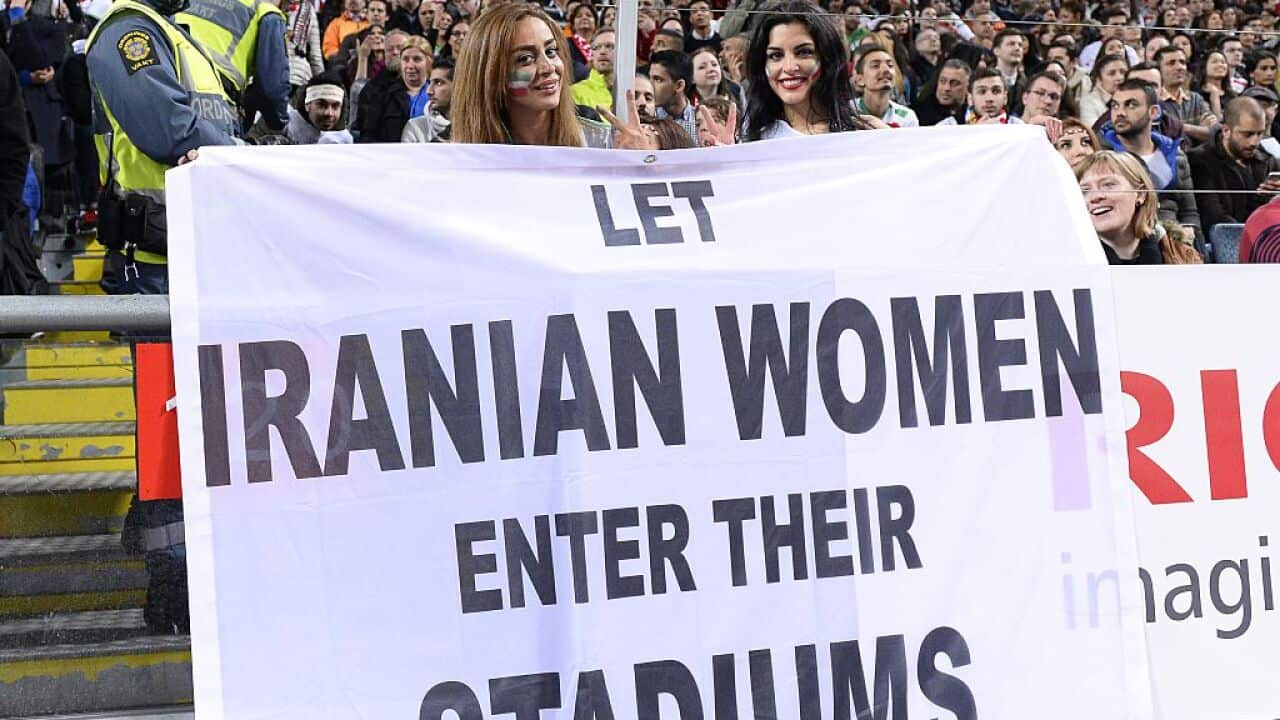 Supporters hold a banner reading 'Let Iranian women enter their stadiums' during the friendly match between Sweden and Iran in Sweden on March 31, 2015. Source: AFP

“Obviously I am really happy that we qualified for the World Cup, but deep in my heart I’m disappointed and a little bit sad too.”

Sara, whose real identity we have concealed at her request, is one of Iran’s forgotten fans, banned from attending football matches in her own country simply because she is a woman.

“It's been 21 years that I am huge football fan but I haven’t had a chance to watch a match normally. You feel like you are not human, (that) they don't count you as part of the nation. It's a very sad feeling,” she told The World Game.

Advertisement
Sara, who was one of the founders of the group Open Stadiums (or White Scarves as it is also known), has been campaigning for access to football stadiums since 2005, when she and a group of like-minded women protested in front of the Azadi Stadium during Iran’s FIFA World Cup qualifier against Bahrain.

Even though the ban is in place it hasn’t stopped dozens of women attempting, successfully or otherwise, to sneak into stadiums to watch their team in action.

Sara is one of those women.

In 2009, desperate to watch her national team live in a World Cup qualifier against South Korea, she and three other women attempted to enter the Azadi Stadium with the South Korean fans.

“As you know, foreign women can enter the Azadi Stadium and one time miraculously we could enter with Korean women,” she explained.

“It was several years ago and security issues weren’t like recent years, but the woman that was responsible for the Korean women handed us to the Sport Ministry security forces.

“We were really scared, and I especially felt responsible for the other girls since I was older. I was thinking we are going to jail, but in a very unexpected situation the security told us just sit in a separate place from the Koreans. They were nice.”

Given the ordeal, Sara has mixed memories from that match, which ended in a 1-1 draw thanks to Park Ji-sung’s late equaliser.

“It was our first and last time in Azadi,” Sara explained. “It was like a dream come true, we were so stressed and happy. But unfortunately just a year later the political situation changed completely and doing this (again) was impossible.”

The ongoing campaign by Open Stadiums and other groups has a high profile supporter, with Iran captain Masoud Shojaei vocal in his support for women to be free to attend football matches.

Shojaei, who plays his club football in Greece for Panionios, used a meeting with Iran President Hassan Rouhani in the aftermath of their World Cup qualification to push the case further.

“My request for Dr. Rouhani is the presence of Iranian women at our stadiums,” Shojaei told local media after the meeting.

“I know it is the wish of many, including our women. We have many football loving women and I think we might have to build a 200,000 capacity stadium due to the flood of enthusiasm our women have shown.

“I hope this happens and President Rouhani follows this matter closely and more seriously.”

Another vocal supporter of the campaign is Moya Dodd, who sits on the AFC Executive Committee and until recently was a member of the FIFA Council.

“I think the greatest injustice in sport has been the exclusion of women from the world's most popular sport – football,” Dodd told The World Game.

“It shows in many ways, and this is just one. For women in Iran this is hugely important - whether a player who wants to watch football live at the highest level, or a fan, or the mother or daughter or sister of a male player - this is a defining issue of women's rights.

“For those of us who take this for granted, it's hard to imagine the feeling of injustice at being locked outside while only men, and maybe a few foreign women, can watch your team play.”

Dodd, who joined former FIFA President Sepp Blatter on a trip to Iran in 2013, explained it’s not just women in Iran in favour of overturning the ban.

“I have been to Iran, and I've met brave women there who are passionate about our game and risk their freedom seeking change,” she said.

“I've also met many men who believe that the rules should change, including ex-FIFA President Sepp Blatter and Iranian captain Masoud Shojaei, both of whom have spoken publicly in favour of allowing women to attend.”

Blatter implored he leaders of Iran to overturn the ban in 2015, calling the ban “intolerable”.

Dodd cautioned however, that football authorities had limited power to exert control over the policies of individual countries, but still had an important role to play nonetheless.

“We need to remember that this rule did not originate within football. It's the result of developments within Iran, which FIFA and AFC do not control,” she said.

“But when leading figures in football ask for it to be re-considered, I believe it has an impact in supporting those within the system who are willing to consider change.

"As football's leaders look to implement the most recent changes to the FIFA Statutes, including respect for human rights, this issue will surely not rest. The women have waited long enough.

“Football is the world's most loved game. To exclude women sends the message that it's OK to exclude us from the mainstream of society, and that's a matter of fundamental rights.”

“I strongly believe that through football we can bring about changes, overcome socio-cultural barriers and gender discrimination, but we have to be humble and realistic, FIFA does not decide on the laws and policies of any given country,” Samoura told The World Game.

“FIFA is in regular contact with the Iranian Football Association and we met with them during the three Women’s Football Seminars we held in Jordan as part of the build-up to the FIFA U17 Women's World Cup.

“Equal rights and gender equality within the scope of football are of high importance to FIFA and we hope our regular contact and discussions will allow women to access football in all areas of Iran and around the world.”

Until then Sara and her group will continue to campaign, which comes with significant personal risk, but it’s a risk she is willing to take for she knows change will only come through people continuing to speak out.

“Silence is not going to make it better.”