The pains of a leaderless game

Let's declare it game over. The fans have won the PR war and they won it hands down. 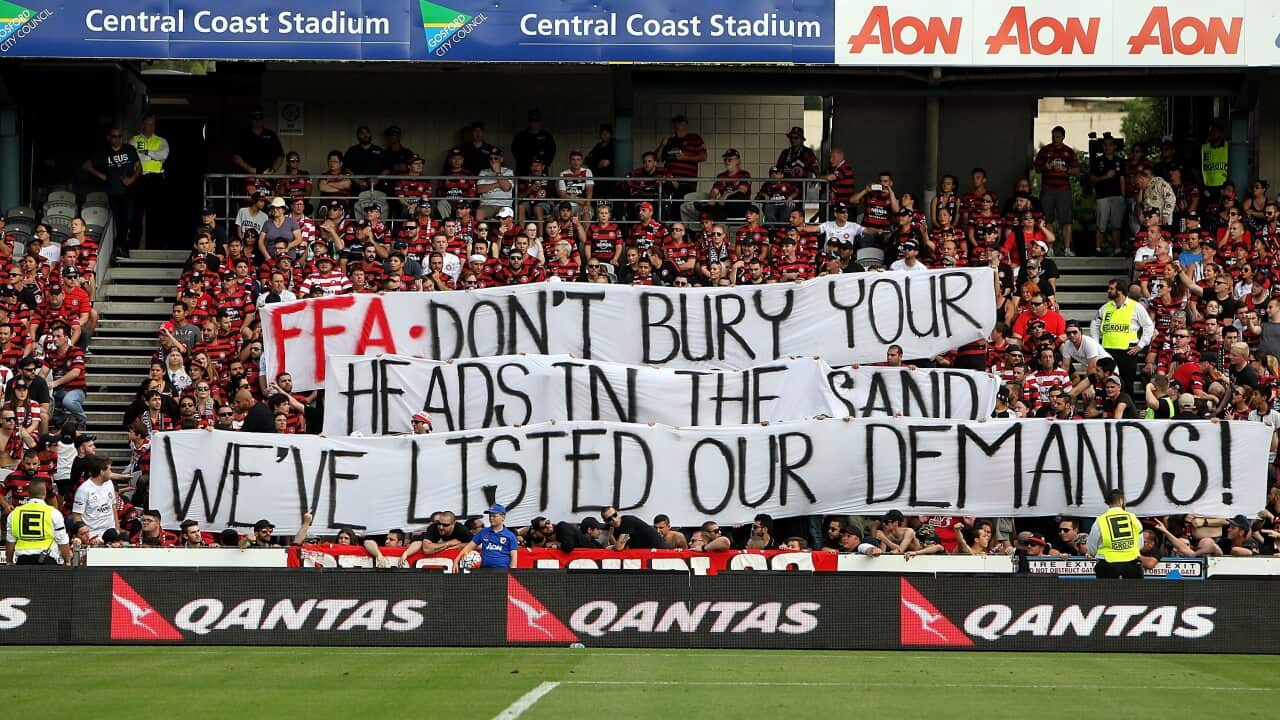 A-League fans made their feelings known at venues across the country during Round 8 matches Source: Getty Images

They won on two battle fronts: against Football Federation Australia, whom they felt had abandoned them, and against the media organ that attempted to defame them.

Whether or not it is to be a lasting victory we don't yet know. The reaction from the FFA to the fan protests has been lukewarm at best. As a result, the boycotts will continue. As for the chronic anti-football hostility within parts of the media, who knows when that will end, if ever.

Advertisement
Still, statements by the fans had to be made and they made them admirably and honourably. The dignified and peaceful way in which the walk-outs by the North Terrace and the RBB were conducted was stunning and the support they received from the rest of the fans in the stadium even more so.

So supported among football people is the stand being taken by the fans that the FFA is now slithering amid the biggest PR debacle in its history - the one-vote failed World Cup hosting bid notwithstanding. This is because in this case the FFA’s woes are entirely self-inflicted.

Steven Lowy, the FFA’s new chairman, must be squirming in his plush office in Castlereagh Street wondering what the hell he got himself into. But of course it could have been so different for him as well as his organisation.

Lowy had missed a wonderful opportunity by not issuing a public response to the malicious attack by the Sunday Telegraph on football and its fans.

Had he reacted, as he should have, by publicly defending the game’s image and the vast majority of fans he would have been seen to be providing leadership and to be a passionate lover and defender of the game. He would now be a hero with the game’s hard core supporters and the current boycotts probably would not have happened.

Instead, what we saw from Lowy’s lieutenants was attempts at self-justification, phallic declarations about their right to be tough with unruly fans and, in the end, FFA CEO David Gallop’s pissant comments about football’s need to ignore their critics.

In the years since football governance reinvented itself in the formation of the FFA there have been frequent calls for the game's messiah, Frank Lowy, to surround himself with more football people. I didn’t always join in with this chorus, believing that good managers are good managers and they don’t need to be opera composers to manage an opera house.

But times can occasionally come when the people in football’s high management positions need to exhibit some serious solidarity with the game if not deep, inherent passion for it.

What Gallop, who until this debacle had shown himself to be a very able manager, needs to understand is that he is not there to merely administer but that his position also carries a responsibility to protect and provide custodianship to the game.

In the corporate world it is called public advocacy. If he doesn’t understand that he is doomed to fail as a manager.

We should not make the mistake of believing those who now claim that we in the football world have over-reacted to the Sunday Telegraph article and that we all suffer from a siege mentality. The article was a blatant attempt to slander the game, nothing less.

:: Why publish this material just when problems concerning A-League fan behavior are actually on the wane?

:: Why publish quotes from a junior assistant police commissioner, who has probably never attended a football match, describing football fans as ‘pack animals’?

Those who fire shots at football because of A-League fan behavior should get a reality check.

The passion with which football is followed throughout the world means such incidents abound everywhere and, in fact, Australian supporters in the main are among the best behaved in the world.

If the good assistant police commissioner thinks our fans behave like pack animals he should sample some of the various ultras groups in Europe or the notorious Barras Bravas in Argentina.

The FFA possess an urge to stamp out fan violence primarily because they are chained to the supposition that football will not be accepted by broad Australian society while fans continue to play up. They are desperate to ‘mainstream’ a game that has an inherently different fan culture to that of other sports.

The passion that fuels football fans is paramount within the game’s culture and can never be extinguished. The only way incidental fan violence will totally disappear is by hosing down this passion or giving every fan a strong dose of valium.

This of course is not to condone fan violence. It is, rather, to accept some realities.

The door is still open for the FFA to put this right.

Gallop, in his frivolous press conference, spoke about ‘fine-tuning' the regulations to give dissenting fans more comfort. He can start by giving banned fans access to the evidence on which their ban is based, something that is not accorded them at the moment. Telling banned fans that the onus is on them to prove their innocence, when they don’t even know on what evidence they had been banned, just won’t cut it.

And he can continue by showing some genuine love for the game he manages and a real capacity to defend it and provide leadership to it.