The renewal of a classic battle: Pogačar vs Roglič

It was a tough day of attacking racing on the second stage of the Tour of the Basque Country as Tadej Pogačar and Primož Roglič renewed their intra-Slovenia rivalry for the first time in 2021. 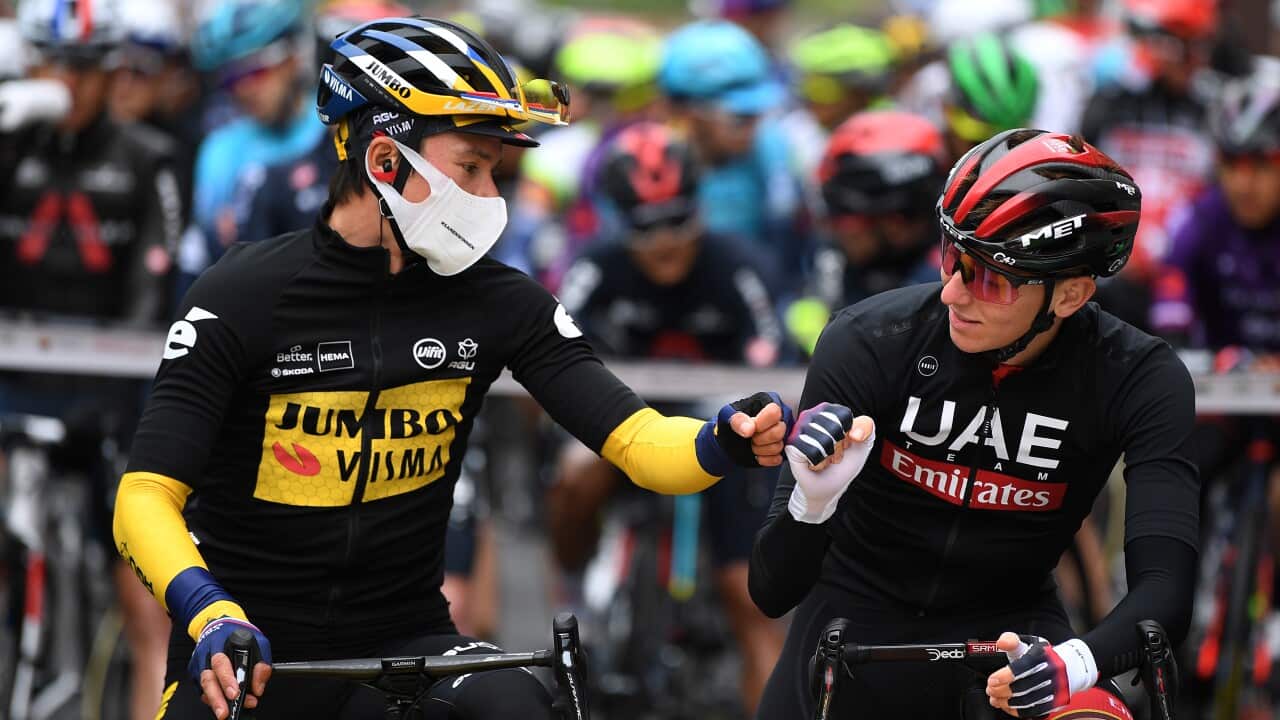 Primoz Roglic of Jumbo - Visma and Tadej Pogacar of UAE Team Emirates on the start line ahead of Stage 2 of the Tour of the Basque Country. Source: Getty

Ever since their series of grueling battles last year, not only at the Tour de France, but also at Liege-Bastogne-Liege and in support of each other at the world road championships for Slovenia, there has been keen anticipation of their next battle.

Pogačar won the UAE Tour and Tirreno-Adriatico, while Roglič was the strongest at Paris-Nice before crashing twice on the final days and surrendering his race lead.

The rain fell heavily on Stage 2 along the 154.8km route from Zalla to Sestao that culminated in the action on the late climb of La Asturiana (7.4 kilometres at 6.5 per cent).

Pogačar and David Gaudu (Groupama-FDJ) used the steep slopes at the bottom of the climb to start the attacks, jumping clear of the other contenders for stage and overall honours. Richard Carapaz (Ineos Grenadiers) crashed on a tight corner, and eventually, a Michael Woods-led peloton caught back up with the two escapees.

Pogačar was then watching the attacks from behind when his teammate Brandon McNulty, second overall, joined Roglič and Sergio Higuita (EF Education-Nippo) as they jumped across to an attack from Max Schachmann (Bora-Hansgrohe) towards the top.

They were caught just over the top of the climb as the course levelled off to a plateau, at which point Astana launched their 1-2 moves. Omar Fraile's (Astana-Premier Tech) initial assault was neutralised by Wilco Kelderman (BORA-Hansgrohe) but there was no answer when Aranburu attacked immediately after, the Astana rider taking the win solo in Sestao.

"Today was a hard day on the bike," said early aggressor Pogačar, who finished third on the day. "The conditions were tough so we focussed on keeping ourselves warm and keeping a good position in the bunch.

"We started the last climb in a good position and myself and McNulty tried to get away. In the end, (Marc) Hirschi put me in the right place for the sprint and we were able to take some bonus seconds on the line.”

It was a hard-fought defense of his overnight lead for Roglič, the Slovenian star having to lead the way at crucial moments with his young Jumbo-Visma squad not present after the early attacks.

"It's racing, you should always expect attacks, there was quite a lot of action on the last climb but it's just racing, like I said, and there's a lot of attacks," said Roglič. "Sometimes you're behind, sometimes you're in front, we'll just see how it goes on the day by day."

Roglič rarely illuminates in his post-race interviews, and was holding his cards particularly close to his chest after the finish in Sestao. When asked why his attack hadn't pushed on a bit further given the quality of the riders present, Roglič responded with some more platitudes.

"If you have legs everyone can attack. We just rode a little and unfortunately, they brought us back, it was a fun thing though.

"It's nice to be there in the mix with the best guys, but it was also quite tricky going up because it was slippery and the pace was high. But I was super careful, without any problems."

Roglič maintained his overall race lead just over Aranburu, just five seconds separating the pair after Stage 2, with McNulty a further second behind. Jumbo-Visma weren't their normal dominant selves on the main climb of the day, meaning that Roglič had to take on a more proactive role, but the likes of Tobias Voss, Jonas Vingegaard, Antwan Tolhoek and Sam Oomen will have to show that their promising abilities can stand up to the rigours of acting as top-flight domestiques in the coming stages.

"I'm here with a team of really young guys and I already had one nice result yesterday," said Roglič. "I've also come from not such nice finish in Paris-Nice. So we'll see how it's going, day by day."