The 10 clubs have some big calls to make - now and over the next couple of months. Who to keep, who to let go, which players to target from the outside. The World Game identifies the key decisions for your club. 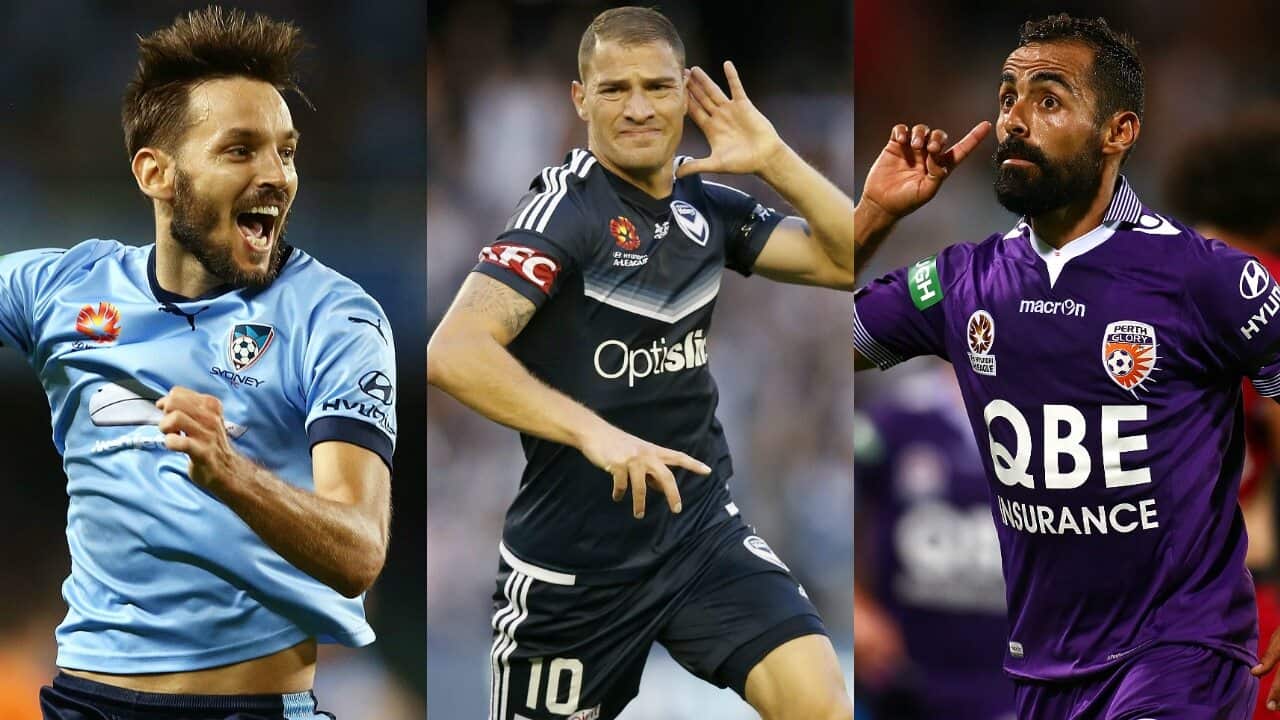 Milos Ninkovic, James Troisi and Diego Castro could all be on the move. Source: Getty Images

It all starts at the top and whether their best player, Milos Ninkovic, decides to go back to Europe no matter what the club offer him.

Filip Holosko and Bobo are the marquee players, but Ninkovic would have to be elevated to that status if he stayed. Holosko would presumably be the one who would have to take a pay-cut.

Advertisement
Keeping Ninkovic is obviously a priority, but it wouldn't be the end of the world if he left.

Sky Blues coach Graham Arnold has proved his ability to find the right players from overseas during the off-season months. He would just have to go out and do it again, like he did with Ninkovic, Holosko and Bobo, and Marc Janko before that.

They're obviously going to have to pay James Troisi marquee wages to keep him, but at least the vacancy is there with Oliver Bozanic having recently departed for Japan.

Victory are in a form slump at the moment and even if they were to make a recovery that was good enough for them to go on and win the competition coach Kevin Muscat knows they must significantly improve their roster.

They can't afford to lose Troisi and Muscat has some big decisions to make in defence as well.

Victory have conceded 20 more goals than Sydney FC this season. They are chasing Rhys Williams from Perth Glory to try to improve in that area.

It's obvious striker Jamie Maclaren isn't going to be there after this season and that creates a huge hole for them to fill. He has scored 10 goals in his last seven games.

The Roar are in the chase for Roy O'Donovan from Central Coast Mariners, but so are several other clubs.

Brisbane are not a high-scoring team overall and Maclaren has scored virtually half of their goals (18 of 38), so replacing him could be the biggest challenge John Aloisi has faced as coach there.

If current marquee Thomas Broich is to stay, he will have to accept being pushed back under the salary cap with his wages.

City, with the backing of the City Football Group, aren't afraid to leave it until the off-season to do a lot of business and that is how it is going to be for them again.

Luke Brattan, Anthony Caceres and Nicolas Colazo are all coming to the end of loan deals. Veteran goalkeeper Thomas Sorensen is off contract and Adelaide United goalkeeper Eugene Galekovic has been linked to the club.

City began the season well, but, again, like last season, they don't appear capable of going the distance. Tim Cahill has suffered from wear and tear in the first year of his two-year deal and will turn 38 two months into next season.

The club need to make astute buys in the midfield and defence to spark things up again.

Nicolas Martinez's loan deal is coming to an end and it will be a priority to work out a new arrangement to keep him.

Brendon Santalab is scoring plenty of goals, but the fact remains he is 34 and the Wanderers remain on the look-out for a younger striker. If they found the right one it would have the dual effect of easing the load on Santalab and extending his career.

Midfielder Mitch Nichols wants to see if he can get a deal in Europe before committing to anything in the A-League, while captain Dimas Delgado's future is in doubt after the team excelled during his recent two-week absence. He was forced to come off the bench last weekend.

Star midfielder Diego Castro, is unlikely to tell the club whether he intends playing again until sometime in the off-season. That suits him, but while the club say that's OK it can't be healthy for them to wait.

The Glory are already losing Josh Risdon and Rhys Williams and if they were going to find another midfield maestro it wouldn't be easy. The more time they've got to do it, the better.

Perth's defence has been awful this season and it is getting worse as we approach the business end. They have got to find the right players there.

Unless something extraordinary happens in the last two rounds, the Phoenix are going to miss the finals again.

On top of that, they are set to lose one of their most skilled players in Roly Bonevacia.

Wellington like to attack, but they need to construct a midfield that provides a stronger buffer between the front line and the defence.

If they don't find the right players, they'll still have the same problems.

The Reds got caught out badly this season because too many of their championship-winning players from last season left - some of them well after the pre-season preparation had begun. They must get their roster settled faster this time around.

Goalkeeper Paul Izzo is headed there from Central Coast Mariners, so the rumours that marquee player Eugene Galekovic is leaving are presumably true. Both marquee spots are available, with Marcelo Carrusca also coming off contract and not re-signed yet.

Adelaide suffered badly from losing striker Bruce Djite at the end of last season. Sergi Guardiola didn't perform and was cut loose. Late-season signing Baba Diawara is showing positive signs, but it's no certainty they will be able to keep him. Getting the right player up front is an absolute must.

They have put plenty of their eggs in the Roy O'Donovan basket. If they miss signing the Central Coast striker it will be a crushing disappointment for them, particularly since they had Dimi Petratos signed from Brisbane Roar only for him to change course and go to Korea.

The Jets are set to lose winger Andrew Hoole, who has created plenty of chances for them this season. He is determined to have a crack at Europe.

It all revolves around O'Donovan and it should be clear soon whether they've got him or not. Sign him and the Jets can attract other players. Miss out on him and it's back to the drawing board.

That is a tough blow, but the fact is while the Mariners have offered him a lot more than he's on now their offer is still not remotely competitive with outside bids.

There are many areas in which the Mariners need to improve their squad, but they make it very hard for themselves because they aren't prepared to spend enough money.

Until that changes, they're going to continue to find it difficult to remain competitive over a long A-League season.