The rise and fall of David Moyes

It wasn’t that long ago that Sunderland manager David Moyes spent his days madly plotting the downfall of Liverpool, an obsession that consumed him for over a decade, first on Merseyside and then briefly in Manchester. 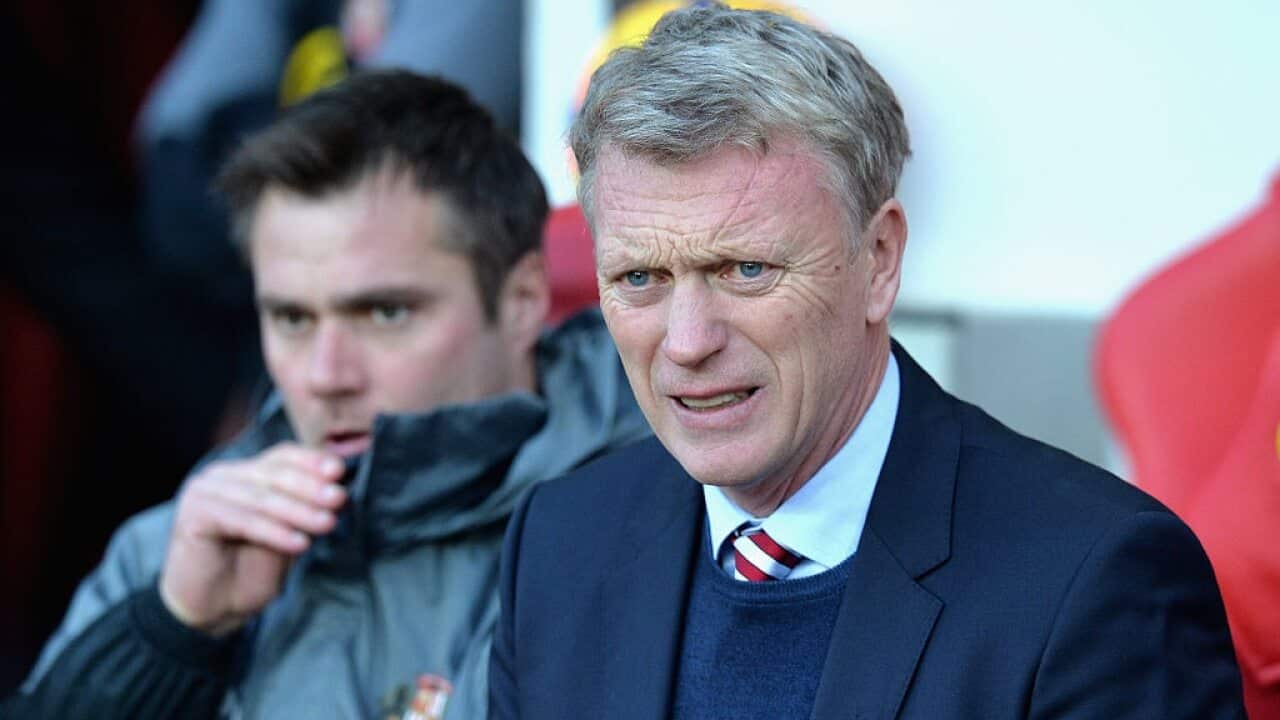 David Moyes will be hoping for his first win at Anfield on Sunday morning (AEDT) Source: Getty Images

He'll have been waiting patiently for this day since the moment he was unveiled as Sunderland manager in pre-season, but finally he gets to take his Black Cats to Anfield to end an extraordinary streak (Live on SBS, Sunday, 1:30am). We'll get to that in a moment.

While wins over Liverpool were once a source of potential bragging rights and points in the fight for European places, Moyes now heads to the city he loves with a vastly different spectre hanging over him: relegation.

At the very least, Sunderland go west with spring in their step. A come-from-behind 2-1 win over Bournemouth saw them win their first match of the season, before a 3-0 hammering of Hull City last week indicated we can’t write them off just yet.

Liverpool, however, are an entirely different proposition. A point off first-placed Chelsea, manager Jurgen Klopp has been busily doing the rounds to downplay expectation. Too late. His team is in the mix for glory, and at the very worst, a return to the Champions League.

And thus this much is clear: the odds are firmly stacked against Moyes this Saturday - and history is like a 800-pound gorilla on his back.

In all his time as Everton manager - from 2002 to 2013 - Moyes never managed a league win on the red side of Stanley Park (nor at Manchester United, Arsenal or Chelsea, for that matter). Extraordinary.

Notably, Moyes did get Everton to finish above Liverpool on several occasions, but failing to conquer the Kop is a fact that he will be surely reminded of this weekend.

Ironically, matches against the Reds were what he lived for. Triumphs were few and far between, but famous when pulled off.

His first victory in the Merseyside derby came when Lee Carsley’s effort sent the Toffees - briefly and unthinkably - to the top of the league in December 2004.

The 3-0 ransacking of Liverpool two years later, in blazing sunshine, was an attacking blitzkrieg, spearheaded by Andy Johnson and derby specialist Tim Cahill. In 2009, it was Cahill who forced a fourth-round FA Cup replay before Dan Gosling’s 118th minute winner. Everton would win another derby a year later - but haven’t won one since.

What’s notable about the above? They were all at Goodison Park. Not even in his solitary visit as Manchester United manager in 2013 could a win be secured (another defeat, this time 1-0).

Unfortunately, for a gentleman of the sport, Moyes has become a diminishing figure. Once revered for his wisdom in austerity, and beating back those who predicted doom all around, he is now a figure of scorn.

With his unfashionable style and touchline emotion - seemingly unacceptable in the digital age - Moyes has become a favourite of chat room hate and online derision. Social media has rendered him a laughing stock.

But the joke, sadly, is the rank Sunderland squad he has largely inherited.

They average a goal-a-game and concede almost two per game. If it wasn’t for 34-year old Jermain Defoe, recruited from a supposed winding-down in Major League Soccer, Sunderland could almost be written off. Seven goals is a fabulous return for a player who could be taking it easy elsewhere.

Victor Anichebe has scored three goals in the past two wins, which may indicate he’s realising his career is on the line. But there is precious little else to get excited about if they continue as they have been for the most part.

Indeed, as he heads towards the famous part of the city that houses the two main football grounds, Moyes must be wondering now what life would be like if he had never left Merseyside. He seemed to have a job for life at Everton, where stability, familiarity and humility ruled in abundance.

Instead, an itinerant, awkward career has followed. The shining lights of Old Trafford blinded him, an odd stint at Real Sociedad ended painfully, and now at Sunderland, another dismal ending would seem likely.

But if ever there was a time to turn it all around, the Anfield gorilla might be the beast he must slay once and for all.