'The Shark' hunts the Giro, new kits and pumping beats

We've put together some of the more awesome roster announcements ahead of the 2021 Giro d'Italia. 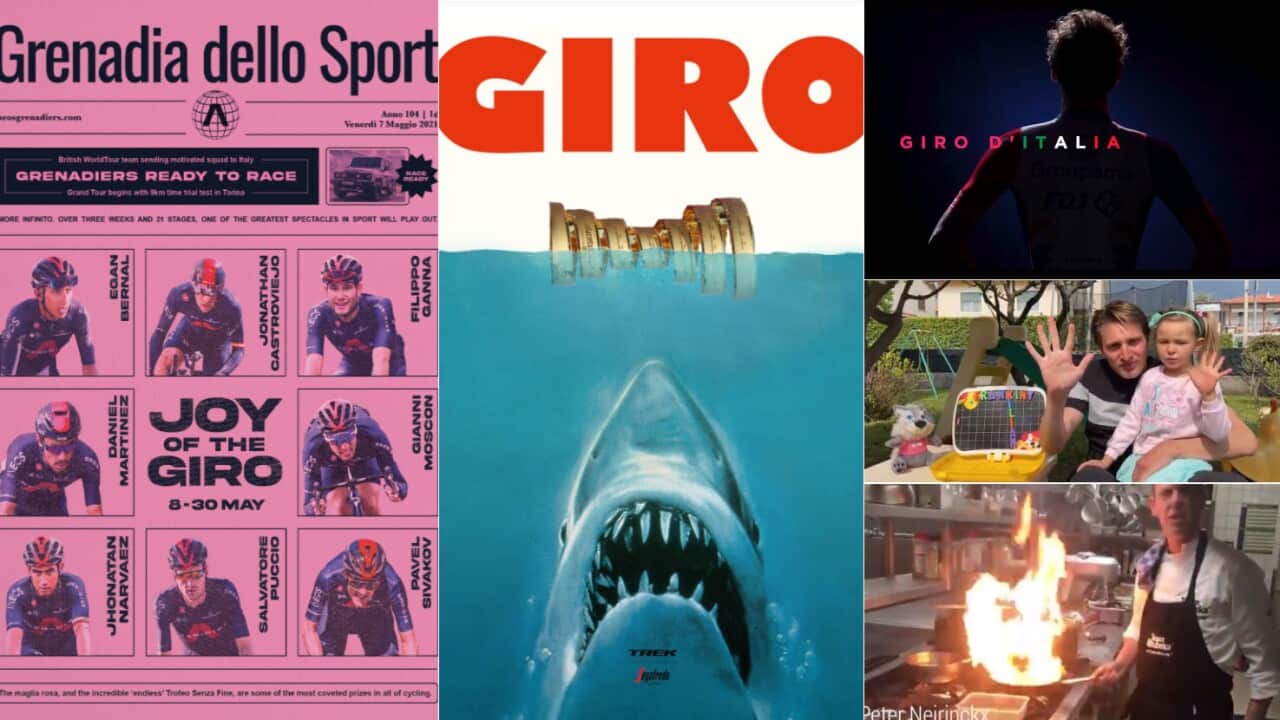 Some of the best team announcements for the 2021 edition of the Giro d'Italia Source: Twitter

'The Shark' aims to strike at the Giro d'Italia with this great Jaws call-back from the good folks at Trek-Segafredo.

The two time winner of the Giro d'Italia, Vincenzo Nibali, is nicknamed 'The Shark of Messina' and the social media people of his squad had good fun with their leader's moniker in their squad announcement.

Advertisement
EF Education-Nippo went bold with their alternate strip for the 2020 Giro, this time it's an almost Mondrian design that will be at least hard to miss in the peloton. The American team is working well in their role as this counterculture to the cycling norm, it's fun to have at least one team shake things up a bit at the top.

There were two other kit changes as well, Israel Start-Up Nation went away from their boring white and navy look with a dramatic swirling pattern and Bahrain Victorious have changed their kit to have less straight lines... maybe nothing else has changed, it feels a bit like a spot the difference challenge.

UAE Team Emirates weren't quite as inventive with their announcement, but they put some heavy beats to the announcement of their squad and at the very least it has the effect of getting people excited for the Giro d'Italia start on May 8!


Qhubeka-ASSOS didn't splurge on the production values, but they had a fun video that showed what they're trying to do in the sport, engage with the community and support the message of bring cycling to everyone!

INEOS Grenadiers have tons of staff behind the scenes but they've never been the best at engaging with fans. Is this Giro a turning of the corner? A nice little Grenadier della Sport front page pays homage to the history of the race and is a fun little image.

If you're lamenting the absence of your favourite team in this list, it's probably because they just did what Groupama-FDJ did... but worse. Riders looking down, then looking to camera and striking some sort of pose is the standard these days for team announcements but FDJ set the gold standard with the editing of their snappy video!

Characters and story first has always been the way since the Dan Jones days at Team BikeExchange, not too much has changed and their focus is clearly on taking us through Simon Yates' journey to a potential maglia rosa in Milan.

Not an announcement video, but Astana-Premier Tech have taken a step up in their videography in the last year and are now putting out some of the best videos in the peloton! A slick production with some truly awesome shots!

Watch the Giro d'Italia action from May 8-30 on SBS VICELAND with commentary every night featuring Matt Keenan, with Robbie McEwen, Bridie O'Donnell and David McKenzie joining for select stages.