The Socceroos' dream and nightmare scenarios at World Cup draw

With the 2018 FIFA World Cup just around the corner, Australia’s hopes of reaching the knockout phase will hinge on the three teams they’ll be drawn alongside in Saturday’s draw. 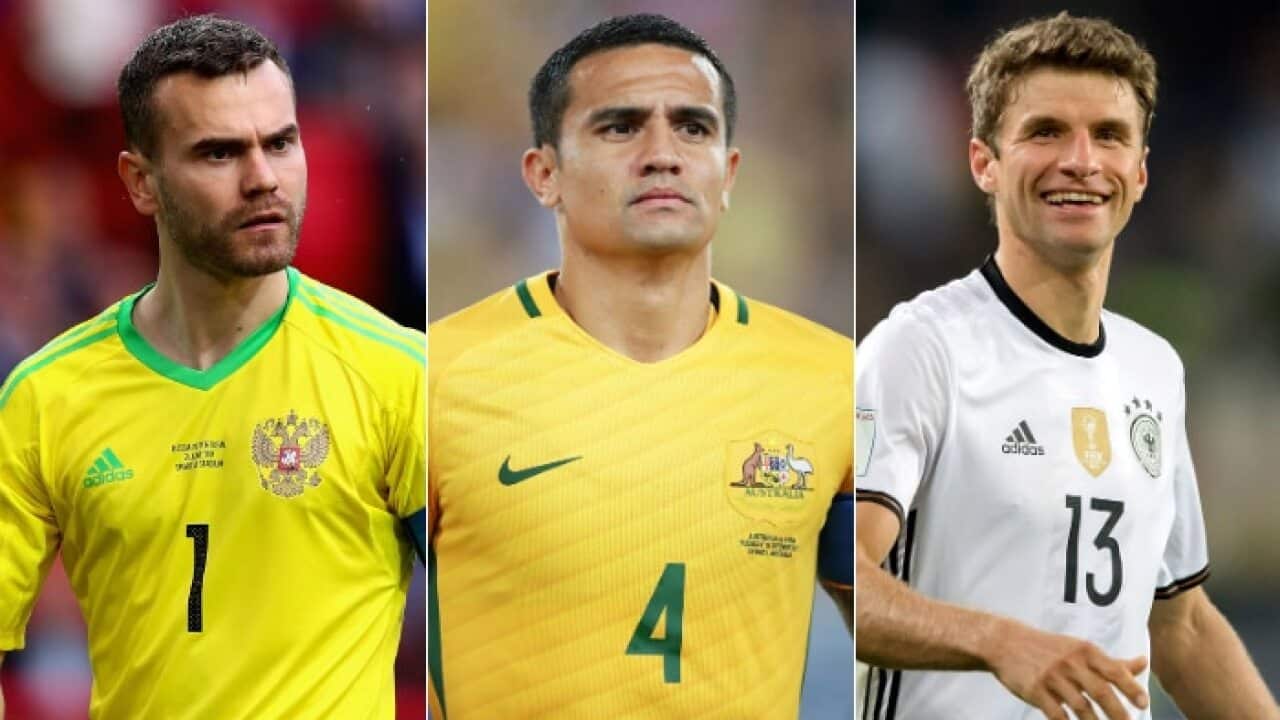 Watch the 2018 FIFA World Cup draw LIVE on SBS, streamed on the The World Game website and app from 2am (AEDT) on Saturday morning.

The Socceroos will arrive in Russia as pot four participants, reserved for the eight lowest-ranked nations.

The draw will divide all 32 teams into four pots, with hosts Russia and the seven highest-ranked nations making up pot one, the next best eight in pot two, and so on.

Advertisement
Only one team from each confederation may feature in a group, except for the European nations, which may have two.

The luck of the draw will shape the approach of several nations, including the Socceroos who will hope to avoid a repeat of 2014 when they were placed alongside Chile, Netherlands and then-defending champions Spain in the “group of death”.

With that, let’s take a look at Australia’s dream scenarios in Russia, as well as the nightmare group the side may potentially end up with.

While rankings do play some part,  it's not really as simple as just picking the lowest-ranked teams when looking at who the most favourable sides are. If that was the case then you would have the Socceroos alongside hosts Russia, Croatia and Senegal. But here's the group we think would give Australia their best chance of repeating their feats from 2006 and making the knockout phase:

When looking at the intimidating nations that form pot one, Russia are the team everyone wants to draw. As the lowest-ranked nation in the tournament, they would easily be the best team the Socceroos could be pitted against.

Russia will make their second consecutive appearance at the World Cup, after failing to qualify in both 2006 and 2010.

While the squad is renowned for their size and physicality, their results under manager Stanislav Cherchesov, who has been in charge since August 2016, have been rather underwhelming.

Cherchesov has managed just five wins in 16 matches, with only one of those coming in a competitive fixture, a 2-0 win over New Zealand in the Confederations Cup earlier this year.

With a largely ageing squad and no notable big name stars, this is a fixture Australia would definitely benefit the most from.

The South American nation returns to the World Cup for the first time since 1982. After failing to make it through automatic qualification, Peru were forced to take the extended rout, defeating New Zealand in a final playoff last month.

After years of struggle, manager Ricardo Gareca turned the side around, guiding them to a third-placed finish at the 2015 Copa America and the quarter-finals in last year's Centenario.

They are ranked a surprising no.10 in the world, placing them in pot two, but on neutral ground in Russia would be a considered a pretty even match for the Socceroos, who took it to Chile at the Confederations Cup and dominated Honduras last month.

The African nation's position in pot three (ranked no.28) is a prime example of FIFA's questionable rankings system, and means Australia cannot be drawn against pot four powerhouse Nigeria as a result.

Tunisia return to the World Cup after a two-term absence and would be a rather favourable fixture for the defending Asian champions.

While Nabil Maaloul's men travel to Russia off the back of an unbeaten qualifying campaign, their success had more to do with their group featuring weak sides than it did their quality.

Maaloul will call on a squad filled with Tunisian-based players, but will turn to Ligue 1 players - midfielder Wahbi Khazri (Rennes) and experienced centre-back Aymen Abdennour (Marseille) - to lead the side.

The Socceroos’ worst-case “group of death” next year would feature defending champions Germany, Spain and Senegal.

The defending world champions' stranglehold on international football in recent years has many tipping them to win it all once again.

Joachim Low has proved his worth as one of the greatest managers in international football history, expanding the nation's talent pool to the point where their 2017 Confederations Cup final win contained a starting XI with an average age of just 24.

The Germans have long been efficient at the senior level, failing to reach the semi-finals of the World Cup on just five occasions from their last 20 attempts, but there is now an undeniable danger about them across every level of the game.

Australia have had several run-ins with the European giants over the years, including heavy defeats at both the 1974 and 2010 World Cup, but will take confidence from their 2-1 win back in 2011 as well as their 3-2 Confederations Cup loss earlier this year.

Russia’s position in pot one leaves Spain occupying pot two as a threatening proposition for the Socceroos who were comprehensively beaten by them 3-0 back in 2014’s edition.

After shocking the world with a dismal group stage exit in Brazil, Spain head to Russia filled with fresh faces and renewed vigour.

Vicente del Bosque's retirement prompted the appointment of Porto manager Julen Lopetegui in 2016, and the side are yet to lose a game since, scoring 52 goals in 16 games and reinvigorating the squad with young talents such as Real Madrid's Isco and Marco Asensio.

Australia's chances of defeating the 2010 world champions, although slim, would admittedly come down to counter-attacks and set-pieces - any sequence of play coming off the back of an intense amount of pressure.

Senegal round up the nightmare group as Africa’s most potent team in the tournament despite ranking below both Tunisia (no.28) and Egypt (no.30) in FIFA's draw-based October rankings.

Aliou Cisse's side have qualified for their second ever World Cup and will hope to replicate their incredible feats from 2002, where the side reached the quarter-final after impressive performances against France, Uruguay and Sweden.

Boosted by their 1-1 draw with African Cup of Nations champions Cameroon at this year's Confederations Cup, the Socceroos' record against African opposition is rather respectable. Nevertheless, Senegal is definitely one nation they would love to avoid.

Why Australia should have hope

Though these best and worst case scenarios remain an unlikely stretch, the Socceroos may still have hope of making it out of their group even with the likes of Germany, Brazil or France representing pot one.

After all, Australia have managed four points – enough to qualify – in two of their last three World Cup campaigns in groups featuring Brazil, Germany and Croatia.

The endless possibilities make Moscow's draw an intriguing prospect. And once the Socceroos know their opponents in Russia, hopefully they'll know who their coach is too.