'This is the Apocalypse!' - Italian media reacts to World Cup shock

Italy's shock failure to qualify for the World Cup after a 0-0 draw with Sweden at the San Siro has prompted local media to label the disappointment as 'the Apocalypse' and call for a revolution in Italian football. 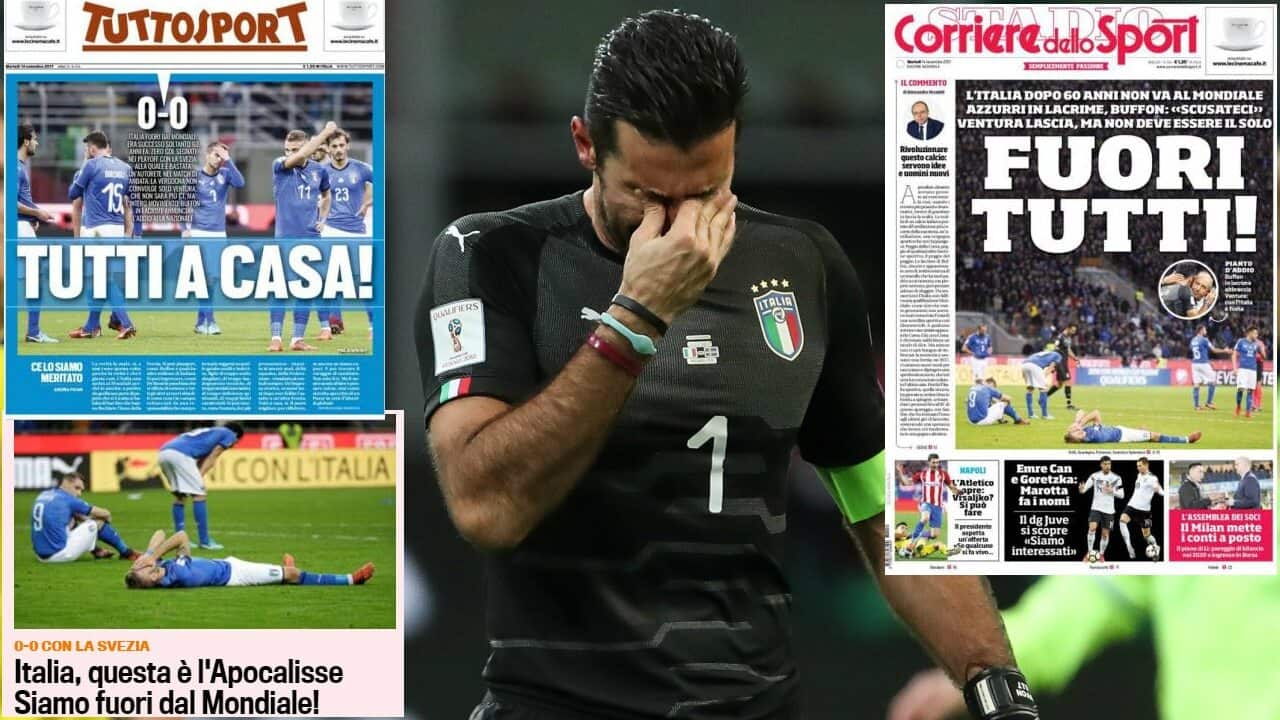 "Italy, this is the Apocalypse! We're out of the World Cup!" was the headline on Italy's leading sports website, Gazzetta dello Sport.

Advertisement
Italy's love for the world cup was on full display as the nation's media was distraught at the prospect of missing a world cup for the first time in 60 years.

"A love so great must be reserved for other things. Italy will not participate at the World Cup.

"There will be inevitable consequences, but let's just see if they stop with Ventura or go further."

Gazzetta were not the only publication to go after both coach Ventura and the FIGC.

"Everybody go home!" demanded Tuttosport on their front page.

Tavecchio's failure to fire Ventura or face the media after the disappointment was labelled an "embarrassing silence" by Tuttosport.

Corriere dello Sport were perhaps the most scathing in their criticism, "Everybody out!" screamed their front page.

"Everybody must go home! There are no alternatives ... this is an intolerable football shame, a permanent stain on our history," wrote Ivan Zazzaroni for Corriere.

"The system does not work, our football is in serious crisis."

Another director of Corriere, Alessandro Vocalelli, demanded a revolution in Italian football.

While Ventura has yet to resign, La Gazzetta were already assuming his time was up, writing: "Ventura, now it's over" and identifying Carlo Ancelotti as his potential successor.

"Whoever comes in will have to rebuild from rubble and work towards Euro 2020," read the article.

"The most fancied name is Ancelotti but there is the possibility (Chelsea boss Antonio) Conte will return, as he is a bit tired of England.

"Very welcome alternatives would be (Roberto) Mancini and (Massimiliano) Allegri, if they can leave their respective roles at Zenit St Petersburg and Juventus."