Ace marksman Archie Thompson has paid tribute to Melbourne Victory striker Besart Berisha who is on the verge of breaking the A-League's all-time goalscoring record. 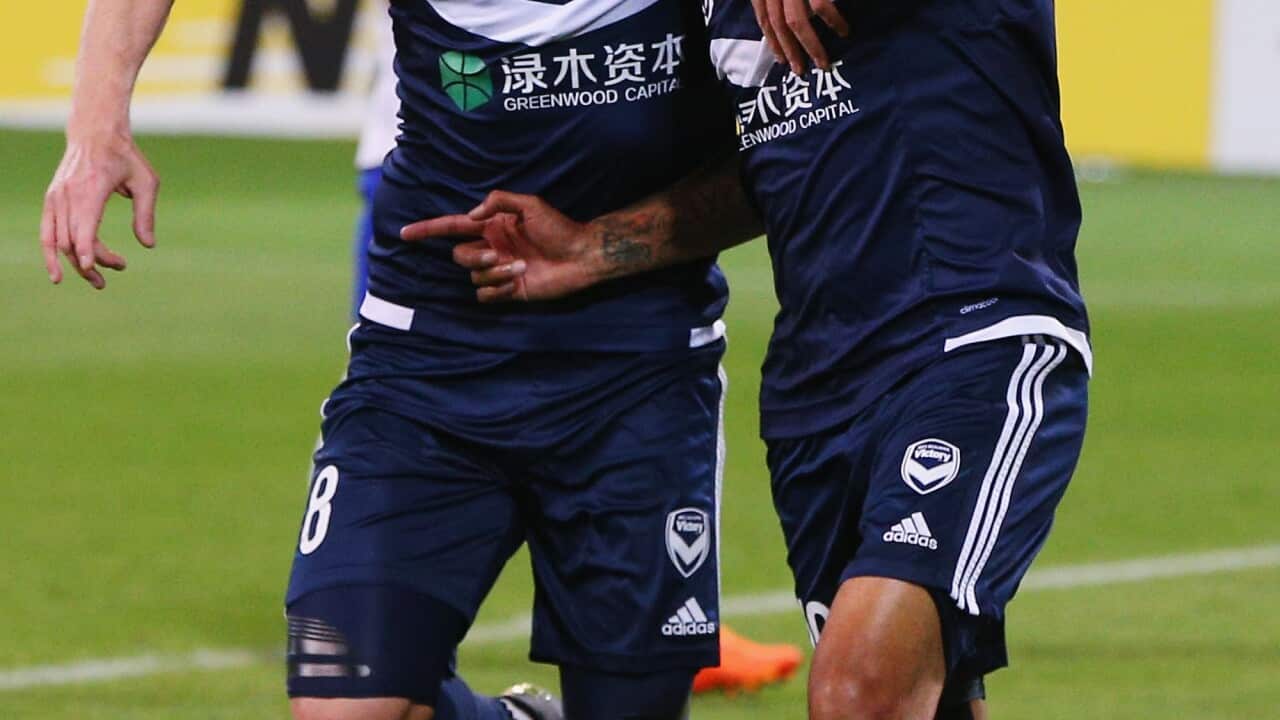 Berisha is one goal short of Thompson's tally of 90 goals and the Albanian hitman could reach the target in Saturday's derby against Melbourne City.

Thomson played his entire A-League career with Victory and was immortalised when he scored five goals in his side's 6-0 rout of Adelaide United in the 2007 grand final.

But while Thompson needed 224 matches for his 90 goals, Berisha played only 139 games in Australia, 76 of which for his first club Brisbane Roar.

Advertisement
Thompson, who retired at the end of last season, was fulsome in his praise of former team-mate Berisha.

"Bes is a pure goal-getter, a typical striker who is always going to score plenty of goals," Thompson said.

"Records are meant to be broken and 90 is not a massive amount of goals and he's played a lot of football the last couple of years, a lot more than I have.

"I could have gone on to another team and play a few more games and score a few more goals.

"But it is not about records and goals, it's more about enjoying the game and entertaining the fans."

Thompson said there was more to Berisha's game than scoring goals.

"I admire his professionalism and his great will to score goals and win things," Thompson said.

"That's why he'll break my record and I'm sure many more."

Berisha's fierce determination and bloodyminded approach to the game got him into strife with players and referees in the first years of his stint in Australia but he has since curbed his fiery temperament without letting this affect his lethal game.

Yet Thompson believes that Berisha has succeeded in the A-League because of his temperament not despite it.

"You cannot change the aggression he shows on the pitch," Thompson explained.

"He intimidates players and opposing teams. He gets right up in their faces.

"He is someone I would not like to defend against because he's at you non-stop.

"Bes might not be the prettiest player to watch but he scores goals and that's what you want from a striker.

"When you look at all the players that are around and who have scored many goals they are all football-playing forwards.

"I'm not a typical striker like Bes, Alex Brosque or Mark Bridge. We are strikers who like to be involved in the game.

"Bes waits and waits for 90 minutes for the right opportunity to strike. I can't do that."

Thompson said there was an aspect of Berisha's game that he could work on and that is "bringing other players into the action".

READ MORE
Five things we learned from A-League round 10

"But as for scoring goals you cannot get any better than him," Thompson said.

"He gets written off and what does he do next: he scores a hat-trick."

Thompson joked that his tally would have been greater had he been allocated the penalty-taking duties at Victory, a job usually assigned to almost infallible captain Kevin Muscat.

"Kevin must have scored about 20 goals from the spot," he said.

"Penalties certainly helped Bes ... they are easier to score than from open play, that's for sure, but he still had to score them."

Thompson, who now works as a television pundit for Fox Sports, has a day off on Saturday due to a family engagement in the country and won't watch the derby.

"I only watch football when I'm playing or working," he quipped. "I will probably learn if Bes broke my record on Twitter or something like that."