Time is right for football to honour the great Charlie Perkins

The Grand Final between Adelaide United and Western Sydney Wanderers provided a fitting finale to the 2015-2016 A-League season but could the three regular-season games between the two clubs be played for something more? Much more. 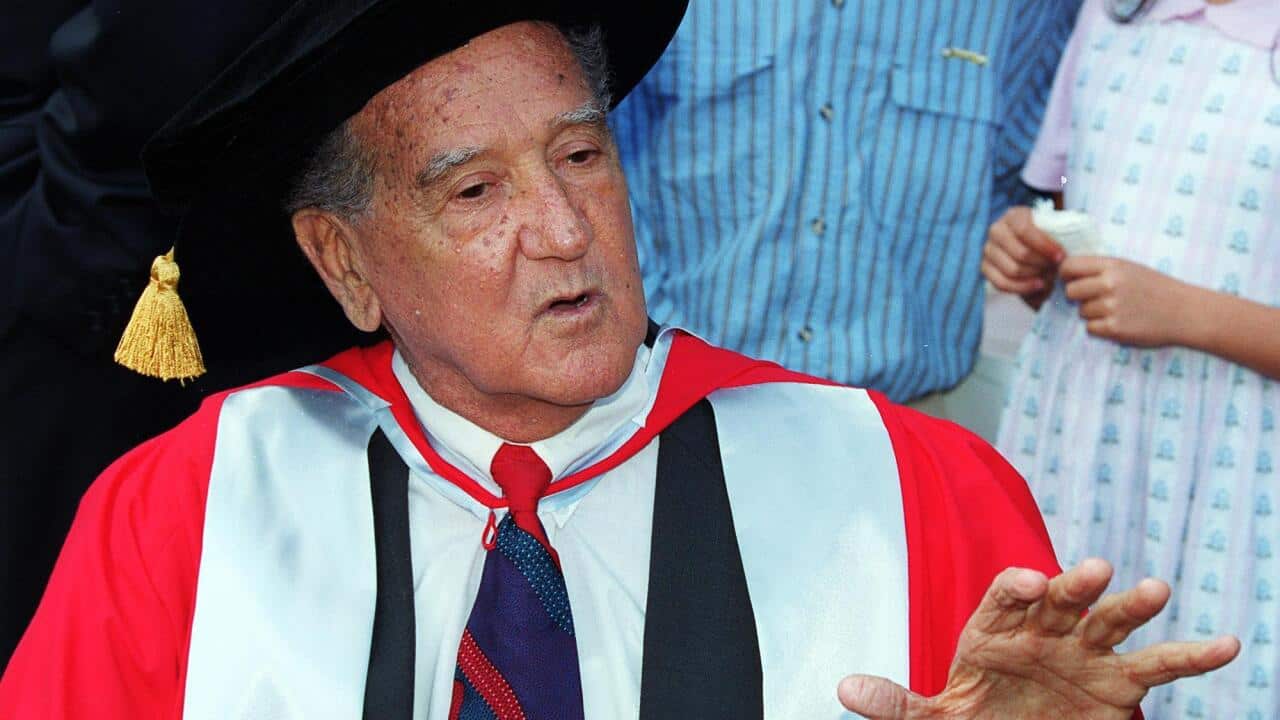 Charles Perkins after he received an honorary Doctor of Law at Sydney University on 11 May 2000 Source: AAP

The introduction of an annual, perpetual trophy in honour, posthumously, of a truly great Australian in the activist and footballer -
Charles Perkins
. It could be called the Charlie Perkins Cup, or something similar, and it would link, via football, the two cities in Australia where he played the sport he truly loved.

The late Dr Perkins, who would have been 80 years old this year, passed away in 2000. He was an amazing footballer and, it is probably fair to conclude, that football in Australia has never really properly honoured the memory of one of their greatest sons.

Advertisement
The career of Perkins was so stellar that in the late 1950s he was invited to trial with none other than Liverpool FC. He ended up at Merseyside rivals Everton before finally trialling with Manchester United a few years later. In those days it was almost unheard of for any Australian to get invited by those great teams for a trial, let alone for an Aboriginal Australian player from Adelaide.

When Perkins returned home from England he enrolled as a student at Sydney University and in 1966 became the first Aboriginal Australian to obtain a university degree. That’s exactly 50 years ago because he graduated on the 11 May 1966 and it’s a milestone that is recognised in just about every secondary school history textbook in Australian schools.

After graduating, of course, he became known for his extraordinary work as an activist who championed the cause of Aboriginal rights. The famous Freedom Ride protest of 1965, which he led and became synonymous with, highlighted to Australian society the great injustices and prejudices that Aboriginal people faced.

Perkins, the footballer, should be recognised by the game he loved. He played for a number of teams in Adelaide before moving to England. When he returned to Australia in 1959, he joined Adelaide Croatia where he became captain/coach.

When Perkins moved to Sydney in 1961 his club was Pan Hellenic (known today as Sydney Olympic) and later in his career he was president of Canberra City in the National Soccer League. He was a football man through and through and was correctly inducted into the Football Hall of Fame in 2000.

The late Johnny Warren in his unforgettable biography Sheilas, Wogs and Poofters wrote about Perkins:

“the Greek and Croatian clubs in Adelaide, and later the Pan Hellenic club in Sydney, were the first Australians to recognise him as a person to be treated equally. He did so much for so many people and that he was such a big part of football makes me very proud.”

Perkins, a tireless champion of progress, equality and social justice, is a person that football needs to properly honour. No other sporting organisation can claim him because he was footballer and it’s a case of better late than never.

In the late 1990s at a Sydney Olympic v Perth Glory game at Belmore Sports Ground, I did very briefly cross paths with him in the back of the press box. He was with Johnny Warren and journalist John Economos and nervously I mumbled a ‘hello’. His genuinely friendly response and smile was truly amazing – here was an icon of Australian society who was humble enough to warmly greet a total stranger.

At Perkins’s alma mater of Sydney University his name is immortalised with the Charles Perkins Centre, which embraces his vision and aims to provide hope for better health for all Australians through research with a particular focus on obesity, diabetes, cardiovascular disease and other related conditions. The Dr Charles Perkins AO Memorial Oration and Memorial Prize have also been established by Sydney University in his honour.

Football now too has the opportunity to ensure that future generations recognise and understand the significance of such a great Australian.

The 2016 A-League Grand Final was a timely connection between the two cities of Adelaide and Sydney and, given that the 50-year anniversary since Perkins received his degree is upon us, this nice nexus would seem to be an ideal opportunity to start an annual trophy in his name.