Top ten A-League players on the market for next season

As we approach the business end of this season there is frantic work going on behind closed doors with clubs try to keep star players or sign new ones for next season. The World Game looks at some of the best players still up for grabs. 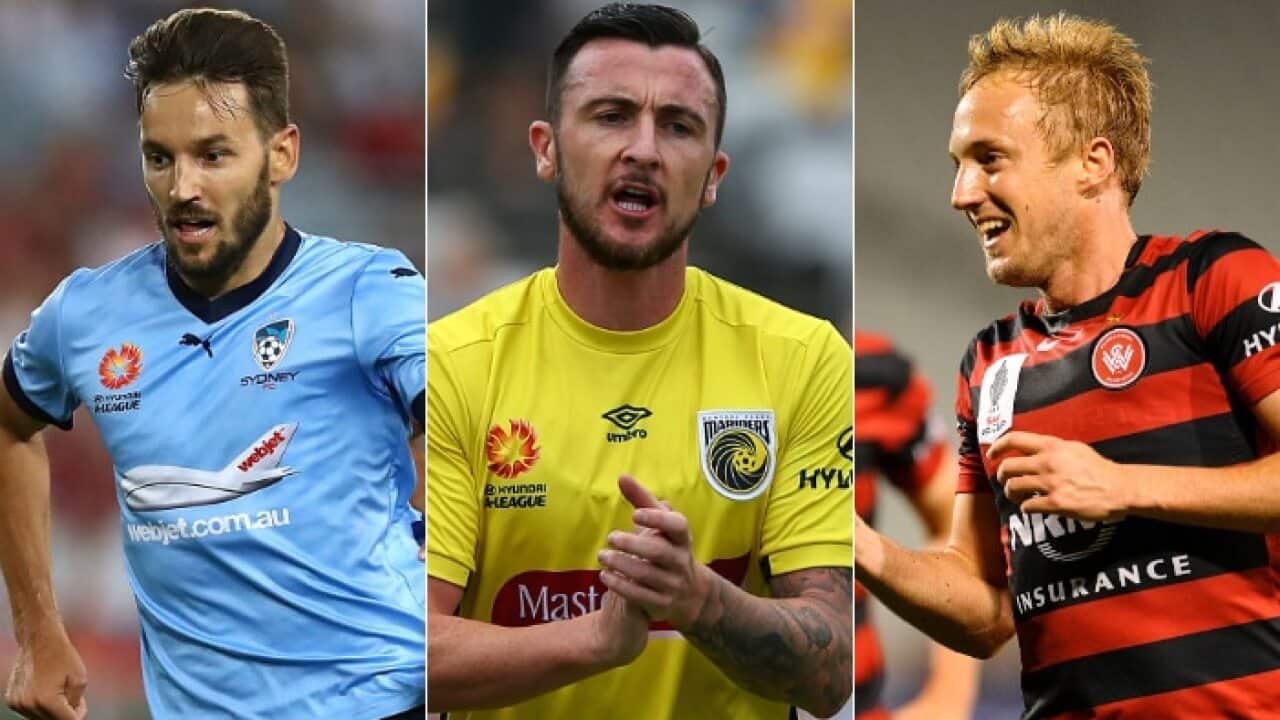 Advertisement
Rejoining Victory on a one-year contract after it didn't work out for him in Saudi Arabia and China has been a great move for Troisi.

His form has been excellent, leading to a national team recall and significantly increasing his bargaining power.

Victory coach Kevin Muscat was asked after Saturday's 4-1 win over Perth Glory where things stood with negotiations on Troisi's future:

"If you're asking me right here and now do I want him to stay, yes, of course I do. Are we working on it, yes, of course we are. But apart from that I can't tell you anything because we do respect the players' privacy," he said.

Scoring goals for anyone is a good look.

Scoring goals for a struggling side is even better because it makes you wonder what the player would be capable of in a stronger team, receiving better service.

It would be a heartbreaker for the Mariners if they weren't able to hang on to O'Donovan after this season, but they haven't been able to re-sign him at this stage.

It is obviously a real threat with Newcastle Jets, Western Sydney Wanderers and Adelaide United among the clubs interested.

Castro turns 35 in July, but that is not an issue. He won the Johnny Warren medal as the competition's best player last year and is in the running to win it again this season.

He has got the ball on a string at the moment. The Glory want him to go around again. The question is whether he wants to stay.

Last year, it took a couple of months of thinking it about back home in Spain before Castro re-committed.

Glory owner Tony Sage was quoted in Perth media on Friday saying they're happy to let him take his time again:

"In the end, it's just about his desire and what he wants and what's best for his family," Sage said. "We're not going to push him. It's his decision."

The favourite for the Johnny Warren Medal is not one of Sydney's two marquee players - Filip Holosko and Bobo fill those spots - but surely after the brilliant season he has had, Ninkovic will be seeking marquee-level wages for next season.

That means the Sky Blues will have some very important decisions to make regarding their priorities.

Contract negotiations between him and the Roar broke down some time ago and it appears there is no chance he will still be there next season.

Maclaren is keen to try his luck in Europe and after missing out on the latest Australia squad that may be where he needs to be to give himself the best chance of getting back in.

It has been tougher for him this season because he no longer has genuine wingers like Romeo Castelen and Mark Bridge to combine with, but he is still working hard to try to make something happen.

It wouldn't surprise if his old club, Brisbane, had a crack at him for next season, particularly with Thomas Broich now 36 and no guarantee to still be there.

It has been reported Central Coast goalkeeper Paul Izzo will leave at the end of the season to rejoin his home-town club Adelaide, and having established himself as the No.1 goalkeeper where he is he wouldn't be going back there to play second fiddle.

The rumours have been around for months that Melbourne City are interested in signing Reds captain Galekovic and a player with his reputation would be likely to have something on the boil somewhere if he's not staying where he is.

He wouldn't want to be going anywhere to play second fiddle either.

Newcastle had him at the top of their retention list, but recently withdrew their offer after the two couldn't reach an agreement on a proposed buyout fee if Hoole received an offer from overseas that he wanted to accept.

Hoole is seeking a contract in Europe. If he doesn't get the right opportunity and switches plans again to stay in the A-League there is no guarantee it will be at the Jets because by then they may have bought another player to fill his role.

The talk for a while now has been that he wouldn't be re-signing and with no news coming out of the club on a player whose signature would be a priority - it appears his stint at the Phoenix has run its course after three seasons.

The question is: Where will he go? If he's to remain in the A-League, there have been rumours for a while now that Western Sydney are interested, but they wouldn't be the only club.

Carney is not getting much game-time off the bench for the Sky Blues and that's not healthy when you're 33 and trying to extend your career.

He wasn't used at all in the 1-0 win over the Mariners on Friday night.

It's not that Carney has lost it. When he does get on, he invariably plays well. Sydney simply has a red-hot front four and Bernie Ibini can't get into the starting side either.

Sydney apparently want to keep Carney, but he may have to look elsewhere to play more often.