Substitute Francesco Totti once again inspired Roma to a dramatic late victory as the Giallorossi rallied to beat Genoa 3-2 at the Stadio Luigi Ferraris while Napoli edged Atalanta to remain second. 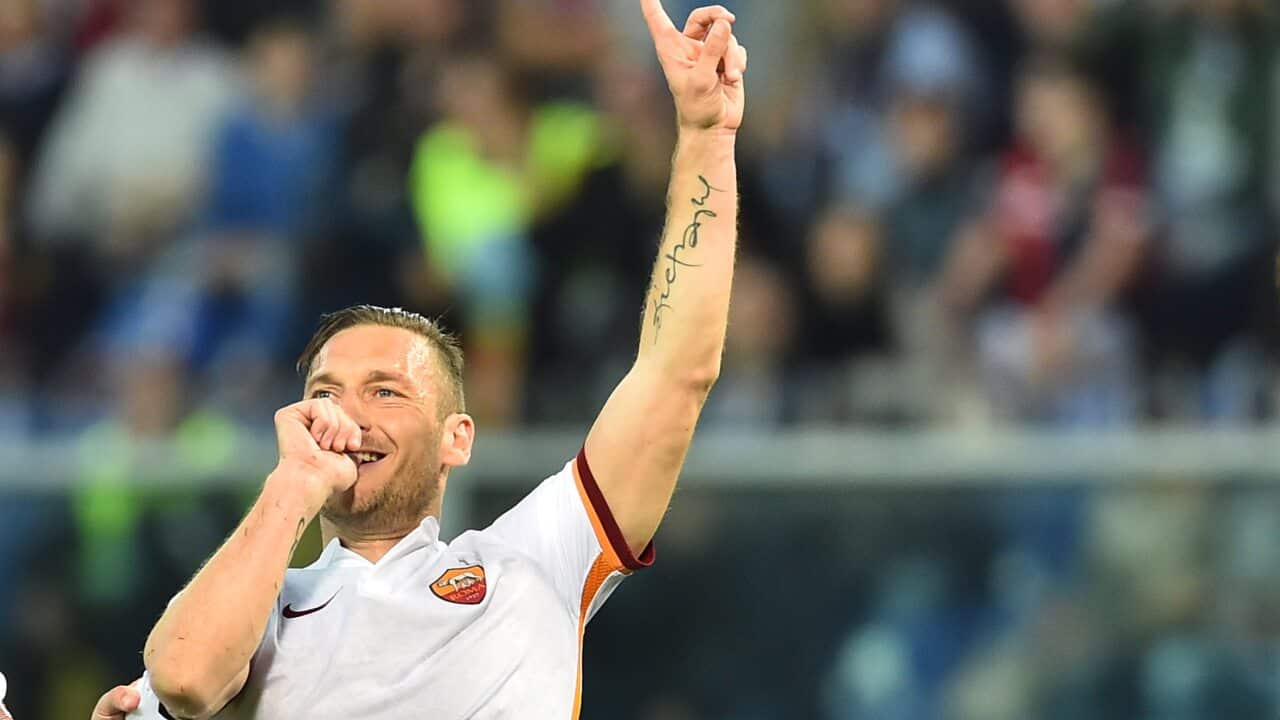 Totti, 39, had scored three key goals from the bench in recent matches and further strengthened his claim for a new contract with the capital club by notching from the bench in Genoa and inspiring Stephan El Shaarawy to plunder a last-gasp winner.

Advertisement
Mohamed Salah's early goal had been cancelled out by Panagiotis Tachtsidis before Leonardo Pavoletti briefly fired Genoa into the lead. That, however, was Totti's cue to come to the party.

Roma knew victory at the Marassi would boost them into second place in Serie A - temporarily at least - and they wasted no time setting about their hosts.

Salah grabbed the opener after only six minutes, the Egyptian playing a one-two with former Genoa winger Diego Perotti before beating Eugenio Lamanna with an angled drive.

But it took the Grifone just eight minutes to equalise. Tachtsidis - a Roma player three years ago - put the ball out of Wojciech Szczesny's reach after collecting Diego Laxalt's assist.

Roma should have restored their lead before the break but El Shaarawy found himself thwarted by Lamanna on three separate occasions.

Genoa used half-time to regroup and returned to the pitch in an ebullient mood.

Suso ran riot in the visitors' half, twice rasping shots just past Szczesny's goal and, in the 66th minute, the Rossoblu got their reward.

Pavoletti was the man in the middle when Tomas Rincon passed into the Roma box and the finish was unstoppable.

Totti had been on the pitch as Perotti's replacement since the hour mark but waited until the 77th minute to make his presence felt.

From a long-range free-kick, the evergreen forward rasped the ball over Lamanna's shoulder to level the tie.

Encouraged by their veteran team-mate, Roma pushed hard for the winner and found it through El Shaarawy three minutes from time.

Edin Dzeko supplied the through ball and Lamanna was soon bested by a powerful effort for the third time in the match.

Gonzalo Higuain reached 32 goals for the season as Napoli beat Atalanta 2-1 at the Stadio San Paolo.


The league's leading scorer notched either side of the break to prevent Roma from moving into the runners-up spot, with Raul Albiol putting through his own net to give the southerners the jitters at the death.

Roma's earlier victory at Genoa had lifted the capital club above Napoli and into second so Maurizio Sarri's men had to respond quickly and effectively.

After some probing by both sides the ball fell nicely for Marek Hamsik, who cut inside from the left to supply Higuain for his 31st goal in 32 matches.

Napoli struggled to make anything else stick in the first half and it was not until the 40th minute that they carved out another half chance, Jorginho setting up Lorenzo Insigne for an acrobatic effort that fizzed past a post.

When play resumed Napoli's Slovakian captain Hamsik danced through the middle of the park, ignoring the available Higuain, before shooting straight down Marco Sportiello's throat.

The hosts hit the crossbar in the 57th minute. Andrea Masiello's mistake in defence allowed Allan to waltz into a one-on-one with Sportiello but the Brazilian could only hit the frame of the goal.

Dries Mertens then nutmegged Rafael Toloi on his way into the Atalanta box, his finish just missing the mark, but in the 77th minute Napoli doubled up.

It was just as well the Argentinian had bagged a brace, as Albiol spoiled Napoli's clean sheet five minutes from time, the former Real Madrid defender accidentally turning Kalidou Koulibaly's attempted clearance over the line.