United refuse to comment on reported talks with Mourinho

Manchester United have declined to comment on reports that the club have held talks with representatives of Jose Mourinho. 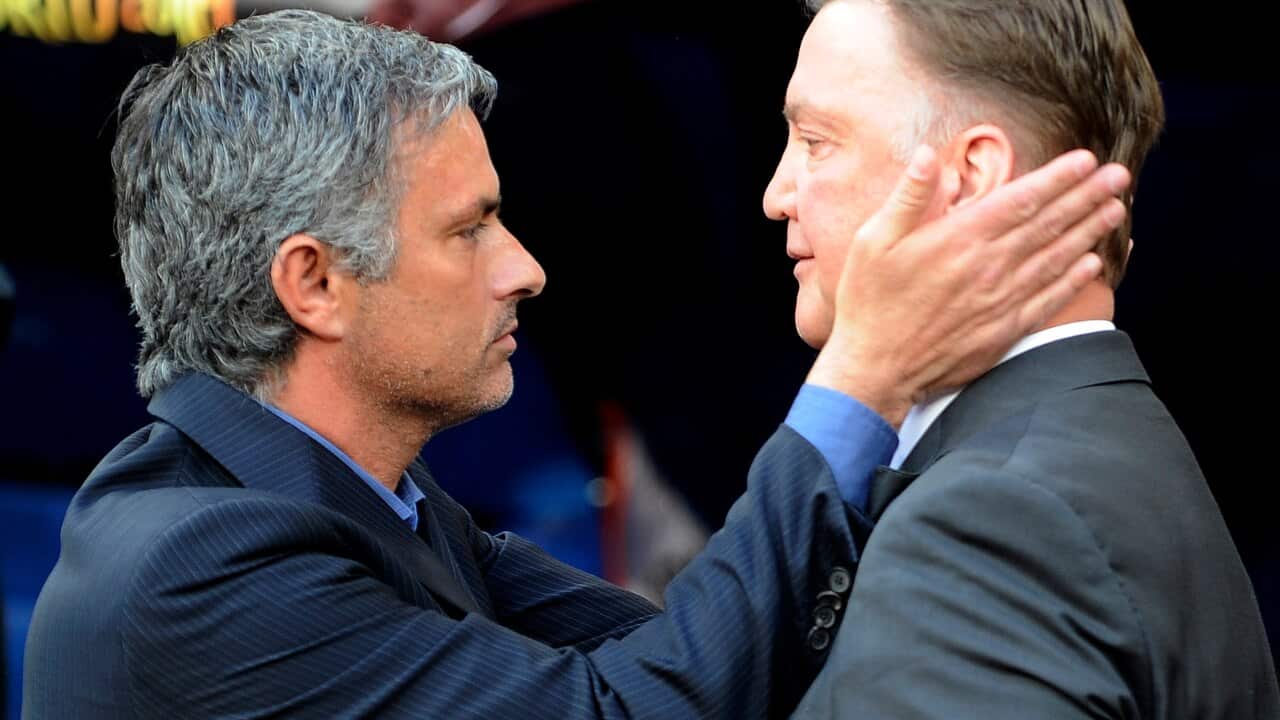 Jose Mourinho, then coach of Inter Milan, and Louis van Gaal, then of Bayern Munich, prior to the 2010 Champions League Final. Source: Getty Images

On Friday evening it was reported by the BBC and the Manchester Evening News that discussions have taken place.

Mourinho, who left Chelsea in December, is widely expected to be considered a contender for the role of United manager should Louis van Gaal depart Old Trafford in the summer.

United offered no response to the report, the latest to link Mourinho with Van Gaal's job.

Advertisement
Van Gaal has a year remaining on his contract after this season, in which he has attracted considerable criticism for the defensive, slow and possession-based style he has brought to United.

Rivals Manchester City announced on Monday that Bayern Munich's former Barcelona boss Pep Guardiola will become their manager in the summer, and United will not want to lose ground on their neighbours.

Mourinho won the Premier League title three times with Chelsea and has achieved success wherever he has managed, including Porto, Real Madrid and Inter Milan.

Van Gaal claimed on Friday that Wayne Rooney was wrong to say United, who play Mourinho's former side Chelsea on Sunday, are now playing with greater freedom.

United captain Rooney suggested after last week's FA Cup victory at Derby that manager Van Gaal had released some of the shackles on the team.

These sentiments were echoed by midfielder Jesse Lingard after United produced one of their best displays of the season to beat Stoke 3-0 in the Barclays Premier League in midweek.

But Van Gaal claims it is more a case of Rooney and Lingard finding form.

He said: "I'm not agreeing with the remark of Wayne Rooney when he said that because it is only that they have more confidence.

"And it is especially so with Wayne Rooney, who is saying that because he has scored seven goals (in seven games). He can say that he is playing with more freedom because he has more confidence.

"But you want to write in your paper that it's because he gets another training session in another style, because Louis van Gaal gives more freedom - no, it is still the same.

"We train still the same way. It is not because of the change of attitude of Mr Louis van Gaal or another way of training. No. I'm sorry to say that. We are always working hard and very professionally in the philosophy of Louis van Gaal.

"And that is also for Jesse Lingard."

Juan Mata has also impressed in his preferred number 10 position in the last two games, leading some observers to ask why the Spaniard has not played in that role more often.

Van Gaal claims it is because the former Chelsea man was not in good enough form last time he tried him there.

He said: "I have already played Mata in the same role. Maybe you remember that. I'm not changing him from that role, he has changed himself because at that time he wasn't good enough. That is the reason.

"It is not the trainer-coach or the manager, but when he is playing like he has played now he shall play at number 10."