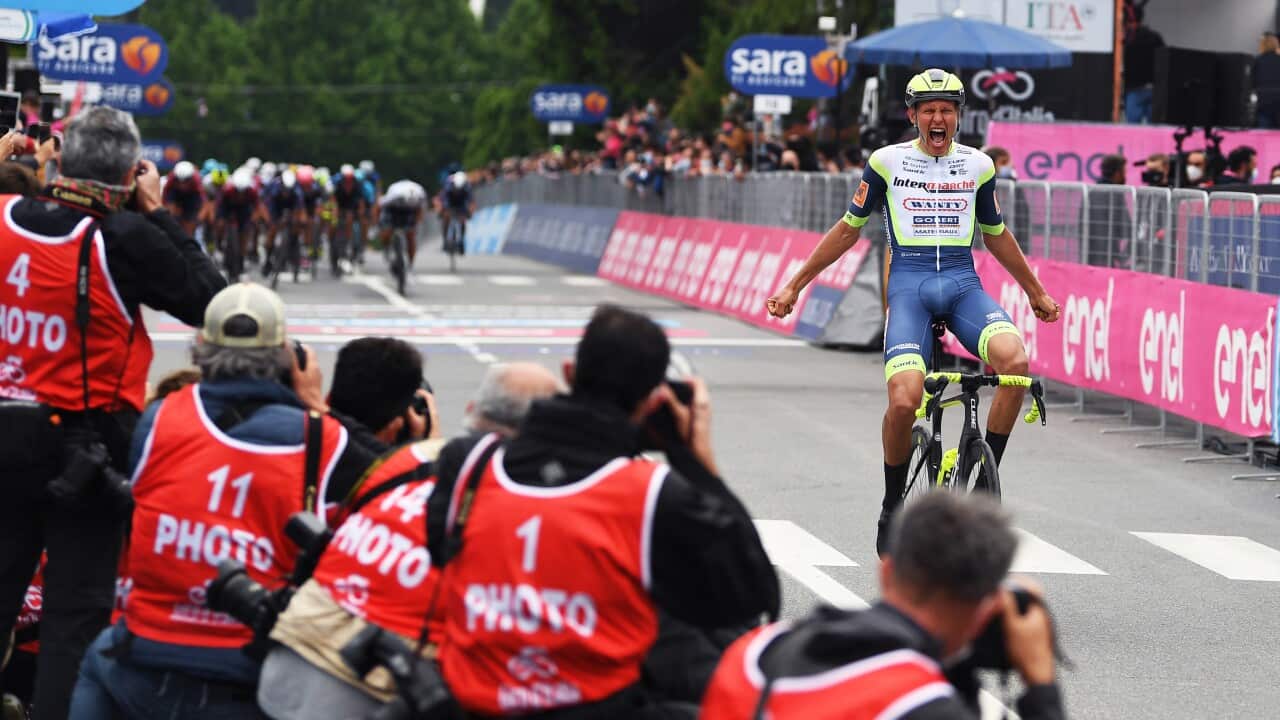 Taking a win on one of the grandest stages of cycling is never easy, but defying the peloton on a day which the sprinters have marked it down for a win is near impossible.

Breakaway riders normally mark down stages where there is little incentive for teams to mount a concerted chase, or at least on terrain where it's a bit more difficult for a larger bunch to navigate narrow roads of winding descents, or similar obstacles. The mountains are also favoured, where the effects of drafting are minimised and a smaller group has a chance to beat the peloton.

None of those factors were in Taco van der Hoorn's favour during Stage 3 of the Giro d'Italia. While not considered a 'nailed-on' sprint at the start of the day with some late climbs promising that a late move would at least be attempted, the first half of the day's racing was entirely flat and the sections between the climbs in the final 80 kilometres looked to be perfect for the chasing main bunch of 175 riders chasing down the eight escapees.

BORA-hansgrohe were chasing for Peter Sagan but also setting a high pace on the climbs so they could put the pure sprinters into difficulty. It was a script that fans of the sport have seen play out a lot of times, the fine edge between making the race too hard for the sprinters, but not too hard so that your own fast finisher can't make it to the finish in the front group and maintaining numbers so that attackers are dissuaded from getting too aggressive.

Rarely does the early breakaway figure in the calculations but the riders in the escape weren't concerned about the normal way these things are won, or the odds. Breakaways on flat stages in Grand Tours typically have an approximate two per cent chance of victory, a stat sourced from
analytical studies of the Tour de France
, and it's a rarity that you'll see it happen on any given year of racing. Divide that two per cent by the number of riders in the breakaway and you have a rather miserable 0.25% chance as Taco van der Hoorn battled his way into the early move.

Even that prognostication looked optimistic with 30 kilometres to go in the race as the peloton closed to within a minute and 20 seconds of the leaders, though van der Hoorn would ultimately drop his rivals from the break and hold off the peloton to secure the win.

Such odds are why you don't see the bigger teams sending riders up the road, with loftier goals of GC performance and saving their energy for more likely stages, it's better back in the main bunch. However, for Intermarche Wanty Gobert Materieaux (IWGM), the newest and least successful of the WorldTour squads, when you're looking for your first win of the season, even desperation moves look good.

"That is the way of course, that is our way," exclaimed an ecstatic Valerio Piva, sport director of IWGM. "We cannot win against the best in the sprint of in the mountains, we have to anticipate and that is what we did today, what we try everyday, like this."


Coming into the final 100 metres to the line, van der Hoorn's stellar performance saw allowed the time to sit up and absorb the atmosphere, though after the finish it almost felt like he was still out there riding the race, holding off the chasing bunch.

“I didn’t know there were only four seconds between myself and the peloton," said van der Hoorn. "Maybe that’s because I celebrated too much in the last 100 metres. I also felt the presence of the peloton but I looked back a few times and I could see they were quite far behind. I knew about the two sharp corners in the last kilometre but I didn’t know how sharp they were.

"It was a big goal for me to go in the breakaway today. I had planned that no breakaway would go without me. It wasn’t the plan to finish off like this but I had to take the small chance I had."

"This first victory of the year means a lot for my new team," said van der Hoorn. "We felt good behind the scenes and we came close at the Tour of Algarve. I’m happy the team gave me a nice program and some freedom after the two years I spent at Jumbo-Visma working for Wout van Aert in the classics or chasing breakaways down for Dylan Groenewegen."

The win won't overly shape the complexion of the 2021 Giro, there are no jersey implications or considerations that will impact the overall contenders. But for one team, one rider, and for all the fans watching the race, this will be a win that lasts long in the memory.

Stage 4 of the Giro d'Italia will be the first test for the climbers with a 4.2 kilometre climb at an average gradient of 9.9 per cent finishing just 2.5 kilometres from the finish in Sestola. The broadcast will start at 1955 AEST on SBS OnDemand, with the coverage beginning on SBS VICELAND at 2125.