It was a case of a bit of revenge for Mathieu van der Poel (Alpecin-Fenix) as he fought back from a few cases of being positioned a bit far back on previous stages, winning the reduced bunch sprint into Gualdo Tadino on Stage 3 of Tirreno-Adriatico. 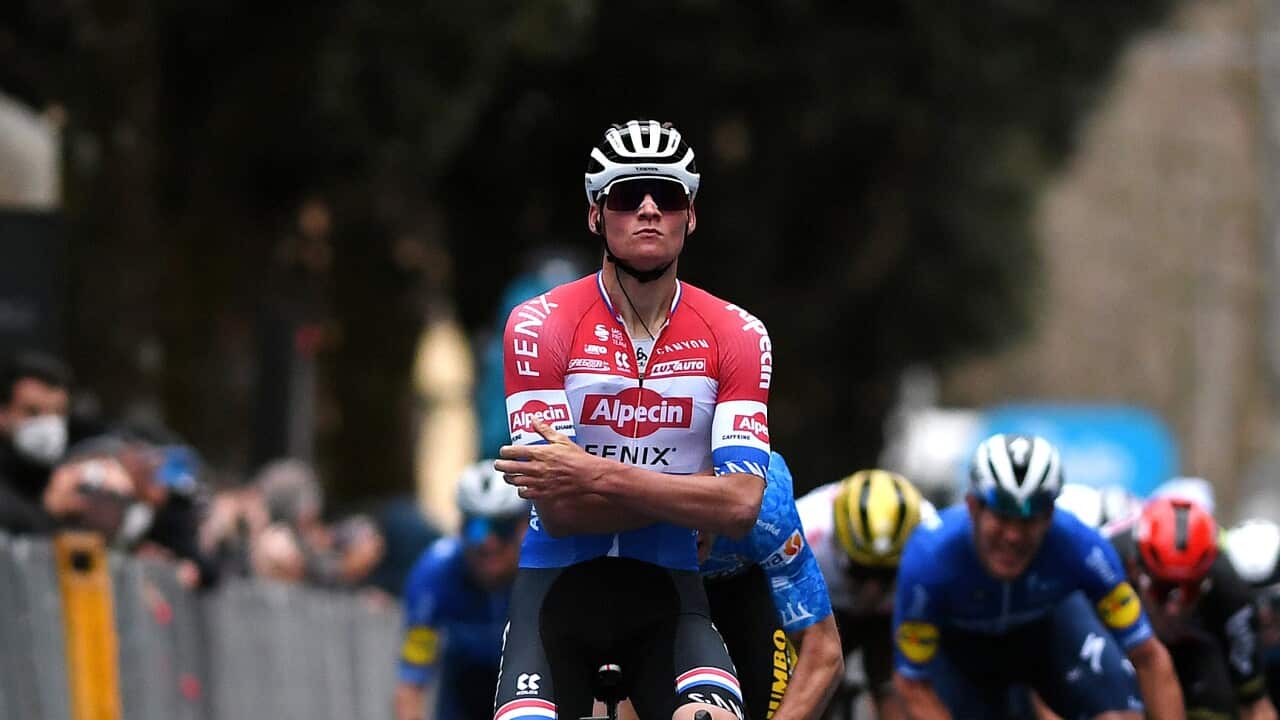 The Dutchman showed his well-known explosive power in the finale to claim the win, while runner-up van Aert may have used up some energy early as he chased down a late attack from Zdenek Stybar (Deceuninck-QuickStep).

Van Aert closed the gap, but could not match van der Poel’s speed when he opened his sprint, and for a second successive stage had to settle for second place.

Advertisement
Van der Poel took his first win of the race, making up for the previous two stages where he started his sprint from well back in the peloton.

“Wout [van Aert] immediately reacted to it," said van der Poel of Stybar's attack. "Otherwise it could have been dangerous. I think I made the right decision, and just followed. It was a really hard sprint, it went uphill a bit, and after such a long stage it hurt.

“I really wanted to win a stage, that’s why I was a bit frustrated with myself yesterday when I made a mistake. I’m really glad to win today’s stage. I was really happy to take the win, especially after the team did an amazing job today to close the gap to the first group.”

The five-man early break that formed at the start of the day contained Mark Padun (Bahrain-Victorious), Davide Bais (EOLO-Kometa), Tobias Ludvigsson (Groupama-FDJ), Guillaume Boivin (Israel Start-Up Nation) and Niki Terpstra (Total Direct Energie). The quintet was given a large amount of leeway by Jumbo-Visma, stretching their lead to nine minutes by the half-way point.

The peloton increased their pace coming into a potential cross-wind section and while some riders were dropped, most were able to return to the bunch.

One who was not able to come back was Caleb Ewan (Lotto-Soudal), who, suffering from gastroenteritis, abandoned the race.

A long, sustained chase from the 60 kilometre to go mark from Alpecin-Fenix managed to close down the six minute advantage the leaders had, catching them with three kilometres remaining as the sprint teams geared up for the uphill run to the line.

There was a significant crash towards the front of the bunch 3.5km from the finish, holding up around a dozen riders, with Egan Bernal, Pavel Sivakov, Geraint Thomas (all INEOS Grenadiers) and Simon Yates (Team BikeExchange) all losing time on the day as a result.

Deceuninck-QuickStep won the battle to position their riders at the lead of the peloton, allowing them to make their move with Stybar. It was snuffed out by van Aert, with van der Poel the beneficiary as the race came down to the final kick to the line.

Robert Stannard (Team BikeExchange) was the highest-placed Australian, sprinting to 13th on the day.