After the Socceroos' dispiriting loss to Norway, an impressive performance against Colombia offers reasons for cautious optimism as the 2018 FIFA World Cup comes into focus. 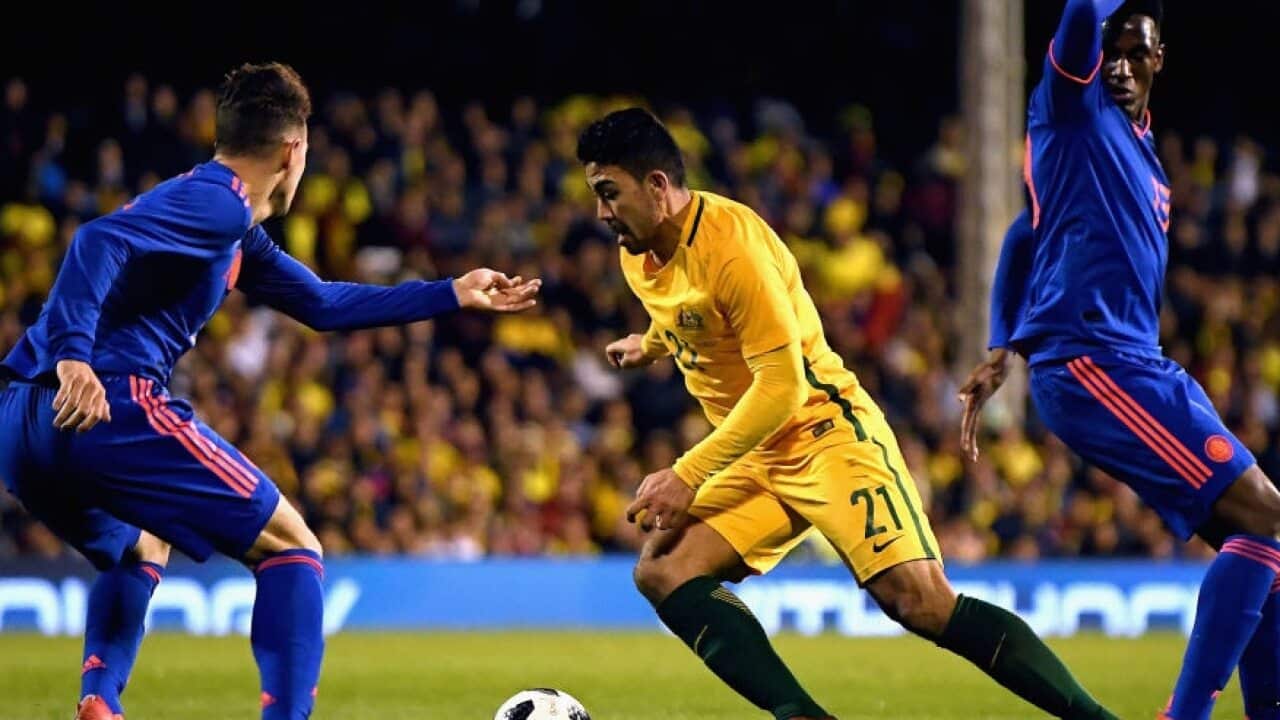 Of the many positives to emerge from Australia’s 0-0 draw with Colombia in London on Wednesday (AEDT), one may be no more than coincidence.

Yet, it bodes well that the Socceroos’ two best performances in the past 12 months have come against South American opponents.

During the FIFA Confederations Cup in 2017, Australia outplayed Chile – then ranked fourth in the world – and were unfortunate to only leave Spartak Stadium in Moscow with a draw.

The performance at Craven Cottage on Wednesday (AEDT) was less emphatic, and the Socceroos can thank the goalpost and custodian Danny Vukovic for denying several shots and a penalty respectively.

But the result and the message sent were the same in both encounters.

This Australian side, widely derided pre-Moscow and again after the horror show against Norway on Saturday (AEDT), can on their day match it with world class opposition.

The Socceroos will need to show similar gusto when they head to Russia in less than three months’ time.

Wednesday's (AEDT) performance would come as a surprise to even the most optimistic fans.

The drubbing at the hands of Norway – ranked so low by FIFA that they are not even on the first page of the list – had some analysts predicting the worst come the World Cup.

Instead, a team almost unrecognisable from the insipid formation in Oslo graced the London pitch.

Massimo Luongo played his best game in Australian colours. Josh Risdon put in a strong performance at the right-back position that has plagued the national team. The ever-mercurial Tom Rogic had moments of brilliance.

And Vukovic, Australia’s oldest debutant in half a century, celebrated his 33rd birthday with an impressive half between the posts - after replacing Brad Jones at the break - as a rear-guard defensive effort ensured the clean sheet.


90 minutes of football does not, of course, provide sufficient empirical evidence for definitive statements about Bert van Marwijk’s team.

Just as scaremongering post-Norway was exactly that, so optimism based on this latest match would be premature.

But the Dutchman has barely had a week with the Australian national team.

Van Marwijk is attempting wholesale revision to a system developed by his predecessor Ange Postecoglou over four years and numerous major tournaments.

Expecting immediate transformation is naive, if not delusional.

The showing at Fulham FC’s home ground provides a ray of hope, even if storm clouds in the form of France, Denmark and Peru linger on the horizon.

The quality of Australia’s opposition deserves to be reiterated.

Led by eventual golden boot winner James Rodriguez, Colombia topped their group at the 2014 World Cup and progressed to the quarter-final before losing to hosts Brazil.

La Tricolor beat France late last week, and are legitimate contenders for the World Cup trophy – some betting agencies have them alongside Portugal and Uruguay in the second-tier of favourites.

Against such vaunted opposition, the Socceroos’ performance was admirable.

With a feeling of broader malaise in Australian sport prompted by the national cricket team’s predicament, and after days of heavy criticism for losing in Oslo, it would not have been unexpected for the team to collapse early and never recover.

READ MORE
After cricket’s catastrophe, it’s time for the Socceroos to step up

They were sorely tested on several occasions in the first-half, but stayed the course.

Postecoglou may be permanently gone, but the strength of character he often commented upon has returned from its hiatus against Norway.

It may in the end be that Wednesday's (AEDT) performance proves no more than a temporary deviation from a fairly depressing mean.

This Australian side lacks the raw talent of recent generations, and Postecoglou’s post-qualification departure could ultimately leave the Socceroos philosophically-confused and in tactical disarray in Russia.

But the draw with Colombia means that that narrative heading towards the World Cup remains ambiguous.

A heavy loss in London would have consigned the Australian football media to 11 weeks of doom and gloom.

Say what you want about the Socceroos, but predictability has never been a core trait.

That remained true on Wednesday (AEDT).

When Australia face Peru in Sochi in late June, the Socceroos will almost certainly need a result to secure progression beyond the group stage of the World Cup for only the second time ever.

When the Black Sea sun shines over the mid-afternoon fixture, van Marwijk will be hoping that his temporarily adopted nation continue their impressive run against high-fancied South American opponents.

In June, the latter might become the latest South American nation against which the Socceroos have performed creditably in trying conditions.

That could prove the difference between success and failure at Russia 2018.