ANALYSIS: It just had to be the Wanderers who inflicted the first defeat of the season on runaway A-League leaders and bitter rivals Sydney FC. 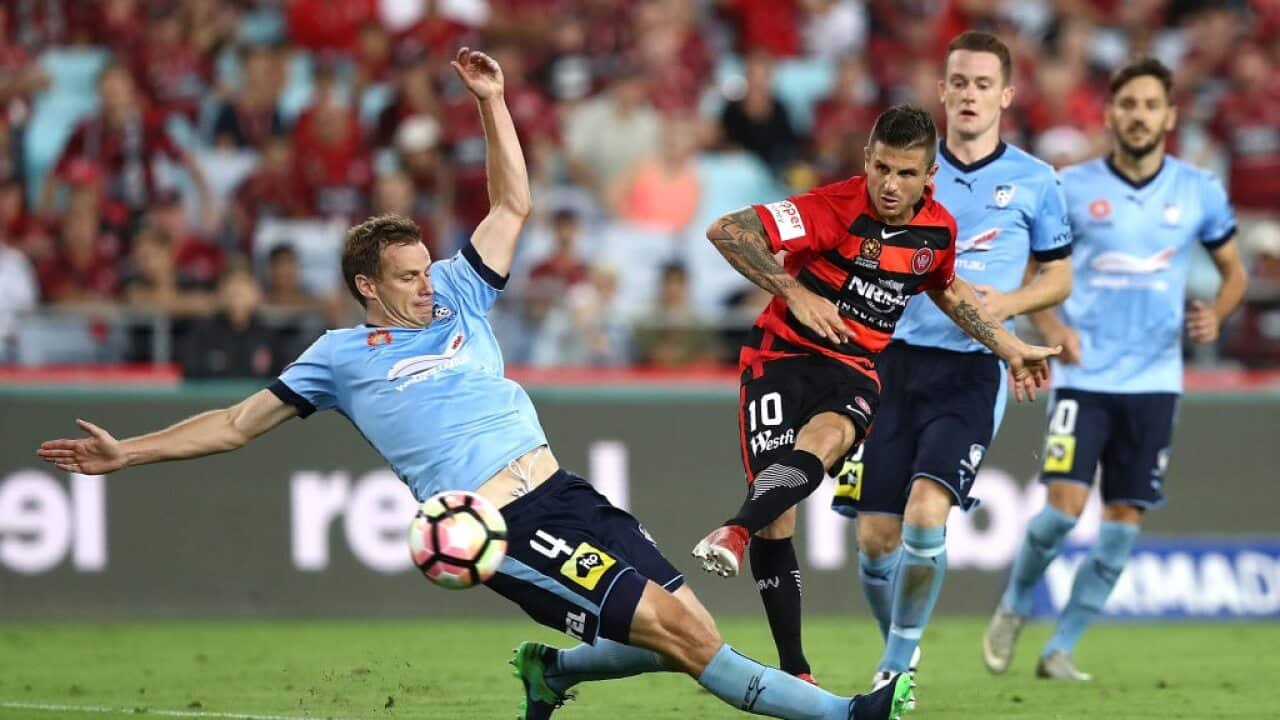 Western Sydney did what no other team had managed to do in 20 rounds and in so doing gave the premiership a new twist.

Tony Popovic's men actually saved the race for the Premiers' Plate from becoming so one-sided that it risked being decided with half a dozen rounds to go.

The Wanderers may have left it too late to challenge for the premiership but their first derby win in three years puts them firmly in the top six, three points ahead of seventh-placed Newcastle Jets.

Advertisement
It remains to be seen if Sydney's nearest challengers Melbourne Victory will take full advantage of the Sky Blues' 1-0 faux pas by beating Central Coast Mariners and reduce the deficit to eight points with seven rounds to go.

Regardless of what happens in the fifth match of the round in Gosford, the meaning of a captivating evening at ANZ Stadium that produced a fantastic derby is significant.

The Wanderers clearly are a better team than their position on the ladder would suggest and their thrilling victory will ease the position of under-fire coach Popovic, who claimed afterwards that he always had the utmost faith in his players' ability and any pressure he or his club might have faced was from outside.

"It has been a long time since we won a derby and it's really nice to send the fans home happy," Popovic said.

"In all aspects of the game we more than matched Sydney. We showed tonight that we are a very good team which I knew we were.

The coach has publicly and repeatedly stated his unwavering faith in the ability of his players ever since the Wanderers were crushed 4-0 in the first derby in round one.

Even when all around him doubts were being expressed whether the Wanderers were strong enough to be title challengers, Popovic remained as positive and stoic as he has been since then chief executive Lyall Gorman urged him over a phone call in 2012 to quit his job as Crystal Palace assistant coach to become the new club's foundation mentor.

Popovic has often said this season that there was nothing basically wrong with the Wanderers and their main problem, apart from a glaring lack of a consistent goal scorer, was that they were not getting the rub of the green.

"I don't think I need to vindicate anything," he said when asked if the stirring victory had vindicated his total belief in his side.

"My belief is my belief. That's for other people to decide. I always believed in the players and tonight they showed how good they are. We now have to be more consistent, that's the challenge for us."

The winning goal came from striker Brendon Santalab, who turned Bobo on a sixpence just outside the six-yard box - what was the Brazilian striker doing there, anyway? - and slotted the ball home.


Yet the architect of the Wanderers' win was Mitch Nichols, who played one of his finest games in months after he reverted to his normal position of attacking midfielder.

Popovic's experiment of deploying Nichols as a False 9 in the previous round against Central Coast backfired spectacularly as the Mariners sprang a surprise to win 2-0 with goals from a proper striker: Roy O'Donovan.

Nichols was here, there and everywhere against Sydney and he ended up winning the indirect tussle with Milos Ninkovic, who started beautifully showing some exquisite touches but the Serb faded away when the game became more robust.

Nichols's lively performance that earned him a rousing reception when he was replaced five minutes from time gave his side a stranglehold on midfield, which is probably where the Wanderers won the contest.

The Sky Blues played their part in a memorable match watched by almost 45,000 fans and they will have justified complaints about at least two strong claims for a penalty going unheeded by referee Chris Beath.


But to his credit, coach Graham Arnold chose not to dwell too much on the controversial incidents that could have swayed the result.

Arnold knows that Sydney have had a few decisions go their way this season and he was never going to scream blue murder after his team had lost their unbeaten record.

He preferred to extol the virtues of both teams who had provided a "good spectacle" worthy of the occasion and the competition.

"It's been a great journey that put us in a fantastic position and I could not be prouder of the boys in these first 20 rounds," Arnold said.

"It (the invincible issue) gave you guys in the media something to write about but now we get back to training on Sunday and work on recovering pretty quickly and rebounding straight away.

"The players are disappointed (by the ref's decisions) but that's football. Some days you get decisions from referees and on others you don't. That's the way it is."