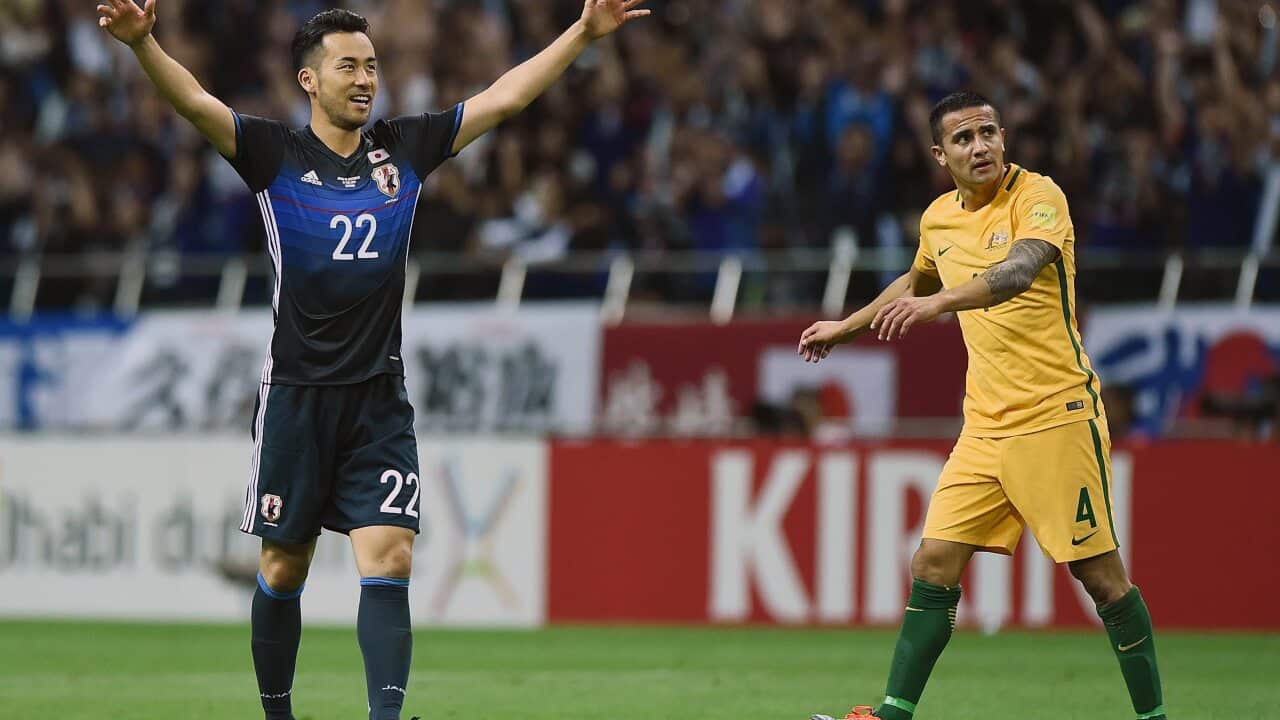 Maya Yoshida of Japan celebrates victory as Tim Cahill of Australia kicks the ball away in frustration Source: AAP

Australia went down 2-0 to Japan in their crucial World Cup qualifier in Saitama on Thursday night in a huge blow to their hopes of an automatic place in Russia next year.

The Socceroos must now beat Thailand and are reliant on Japan either winning or drawing with Saudi Arabia in their final group stage matches on Tuesday to give Australia a shot at direct qualification to the World Cup.

With Japan's victory over Australia guaranteeing their sport in next year's showpiece there are some suggestions they may not play their strongest side against Saudi Arabia.

Advertisement
When asked how seriously Japan would approach the game, Yoshida admitted he had “no idea” what unorthodox Bosnian manager Halilhodžić – who talked mysteriously after the game of personal issues – would come up with.

“I think the manager will try to test some different players, but the manager really is a bit of a weirdo,” Yoshida said. “Sometimes he makes decisions we don't expect, so I can't say anything.”


Yoshida said that Japan’s disastrous start to the final stage of the campaign – losing 2-1 at home to the United Arab Emirates – ultimately served as the catalyst for them to go undefeated thereafter, qualifying for Russia 2018 as the top team in their group.

“We thought when we lost the first game of qualification, we might not go far. That's important. But that kind of motivation was very important for the team and myself. The rest of the players had the same feeling as well,“ he said.

“So I think today we have done very well to win 2-0 against Australia – a country we haven't beaten through the history of World Cup qualification.”

While Japan has qualified for the World Cup for the sixth consecutive time, there was clear tension in the mixed zone after the match, especially among those who played no part in the match – particularly the star trio of Shinji Kagawa, Shinji Okazaki and Keisuke Honda.

Rumours continue to grow that the squad’s senior players are leading a revolt against Halilhodžić, who is increasingly favouring younger players as he seeks to hold on to his job.

When pressed for an interview by local press, Honda declined their advances, simply saying: “I was not part of tonight”.

Yoshida admitted the decision by Australia to put Tomi Juric and Tim Cahill on the bench – with Aaron Mooy withdrawn completely – gave Japan a decisive boost in their 2-0 victory.

Socceroos coach Ange Postecoglou made the dramatic call to play Robbie Kruse as the team’s lone striker, gambling against the fitness of Juric – who was carrying an injury from club duties – and Cahill, who is still in pre-season with Melbourne City.


Mooy was banished from the squad completely due to an illness which developed the night before the game.

Although Kruse battled admirably at the point of the attack, he ended up having to repeatedly having to drop into midfield to help out an overwhelmed engine room, thus denying the Socceroos a true spearhead.

“I'm a little bit surprised because there was no Mooy, Juric and Cahill. It helped us a little bit more than we expected,” Yoshida admitted.

“I think we defended very well and they struggled to bring the ball up, especially when their three backs had the ball. They tried to find the solution but they couldn't.”

Despite Japan's comfortable victory Yoshida said it didn’t necessarily mean they had outright proved they were a better football nation than Australia - a rivalry that is now among the most intense in Asian football.

“This time we won but maybe next time we will lose. So will still have to keep fighting for our lives and for our tradition, which is to be the top of Asia,” he said.

“Obviously they are the top of Asia because they won the Asian Cup.”